Evolutionary scientists claim that the human male chromosome—the Y chromosome—is shrinking.1 Some even predict it will eventually disappear and the genes it currently contains will all somehow be transferred to other chromosomes.2 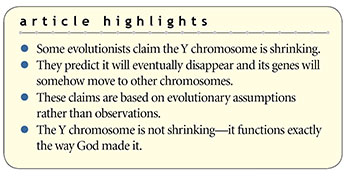 This idea is based on evaluations of modern X and Y sex chromosomes that evolutionists think resulted from an original common ancestral pair of identical chromosomes. They speculate that over long ages “genes have been lost from the Y chromosome in humans and other mammals….[but] essential Y genes are rescued by relocating to other chromosomes.”3 This conclusion was largely based on a study by Jennifer Hughes and her team.The study used the assumption that “the mammalian X and Y chromosomes evolved from a single pair of autosomes [non-sex chromosomes].”4

A problem is, even assuming evolution occurred, we have no knowledge of the common ancestor of mammals, although several candidates have been proposed. One of the more recent is a “tiny, furry-tailed creature that evolved shortly after the dinosaurs disappeared.”5 This 2013 conclusion was considered so radical that some mammalian experts called “for a reevaluation of the evolutionary story of placental mammals.”5 If we cannot decide which animal was the last common ancestor of mammals, how can we begin to determine its genome?

All the Hughes team found was the existing location of certain genes in a select few living mammals.4 The only way to theoretically document the translocation claims is to sequence the actual genes of the mythical common ancestor—which does not exist—and then do the same comparisons Hughes completed to determine their location changes. From this comparison one could determine which genes were lost, which were gained, or which moved to other locations, assuming the X and Y chromosomes were once identical.

But what if the two chromosomes were not originally identical and no Y chromosome “loss” has occurred? I am researching from the perspective that purposeful function exists for the different locations on the autosomes of the various genes identified as once existing on the Y chromosome. Just as word order is critical to the meaning of an English sentence, likewise gene location order has long been known to be important for regulation that produces morphological differences.6 The animals evaluated all have clear behavioral and morphological sexual variations, especially the placental and marsupial animals. Any gene location differences found may contribute to our overall understanding of genetic function if their position is related to behavioral and morphological differences.7

Rather than shrinking and losing function, the Y chromosome operates exactly as God designed it.