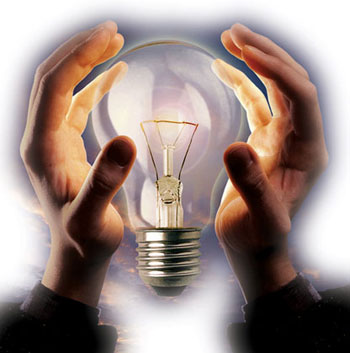 "Argument weak at this point. Thump podium and holler louder!"

This cliché is quoted derisively from time to time to demonstrate that all arguments have presuppositional beginnings that are logically and empirically "weak." Every idea, all religions (belief systems)--even scientific theories--have foundational concepts that are unprovable by physical means and intellectual acumen.

This is so commonly understood and widely accepted that we rarely think about this ubiquitous condition. Everybody believes in something. Even the atheist believes that there is no God; there is certainly no way to "prove" such a concept. All men and women have faith that their particular presuppositions provide an adequate basis for their actions and lifestyles.

That broad set of presuppositions is also known as a worldview.

Dallas Willard relates a concept in his book Divine Conspiracy that he occasionally uses in his classes:

In our culture one is considered educated if one "knows the right answers." That is, if one knows which answers are the correct ones. I sometimes joke with my students at the university where I teach by asking them if they believe what they wrote on their tests. They always laugh. They know belief is not required. Belief only controls life.1

Belief controls life. Now that piece of wisdom is important!

Jesus said it this way:

In 1981, Francis Schaeffer wrote A Christian Manifesto as a response to a "new" Humanist Manifesto. As he opened his critique of the humanist's thinking, Dr. Schaeffer noted the fundamental "change in the overall way people think and view the world and life as a whole. This shift has been away from a world view that was at least vaguely Christian in people's memory (even if they were not individually Christian) toward something completely different--toward a world view based upon the idea that the final reality is impersonal matter or energy shaped into its present form by impersonal chance."2

This wholesale shift in thinking has so permeated the evangelical church that most Christians struggle with the concept of an almighty, omniscient Creator to whom they must answer one day. The pervasive symptom of this change in thinking is the shift away from trusting the revealed Word of God as an absolute source of truth from the God who cannot lie (Titus 1:2).

Many evangelical churches believe that the Bible may "contain" truth, but that one can no longer be certain of its authority, accuracy, or applicability. Science has supposedly rendered the early chapters of Genesis either useless as history or downright deceptive. Scholars have uncovered so-called "new" secrets about the Lord Jesus and about the Bible. Famous preachers, politicians, and celebrities loudly proclaim allegiance to Jesus, only to be exposed in some scandal that would embarrass the heathen.

We have come far--but certainly not in the right direction! What, then, is the possibility or the potential for righteous correction?

Wherewithal shall a young man cleanse his way? by taking heed thereto according to thy word. With my whole heart have I sought thee: O let me not wander from thy commandments. Thy word have I hid in mine heart, that I might not sin against thee. (Psalm 119:9-11)

May the heart of the great Creator, whose word spoke the heavens into existence, draw us this day into a certainty about His inspired word of truth.