Ernie Carrasco is building an ark.

Actually, in addition to working in the Institute for Creation Research’s Internet Ministries department, Carrasco is a student in ICR’s School of Biblical Apologetics (SOBA). And constructing a scale model of Noah’s Ark will fulfill some of his course requirements.

“I’m attempting a Master of Christian Education in Biblical Education and Apologetics, with minors in Genesis Studies, Creation Research, Christian School Teaching, and Sacred Humanities,” he said in a recent interview. “Part of the requirements for each minor is a practicum that will demonstrate mastery of the coursework.”

Minors are not required to obtain the joint biblical education and apologetics major. However, since Carrasco decided to attempt four of them, finding a practicum to satisfy all four posed a challenge.

“Then one Sunday in February, in the wee hours of the morning, God woke me up and put the idea of building a scale model of the Ark on my mind,” he said. “In my ‘night vision,’ He gave me details on how to go about building it, and how it would satisfy the requirements for all of my minors.”

He used the Bible as his primary research tool before starting the construction of the 1/60th scale model. “Dr. Henry M. Morris included some excellent notes in The New Defender’s Study Bible that offer great insight,” he said. Other valuable resources included The Genesis Flood by Drs. John Whitcomb and Morris, as well as Noah’s Ark: A Feasibility Study by John Woodmorappe. 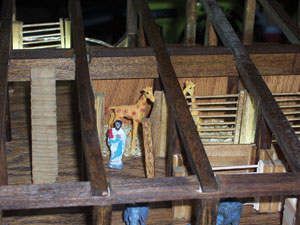 The interior of the model Carrasco started constructing in March 2010 measures approximately 7.5 feet long, 15 inches wide, and over nine inches tall. He said he plans to leave one wall open so viewers can see interior details such as stairwells and animal pens.

Dr. Jim Johnson, Carrasco’s faculty advisor, said the Ark model also helps with his joint major. “He can use it to help teach people about the Ark and its importance, so that’s the biblical education major,” he said. “And then, of course, there are apologetic aspects in the context of the Genesis Flood—understanding how important the Genesis Flood is to understanding biblical history in general, how science fits in with the Bible, and why the earth looks the way it does.”

Carrasco had originally planned to have the Ark model finished in one year to coincide with the completion of his classroom work in spring 2011, after which he’ll work on his thesis. However, he said it’s taking him a little longer. 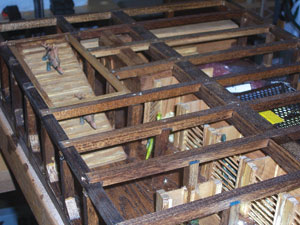 When asked how SOBA has helped him with his project, he said:

I would say that the main focus of SOBA is to equip students to carry out the exhortation of 1 Peter 3:15, which begins with sanctifying the Lord in our own hearts. Without that priority, we “become as sounding brass, or a tinkling cymbal” (1 Corinthians 13:1). With that in mind, my effort in this Ark project is first of all to glorify God with the work of my hands. Secondarily, my desire is to provide a visual apologetic, so that viewers will take the Genesis Flood seriously and be strengthened in their faith in all of God’s Word.

For information about SOBA, visit www.icr.edu.