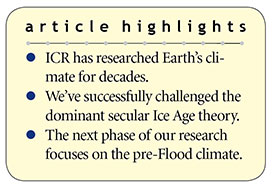 Investigating past climates has long been a major focus of the Institute for Creation Research. Creation scientists Michael Oard and Dr. Larry Vardiman have made significant contributions to our understanding of the post-Flood Ice Age, and ICR’s current climate research builds on their legacy.

During the past two years, ICR has made significant progress in the first area, exposing major problems with the well-known “Pacemaker of the Ice Ages” paper used by uniformitarian scientists to support the most popular secular Ice Age explanation—the astronomical or Milankovitch theory.1,2 These scientists obtained their results using an age assignment they themselves no longer accept as valid.

The creation Ice Age model has a substantial edge over secular explanations.

This research is important for three reasons. First, since additional evidence for the astronomical theory is weak to nonexistent, secular scientists have no convincing reason to believe their Ice Age explanation is correct. This means the creation Ice Age model has a substantial edge over secular explanations.

Second, the astronomical theory is an important dating tool for secular scientists, who frequently use it to assign ages to sediment cores and ice cores, and even to calibrate the dating standards used in argon-argon radioisotope dating. Without a firm basis for this theory, hundreds, if not thousands, of assigned ages may be suspect, even by evolutionary long-age reckoning!

Third, acceptance of the astronomical theory is making subtle contributions to climate change alarmism.3 So, ICR’s research initiative on this subject has been strategic in a number of ways.

Recent additional work on the subject uses secular scientists’ own assumptions and methodology but takes into account other changes they’ve made to the data in addition to the age revision mentioned above.4 These results have been published and are currently accessible online.5 The final results are shown in the paper’s figures 12 through 20. The bottom line is that in these graphs—constructed using chemical and other data from the sediment cores used in the Pacemaker paper—the peaks representing the frequencies at which climate change supposedly occurred and the vertical lines representing the frequencies predicted by the astronomical theory are generally not aligned, which they should be if the data supported the astronomical theory. The data’s agreement with secular expectations is even worse than the results I published in 2016!

Our climate research program’s next goal is gaining a better understanding of the pre-Flood climate. There is still much we don’t know. Some creation researchers claim there was no rain in the pre-Flood world, citing Genesis 2:5-6 as evidence. Other creationists assert that the absence of rain in this passage only applies to the creation week. But if that were the case, why mention it at all? Absence of rain for just five days is hardly noteworthy. So, was there rain in the pre-Flood world or not? And if not, why not? I have an idea I’m now exploring.

This particular research could take a while. In the meantime, there is additional possible evidence that secular scientists assign far too much time to the deep ice cores of Antarctica. This evidence provides a new argument for the relative youthfulness of the ice sheets, a proposal I’ve submitted for publication.

Our climate research program’s next goal is gaining a better understanding of the pre-Flood climate.

Of course, none of these research advances would be possible without your generous support. Thank you for your faithful giving that allows us to push back against a (sadly) never-ending stream of evolutionary misinformation.