Yosemite National Park contains evidence that glaciers once filled Yosemite Valley to a depth of over 3,000 feet, almost to the top of Half Dome, and covered most of the higher elevations in the park. These glaciers are conventionally thought to have occurred over hundreds of thousands of years during several ice ages, the last of which reached its peak about 18,000 years ago. However, if one believes the entire age of the earth is only about 6,000 years, how is it possible for an ice age to have covered the mountains and filled the valleys in Yosemite in such a short time?

This is the primary question being addressed in a current research project at the Institute for Creation Research called the ICE AGE Project. At the Sixth International Conference on Creationism in 2008, it was proposed that a mesoscale numerical model be used to simulate several typical winter, orographic (mountain) storms with warm Pacific Ocean sea-surface temperatures.1

Similar modeling was completed in 1998 using a global climate model for the entire earth.2 It was found that warm oceans produced greatly increased precipitation over the continents, particularly in the polar regions, and they could explain the Ice Age in a young-earth timeframe. But the spacing of grid points used in the model for that study was hundreds of kilometers apart. It was recommended that additional modeling be done for Yosemite National Park with a mesoscale model that had grid spacing of only a few kilometers.

The basic mechanism that is proposed to form glaciers in short periods of time is a warm ocean heated by the events of the Genesis Flood.3 Geologic work was done during the Flood and heat was transferred from magma in the mid-ocean ridges to the ocean. A warm ocean would have produced a giant "El Niño" effect--increased evaporation over the ocean and moisture transported and condensed as precipitation over mountains. The first case study done in Yosemite National Park to test this theory--The Pineapple Express Storm--was completed in December 2009.

The Pineapple Express storm (PEX) is one class of winter storm that affects the West Coast of the United States. It consists of a series of waves that travel along a persistent atmospheric flow from the tropical Pacific, frequently near the Hawaiian Islands, and lasts from three days to as long as a month. Some observers claim they can smell pineapples on the wind during these events. Although this may be an exaggeration, the warm, balmy air during a Pineapple Express event is certainly pleasant during normally cold winter storms. When the warm air is lifted over the Coastal Range and the Sierra Nevada, it precipitates massive quantities of rain at low elevations and snow at higher elevations.

The Pineapple Express storm of December 26, 1996, to January 3, 1997, was simulated with the Weather Research and Forecasting (WRF) mesoscale model available from the National Center for Atmospheric Research.4 Six different sea-surface temperatures (SST) for the eastern Pacific Ocean were simulated. The purpose was to determine the effect of SST on total storm precipitation in Yosemite National Park. 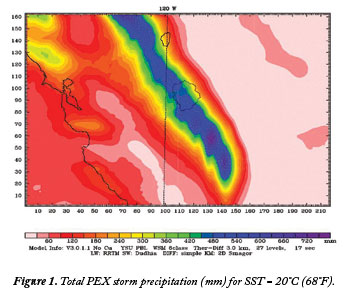 The total eight-day precipitation for one of the six temperatures, SST = 20°C (68°F), is shown in Figure 1. The Pacific Ocean upwind of the California coast was maintained at a constant temperature throughout each of the six simulations. The California coastline is shown in the lower lefthand corner of the diagram; the 120° west longitude line--the north-eastern border of California--is shown as a dashed, vertical line near the middle; Lake Tahoe is near the top center; and the boundary of Yosemite National Park is shown to the right of the vertical dashed line near the center of the plot. The colors indicate the precipitation amount for the storm in millimeters. 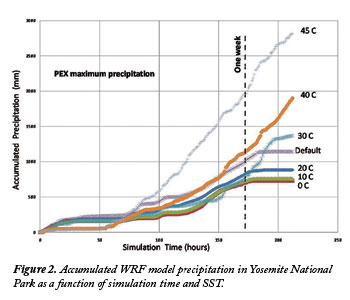 A warm, tropical storm during the Christmas holidays of 1996-97 called the Pineapple Express storm has been successfully simulated. Additional simulations of warm sea-surface temperatures in the eastern Pacific Ocean were conducted to find if precipitation in Yosemite National Park would have been increased by warmer sea-surface temperatures. Precipitation in the park was doubled or quadrupled at the highest temperatures. The enhanced snowfall and greater frequency of storms during the Ice Age appear to be adequate to explain glaciation in the Sierra Nevada in a young-earth timeframe. Glaciers thousands of feet thick could have readily developed in hundreds of years following the Genesis Flood.5