Visitors often marvel at the beautiful columns of rock standing at places like Devil's Tower in Wyoming. There a mountain of rock rises from the ground in a series of regular, multi-sided columns, extending scores of feet into the air. Columns at the Giant's Causeway in Ireland and elsewhere seem so precise that fanciful legends have grown up around them.

These huge columns consist of once-molten igneous rock which was intruded into other sediments, or deposited and later covered with other sediments. As hot, molten lava cools and solidifies, it shrinks in volume and fractures along vertical planes, with geometric considerations often orienting the fractures into five or six-sided polygons. Hardened basalt is usually much harder than surrounding sediments whose erosion often exposes spectacular walls of columns.

Elsewhere, such horizontal layers of vertical columns cover extensive areas, far larger than similar layers which have formed in historic times. This seems to speak eloquently of past volcanic processes being regionally catastrophic, proceeding at rates, scales, and intensities far exceeding the ones we observe today. Surely Earth's geologic past was different from its present, particularly during the great flood of Noah's day. Evidence of catastrophic processes operating on a regional scale—that's what we would expect to find as results of the Flood. 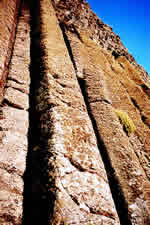 A persistent scientific objection to the Biblical doctrine of the young earth has arisen over this issue, however, claiming that the necessary cooling time for such immense volumes of basalt would take far longer than mere thousands of years. Once again, good scientific research provides an answer, and it has to do with water.

While much heat is removed by simple conduction from the lava to the surrounding rock or air, a surprising amount of heat is removed by water. Water is present in any lava flow or intrusion, and as this superheated water flashes to steam and exits the lava, it carries much heat away with it. Furthermore, as rain or surface water penetrates to the hot layer, it too heats, turns to steam and leaves, cooling the lava. Experiments and observations have shown this convection of heat to be the key. Measured rates of cooling from the surface to the interior exceed several feet per month. The vertical joints which form the distinctive columns facilitate the migration of water in and steam out of the rock.

The next time you notice these interesting vertical columns, just think of the great Flood of Noah's day. Think of catastrophic events, on a large scale and at a rapid pace. And put it all in its "Back to Genesis" perspective.

See more on the formation of basaltic columns.