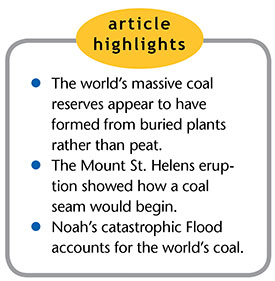 When I drive from Dallas to Colorado, I sometimes see southbound trains loaded with coal from vast reserves buried in Wyoming rock layers. This coal helps power the homes and industries of the almost eight million folks in the Dallas-Fort Worth metroplex.1 How did all that coal get buried there?

For a society that uses so much coal, we seem to know very little about its origins. Truth be told, coal formation holds mysteries. We can’t travel back in time to see what happened, but we can do experiments and follow clues that refine our ideas.

What clues does the standard story offer? Peat has played too big a role when it comes to explaining coal. According to the United States Geological Survey, “Peat is the precursor to coal.”2 How do they know? Peat does not form coal today. Peat bogs and coal beds both contain bits of wood, but they have many other differences.

These clues suggest a more catastrophic origin for coal. The 1980 eruption of Mount St. Helens was violent. It leveled a forest, dismembered its trees, and washed tree trunks into a lake. Jostling trunks soon rubbed off their bark, and bark peat built up at the bottom of the lake. During the Genesis Flood destruction, more jostling of more trees would have made more peat. 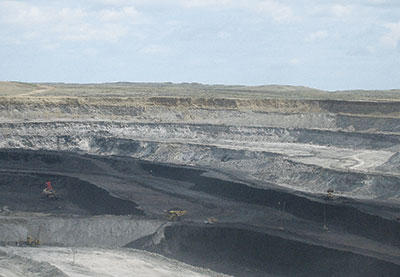 Coal mine in the Powder River Basin of Wyoming.
Image credit: Copyright USGS. Public domain. Used in accordance with federal copyright (fair use doctrine) law. Usage by ICR does not imply endorsement of copyright holder.

Some coal seams in the eastern U.S. are made almost entirely of tree bark. A watery catastrophe thousands of times bigger than Mount St. Helens could have begun the sorting process that led to these eastern coals. Lake-bottom bark would need to be buried and heated to coalify. The rapid burial of massive volumes of plant material torn loose during the Flood accounts for today’s extensive, buried coal layers.

Anyone with mud, sticks, and fire can make a coal-like material called charcoal.5 Geological coal and charcoal are both black, but coal seams have tiny layered structures. Nobody knows for sure what causes this. Experiments with water and coal suggest that different temperatures change the chemistry.6 Often these experimenters presume millions of years of buried peat. Flood-friendly researchers might someday come closer to copying the coal creation process.

The Powder River Basin coal seam in Wyoming is up to 200 feet thick and extends for 75 miles!7 Its energy can keep powering North Texas air conditioners through many more sizzling summers. An immense effect like this requires an immense cause. What blasted, broadcast, buried, then baked so much ancient plant matter in coal seams around the world?

The Bible clearly says the waters of Noah’s Flood covered the whole earth (Genesis 7:19). While a few mysteries stay buried with the coal, the Flood gives the large-scale, catastrophic, watery origins that coal seam clues demand.