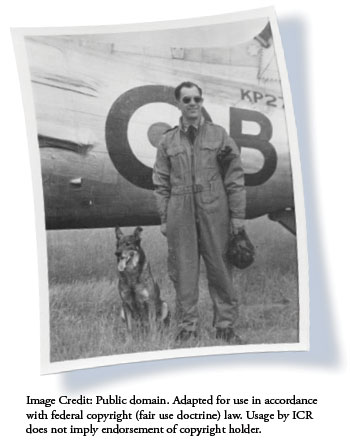 If dogs were meant to fly, they would have bodies designed for it. Flying at altitudes so high that the lack of oxygen is a serious problem requires bodies specifically equipped for breathing thin air. This need is illustrated by an amazing German Shepherd named Antis that flew in combat missions during World War II at altitudes of up to 16,000 feet.1 How did this dog survive flying in oxygen-starved altitudes?

British Air Ministry regulations prohibited dogs flying on combat missions, of course, but Antis hated to be grounded if that meant being separated from Robert. In June 1941, Antis took matters into his own paws. He disappeared when Robert readied for a bombing mission over Bremen, a German port city, and hid inside the Vickers Wellington bomber on which Robert served as turret gunner.

Wellington bombers flew as high as 16,000 feet, so air crews wore oxygen masks to compensate for the oxygen-thin air at that altitude. But no one equipped Antis for such conditions! Robert concerned himself with the crew’s mission, bombing Bremen’s oil refinery, until his attention was distracted by someone nudging his elbow.

Antis must have somehow crept aboard the aircraft and stowed away, being careful to remain hidden until [Robert’s airplane] was almost over her target. Recovering from the shock, Robert tried to take in all that he was seeing. His dog’s flanks were heaving, his lungs desperate for breath, which was very likely why he’d alerted Robert to his presence. They were climbing to 16,000 feet and Antis was having increasing trouble breathing in the thin, oxygen-starved atmosphere.1

Antis needed to inhale concentrated oxygen immediately or die, but so did Robert until the plane descended to a lower elevation.

Taking a massive gasp himself, Robert unstrapped the oxygen mask from his face, bent, and pressed it firmly over his dog’s muzzle. He watched anxiously as the dog took a few deep breaths of life-giving oxygen, before eventually his breathing seemed to settle down to something normal.1

Meanwhile, Robert busied himself with his duties as turret gunner, wearing the spare radio headset since his oxygen mask strappings contained his usual headset.

The mask contained [Robert’s] main radio pickup, and he could only imagine that he and his dog were going to have to share oxygen for the remainder of the flight. A few moments later he heard a squelch of static in his earpiece, signifying that someone was coming up on the air [intercom]. “Robert, have you gone to sleep down there?” Capka, their pilot, queried. “No. Why?” Robert replied. “Sounds like you’re snoring your head off. What’s going on if you’re not snoozing?”1

It was Antis’ canine breathing being broadcast through the airplane’s intercom from the microphone attached to the oxygen mask. Meanwhile, the flight became more hazardous.

They began their bombing run at 15,000 feet, an altitude where the dog needed the oxygen. Robert had no option but to continue operating without it, for he couldn’t keep switching the mask with his dog. He needed his hands free to operate the guns. At first he seemed to cope just fine, but then his heart started to race and beads of sweat were breaking out on his forehead.1

Antiaircraft fire exploded nearby, bombs dropped from Robert’s plane, and Messerschmitt fighters tried to shoot the Wellington out of the night sky. But Robert, his crewmates, and Antis successfully returned to their home base. Of course, Antis’ stowaway antics were then no secret.

[Antis’ oxygen mask] consisted of a standard pilot’s mask, cut and modified to suit a German shepherd’s long and slender snout, as opposed to the flatter, boxier face of a human. The mask attached to his head with a special set of straps that ran around the back of his thick and powerful neck, with extra fastenings latching on to his collar. Antis didn’t particularly like the thing, but he proved happy enough to wear it so long as Robert was wearing his.1

Antis continued to have many death-defying adventures during the war as Robert’s loyal companion. But at high elevations Antis no longer needed to share an oxygen mask with his master.

Obviously, like humans, Antis wasn’t born with the capacity to survive in oxygen-thin air without the help of an oxygen mask—and it required purposeful design and intentional engineering to equip this dog for such high-altitude conditions. We can and should marvel at the creative genius and technical problem-solving that achieved a solution to Antis’ need for high-altitude oxygen.

What about high-flying birds that have no such oxygen mask? How can they survive elevations of 15,000 feet and sometimes higher without a supplemental source of oxygen? Many bird migrations occur at extremely high elevations: 21,000 feet for the mallard duck, 27,000 feet for swans, even 36,000 feet for vultures!2

The highest-lying permanent settlements, in the Andes and in Tibet, are situated at just above 5000 m. [16,400 feet]. Not even people belonging to these mountain communities would be able to survive more than a few hours in the oxygen-deficient air above 8000 m. [26,200 feet]. The oxygen content of the air is about 21%, independent of altitude, in the troposphere; the oxygen pressure consequently decreases in parallel with the decreasing air pressure at increasing altitude. At 6000 m. [20,000 feet] the oxygen pressure is only half what it is at sea-surface level; at 8000 m. [26,200 feet] it is a third of that and at 10,000 m. [32,800 feet] only a quarter. The ability of birds to stay alive at high altitudes is explained by the [comprehensive] fact that they have a more efficient respiratory system than mammals.2

How are birds able to breathe in such oxygen-starved conditions? What they have—thanks to their Creator—is much more efficient than Antis’ custom-made oxygen mask!

A bird’s lungs function according to the through-flow principle: the inspired [inhaled] air collects in the bird’s posterior air-sacs and flows through the lungs to the anterior air-sacs before it passes back out. In the lungs the blood is oxygenated by fine air capillaries, where air and blood flow in opposite directions. Owing to this counterflow, the oxygenated blood that leaves the bird lung acquires a higher oxygen concentration than that corresponding to the oxygen pressure in the expired [exhaled] air.2

In addition to flow-through lungs, birds have hearts that are proportionately larger to their bodies than those of mammals—from 0.8 to 1.5% of total body mass, compared to mammals, which average around 0.6%. The birds’ larger hearts enable speedy blood transport and intensive oxygen renewal.2

Three cheers for the East Wretham fitters who tailor-made a canine oxygen mask for Antis’ high-altitude breathing. And credit is due to Vickers-Armstrongs (Aircraft) Ltd., the manufacturer of the Wellington bomber that Robert and Antis flew in.

But how much more we should cheer and commend God for how He designed and constructed high-flying birds3 with incredible respiratory physiologies far superior to any manmade system or equipment!