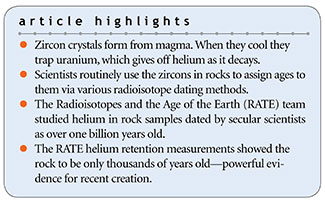 Zircons are tiny crystals of zirconium silicate (ZrSiO4) that originate in igneous rock, which forms when volcanic magma cools. It’s a very stable mineral that melts at 2550°C. Zircon is harder than quartz and almost as hard as diamond. Because of these characteristics, zircon is the mineral most frequently used in various radioisotope dating methods for dating rocks assumed to be at least a few hundred million years old. Its ability to retain impurities within its crystal lattice is very important in establishing the validity of these dating methods. 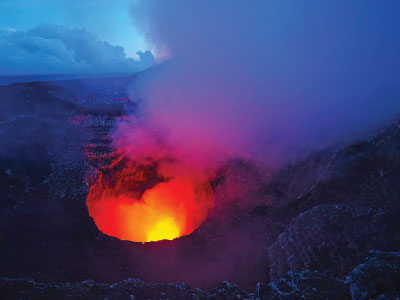 Zircon crystals usually contain trace amounts of uranium (U) and/or thorium (Th) when they cool. Once the zircons solidify, the uranium and/or thorium are trapped in the zircons’ crystal lattice and begin to undergo radioactive decay. As they decay, they produce helium and cause defects in the crystal due to radiation damage.

Each uranium atom produces eight helium ions through its decay chain, and each thorium atom produces seven helium ions. These ions then pick up two electrons from the crystal lattice to form a helium atom. The trapped helium atoms then move from regions with large numbers of helium atoms to regions with fewer helium atoms via a process called diffusion. A minimum energy is required for diffusion to move helium through the crystal. This energy is called the activation energy (E), which depends upon the number of defects or imperfections in the crystal. Figure 1 presents a visual schematic of how the helium atoms move through the zircon crystal.1 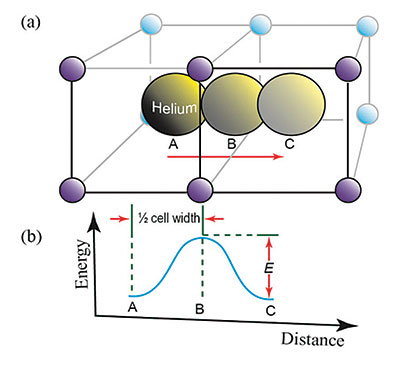 Experiments show that the rate at which the concentration (particles per unit volume) of an impurity such as a helium atom changes at any given location in a crystal lattice is in proportion to the divergence of the concentration gradient within the entire crystal, i.e.:

where D0 is a constant independent of temperature, E0 is the intrinsic activation energy characteristic of the material in which diffusion is occurring (in this case a zircon crystal), and R is the universal gas constant. If the crystal has defects such as vacancies in the crystal lattice, dislocations, impurities, damage from radiation, or grain boundaries, then the basic equation is modified to: 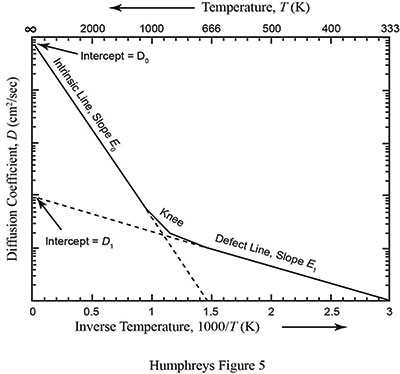 where D1 and E1 are the modified diffusion constant and activation energy for a damaged crystal. The defect parameters D1 and E1 are almost always smaller than the intrinsic parameters D0 and E0. Due to this feature of diffusion, the slope of the defect line is almost always shallower than the slope of the intrinsic line. Figure 2 is a graphical representation of a typical diffusion curve.2 Because defects are very common in naturally occurring crystals, especially crystals containing radioisotopes, the two-slope curve seen in Figure 2 is typical.

With these concepts in mind, we will look at the experimental investigation initiated by Dr. Russell Humphreys and his colleagues on the Radioisotopes and the Age of the Earth (RATE) team into retention of helium atoms in a supposedly 1.5 billion-year-old rock.3 The granitic rock from which the zircon crystals used in these studies came was classified as biotite granodiorite, an igneous rock.4

In the 1970s, geoscientists from Los Alamos National Laboratory drilled core samples at the Fenton Hill site in the Jemez Mountains of New Mexico. In borehole GT-2 they sampled the granitic Precambrian basement rock. This rock was assigned a radioisotope age of 1.5 ± 0.02 billion years as determined by various secular dating methods using U, Th, and lead (Pb) isotopes. The depth of the samples varied from near the surface to 4.3 kilometers in depth, with in situ temperatures ranging from 20°C to 313°C respectively. The Los Alamos team sent some of the core samples to Oak Ridge National Laboratory for isotopic analysis. Robert Gentry, an Oak Ridge physicist, analyzed zircons extracted from these samples for total helium content by heating them to 1000°C in a mass spectrometer in which the amount of 4He liberated was measured. 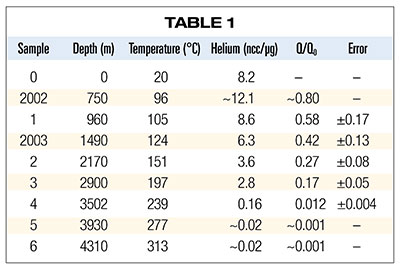 Table 1 summarizes the results of his measurements plus two additional samples (designated as 2002 and 2003) analyzed by Dr. Humphreys and colleagues as part of the RATE project.5 Column 1 is the sample designation, and columns 2 and 3 list the in situ depth and temperature for each sample respectively. Column 4 lists the volume of helium liberated (at standard temperature and pressure) in the laboratory per microgram of zircon (1 ncc ≡ 10-9 cm3). Column 5 is the ratio of the observed quantity of helium in the crystal (Q) to the calculated quantity of helium that would have accumulated and been retained in the crystal (Q0) had there been no diffusion of helium out of the crystal. Uncertainties in calculating Q0 dominate the estimated errors listed in column 6.

According to the dependence of diffusion on temperature outlined in earlier paragraphs, we would expect to observe that the hotter sample 6 would have much less helium than sample 5. The fact that the helium content didn’t decrease suggests that some additional effect may have come into play above 277°C. So, sample 6 wasn’t included in the analysis of samples 1 through 5 by the RATE researchers. 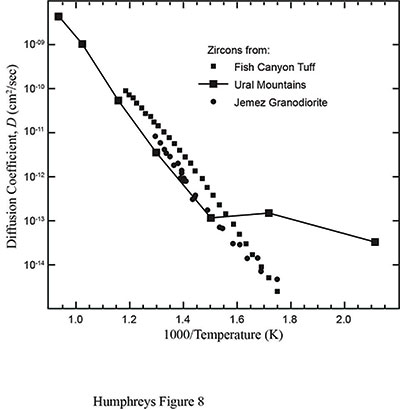 Next, the RATE team needed to measure and study the diffusion characteristics of zircon and the surrounding biotite in order to understand what the data in Table 1 really meant. In 1999, they looked for any available data on helium diffusion in zircons and biotite. The only data they could find were from Sh. A. Magomedov, who had published data for radiogenic Pb and helium diffusion in highly radiation-damaged zircons from the Ural Mountains in Russia.6 Helium data only appeared as a graph. Then in 2001, the RATE team received a preprint for a paper by P. W. Reiners and colleagues listing new helium diffusion data in zircons from several sites in Nevada.7 A graphical summary of those data is presented in Figure 3.8

These data, combined with data for the diffusion constants in muscovite and biotite (two forms of mica), convinced the RATE team that the zircon rates for helium loss were more important than those for the surrounding medium. With these data in hand, the team acquired new samples from the GT-2 borehole and sent them off to a recognized expert in diffusion measurements for analysis.9 These constitute the data points (blue dots with error bars) in Figure 4.10 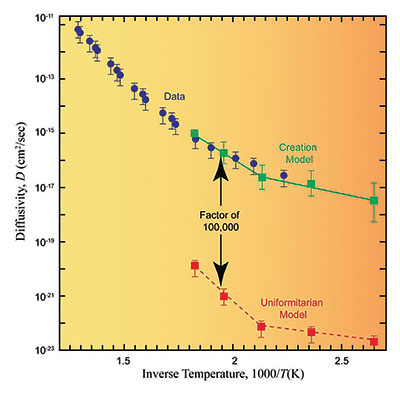 The RATE team was then faced with developing two models for the migration of helium out of the zircon and into the surrounding biotite. One model was based on a creationist view of history and the other was based on the billion-year uniformitarian view.11 Figure 4 compares the data with the model predictions.

Clearly there is a considerable and irreconcilable difference between the two models. The creationist model agrees remarkably well with the actual data; the uniformitarian model predicts diffusivities more than 100,000 times lower than the actual data show. The data predict that within the uniformitarian model all zircon samples would retain much less helium than is observed. Rearranging the diffusion equation for the creation model, one obtains an approximate age for the GT-2 borehole rock of 5,680 ± 2,000 years—as compared to the assumed 1.5 billion-year age in the uniformitarian model. The RATE team concluded that although approximately 1.5 billion years of U/Th decay at today’s decay rates occurred within the GT-2 borehole rock, helium generated by that decay had only been escaping for about 5,700 years, which is why large amounts of helium were still present in the zircons. This discrepancy can be resolved if there was a time in the past in which nuclear decay rates were much higher. This is strong observational evidence that at some time in the past, accelerated nuclear decay did occur.

Obviously these findings set the secular science community into a frenzy, so much so that all types of objections to the experimental data and its interpretation have arisen. These questions and objections have been more than adequately answered by the authors of this investigation.12,13 Ultimately it comes down to which version of history one believes: Do you prefer the naturalistic view of history or the extremely clear biblical narrative? The RATE zircon/helium measurements showing only thousands of years provide powerful evidence for recent creation.