“Can you hunt the prey for the lion, or satisfy the appetite of the young lions, when they crouch in their dens, or lurk in their lairs to lie in wait?” (Job 38:39-40) 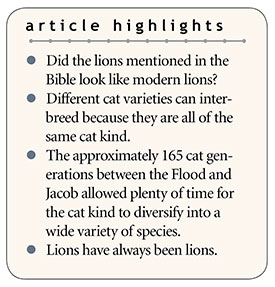 When God spoke to Job and his friends, He referred to animals they all knew. Did the animal He called a lion look the same as what we call a lion today? A historical sketch of lions helps show how such studies can confirm the Bible.

During the creation week, God created each animal to reproduce “according to its kind.” Much later, Noah’s family brought two of every kind onto the Ark.1 Are lions their own kind, or are they part of a larger reproducing group?

Unexpected cat varieties can interbreed, especially in captivity. For example, a lion crossed with a tigress produces a liger. A tiger crossed with a lioness produces a tigon.2 Ligers and tigons share genetic and physical features of both parents. Sometimes they have both tiger stripes and faint lion spots. The fact that lions and tigers are interfertile shows that they belong to a single animal kind. Do other cats also belong in the group?

Many different cats can interbreed.3 When added together, they form a string of breeding varieties that includes all cats. This means that today’s lions, tigers, jaguars, leopards, and even house cats descended from just a few generic-looking cats.4 And those must have descended from the two cats on board Noah’s Ark. 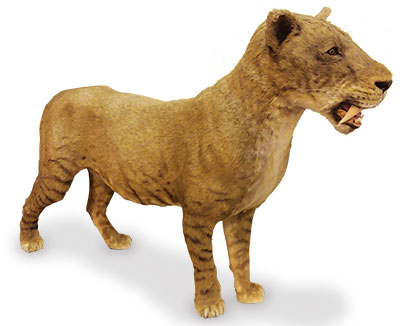 The female Machairodus that will reside in ICR’s Discovery Center

Could cat varieties such as lions have established themselves in the time between the Flood and Jacob’s comparison of his son Judah to a lion?5 Jacob died in 1859 BC according to a biblical timeline.6 I estimate a date for Noah’s Flood at about 2518 BC.7 Subtracting, we find 659 years from the Flood until Jacob’s mention of lions. It takes about four years before a lion reaches the proper size to take over a pride and sire cubs. Smaller wildcats like the ocelot and lynx take about 2.5 years between generations, and caracals only one. Using the longer lion generation time gives 659/4 = 165 cat generations between the Flood and Jacob. This is plenty of time for the cat kind to be fruitful, multiply into a range of cat varieties, and fill the rapidly changing post-Flood earth.

Long after Jacob, lions still lived in Israel during Samson’s lifetime, and one of King David’s top warriors won fame for killing a lion.8 Over 1,200 years after Jacob, Nebuchadnezzar, the Babylonian king who destroyed Jerusalem in 587 BC, constructed his grand processional way at the entrance to Babylon. The Louvre in Paris holds one of its lion panels. Lions no longer inhabit the Middle East. Changing climates and run-ins with people reduced their numbers. Lions and their habitats continue to shrink today. 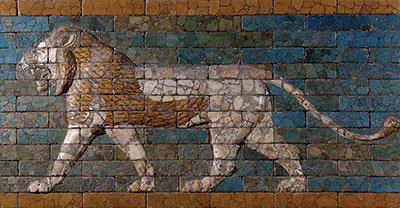 Lions have always been lions.

Lions once roamed the Middle East—so say both the Bible and archaeology. Cats had plenty of time to separate into lions, bobcats, Smilodon,9 and others by the time God spoke of lions to Job.10 Yet, they all remain cats to this day, just like Genesis said.The lions of Job’s day probably looked like today’s African lions. Studying these great cats helps us see the Bible’s reliability.