Has Einstein's Limit on the Speed of Light Been Broken? | The Institute for Creation Research
Skip to main content

A consortium of 174 scientists at the CERN and LNGS laboratories announced on September 23, 2011, that they had observed neutrinos traveling 0.0024 percent faster than the currently accepted value for the speed of light.1 If true, this could unravel Albert Einstein’s theory of relativity, or at least cause it to be modified. The famous formula E=mc2 has stood firm for over 100 years and has been incorporated into much of our understanding of space and time.

The implications are enormous. However, such a major finding will require additional scrutiny before it is accepted. And, even if accepted, it may only apply to very specific circumstances. Would such a finding impact recent creationist research?

The OPERA Project (Oscillation Project with Emulsion tRacking Apparatus) is a European experiment whose main goal is to detect neutrino oscillations from the appearance of leptons in a detector located a long distance from a high-energy source of neutrinos. The beam of neutrinos is created by the Super Proton Synchrotron at CERN (European Centre for Nuclear Research) in Switzerland, which directs the beam through the earth toward an underground target at the Gran Sasso Laboratory (LNGS) in Italy 730 km (453.6 miles) away. 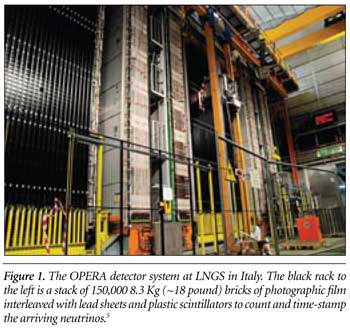 The baseline was also measured to a high precision. The distance between the focal point of the target and the OPERA reference frame was precisely measured in 2010 following a dedicated geodesy campaign. The distance was determined to be 730,534.61 ± 0.20 meters (453.93316 ± 0.000124 miles). This measurement precision is about 8 inches. 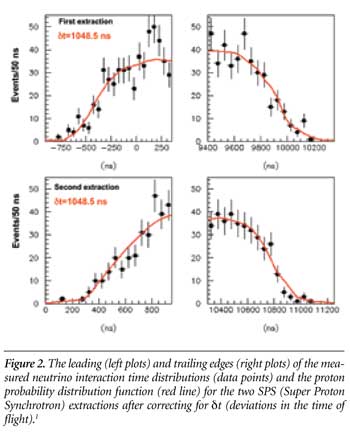 The authors slide the red line along the horizontal axis and determine when it best matches the points. This supposedly gives an accuracy of about 10 nanoseconds. This seems too strong a claim, since the horizontal error on the points (the bin width) is five times bigger than this. Also, they seem to assume the red line and the points should match exactly. There seems to be no allowance in their systematic uncertainties for the possibility that the red line might not be a true reflection of the shape of the neutrino “turn on” and “turn off” at Gran Sasso.

For example, at CERN where the red line is measured, all the protons are included in the time profile. By the time the beam gets to Gran Sasso, it has fanned out and is big enough that OPERA only sees neutrinos from part of the beam. So, any correlations between the production time of the neutrinos (where they are on the horizontal axes of those plots) and the angle they are produced at (which determines whether or not they actually get to OPERA) could distort the shape, leading to an uncertainty in the fit and hence an uncertainty in the speed.

Also, note in Figure 2 that the red lines trace a curve that is far from many of the data points. Some are even outside the standard errors shown on the plot. The method by which the statistical error was computed may not adequately account for the variance between the neutrino and proton probability distribution functions.

If the findings of the OPERA group turn out to be true, how would such a finding affect creationist research? For many years, creationists were highly skeptical of relativity and quantum mechanics. But in recent years more and more young-earth creationists have come to believe that relativity is beneficial to young-earth thinking. Humphreys,7 Hartnett,8 and Gentry9 have each used the general theory of relativity to build a case for their cosmogonies. Each has solved various aspects of the mass, space, and time issue in a young universe by solving Einstein’s field equations by using different boundary conditions or suggesting additional coordinates. For example, Humphreys has suggested that rapid expansions of the cosmos at creation and the Flood would have caused time to be accelerated at distances far from earth, permitting light to reach earth from outer space in only thousands of years, not billions.

On the other hand, if the speed of light is found to be changeable under various conditions, this lends credence to the creationist view that basic physical constants are changeable. ICR’s RATE project found evidence that nuclear decay rates have changed in the past.10 Since decay rates, the speed of light, and other constants are tied to each other through physical laws, it’s becoming easier to justify the view that many parts of the cosmos could have been affected by processes that operated in different ways and at different rates in the past.

Of course, Christians who accept the Bible as the Word of God believe that anything is possible with God. When He said He created the world in six days or that He caused a global flood in about a year, we accept this, without fully understanding it, because an omnipotent God revealed it to us. However, as new knowledge is discovered in the physical world around us, we are coming to understand more fully how He may have done it. What a blessing for a believing scientist!