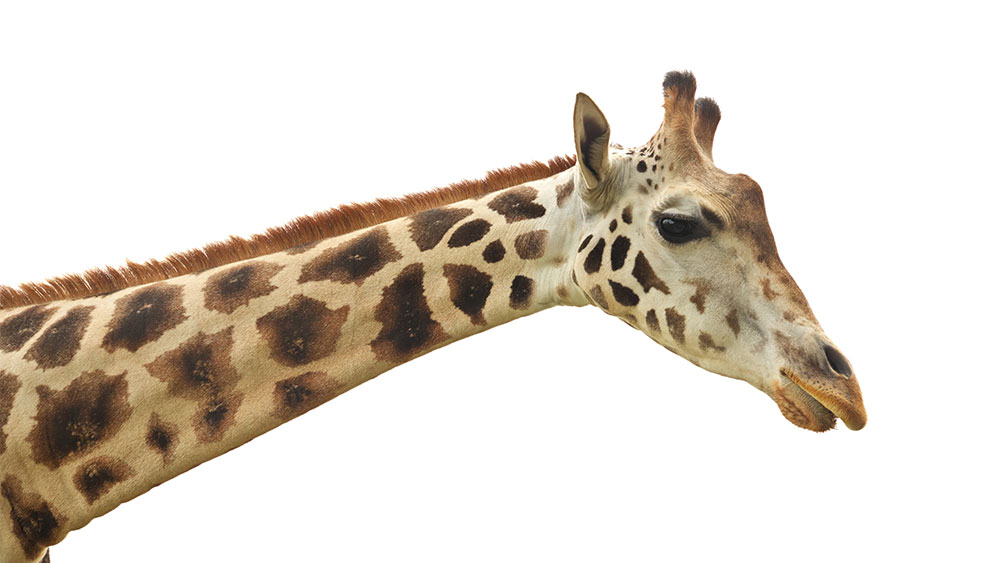 NEWS     CREATION SCIENCE UPDATE     GOD'S DESIGN IS AN ENGINEERING WONDER
Giraffe Neck Evolution?
BY FRANK SHERWIN, D.SC. (HON.) *  |
MONDAY, JUNE 13, 2022
“How the giraffe's long neck evolved has long been an evolutionary mystery” said a recent article.1 For many decades it was thought by evolutionists (i.e. Darwin) that the impetus for a slowly elongating neck of the giraffe was reaching for high foliage on the African plains. Now evolutionists believe it was courtship competition that was possibly “the driving force behind the evolution of long necks” with males confronting each other and swinging their two-to-three-meter-long necks in battle.


This research contributes to understanding how the giraffe's long neck evolved as well as to understanding the extensive integration of courtship struggles and feeding pressure. In fact, the neck size of male giraffes is directly related to social hierarchy, and courtship competition is the driving force behind the evolution of long necks.1

Evolutionists from the Institute of Vertebrate Paleontology and Paleoanthropology (IVPP) of the Chinese Academy of Sciences conducted their study on the activity of a bizarre early giraffoid called Discokeryx xiezhi that allegedly lived “17 million years ago.” “’A full skull and four cervical vertebrae were part of the find,” and it “featured many unique characteristics among mammals, including the development of a disc-like large ossicone [horn-like structure] in the middle of its head,’ said Prof. Deng Tao from IVPP. . .”1

It should be noted while giraffes of today and extinct Discokeryx xiezhi belong to the same superfamily (Giraffoidea), they are not evolutionary relatives due to their neck and skull morphologies differing greatly.

This is also true for the cervical anatomy of another extinct genus of Giraffidae called Samotherium major.


The exceptional occurrence of an almost complete neck of an intermediate giraffid allows for a comprehensive analysis of the anatomical features, and for comparisons to the short-necked okapi and long-necked giraffe. Samotherium major is not a direct ancestor of the giraffe or the okapi, however, it does share several common characteristics with the two extant taxa.2
Although remarkable, the morphological features of intermediate-necked giraffids, which play a significant role in the evolutionary transformation of the neck, remain largely unknown. While they are closely related, these species are not direct ancestors to the long-necked giraffe.2
The article has a cautionary tone and ends with a just-so story.
It is possible that, among giraffe ancestors during this period, mating males developed a way of attacking their competitors by swinging their necks and heads. This extreme struggle, supported by sexual selection, thus led to the rapid elongation of the giraffe's neck over a period of 2 million years to become the extant genus, Giraffa. [emphasis added].1
Non-evolutionists continue to wait for the unearthing of fossilized giraffe necks, that, over a course of “2 million years,” are progressively longer and would directly document short-to-long necks.
. . . Giraffa's marginal ecological niche may have promoted extreme intraspecific courtship competition, which in turn may have promoted extreme morphological evolution [i.e. macroevolution]. [emphasis added]1
Clearly “the cervical vertebrae of Discokeryx xiezhi are very stout and have the most complex joints between head and neck and between cervical vertebrae of any mammal”1 but this hardly solves the giraffe neck evolutionary mystery.
References
1. Staff Writer. Strange fossil solves giraffe evolutionary mystery. Phys.org. Posted on phys.org June 2, 2022, accessed June 4, 2022.
2. Danowitz, M. et al. 2015. The cervical anatomy of Samotherium, an intermediate-necked giraffid. Royal Society Open Science. 2(11).

*Dr. Sherwin is Research Scientist at the Institute for Creation Research. He earned an M.A. in zoology from the University of Northern Colorado and received an Honorary Doctorate of Science from Pensacola Christian College.