Giant clams living in the Pacific Ocean's shallow-water tropics display brilliant, iridescent colors. Other mollusks like squid and sea snails use specialized color-producing cells to communicate or camouflage—but clams don't talk or hide. Why do they display such radiance? Researchers uncovered five high-tech specifications that show how these giant clams use specialized iridescent cells to farm colonies of algae. 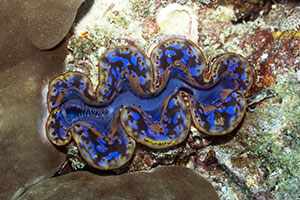 The clams have special cells called iridocytes directly exposed to the tropical sun. Beneath these grow microscopic towers of algae cells. The multi-functional iridocytes lessen the overpowering levels of sunlight (which would otherwise damage the algae), select just the wavelengths of light that the algae prefer, and actually direct those wavelengths toward the tiny algae towers. The giant clams' often brilliant appearance comes from the unwanted wavelengths that its iridocytes direct back out toward the sun.

Working together, the clam supplies algae with the right intensity and wavelength of light, along with protected living quarters, and the algae feed the giant clams by photosynthesis. 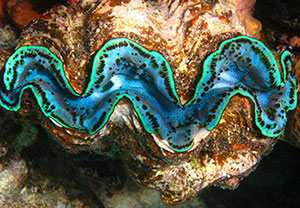 These amazing, living greenhouses need at least these five specifications in order for this phenomenal process to function properly, according to the technical description published in the Journal of the Royal Society Interface:

These researchers discerned that iridophores are at least as precisely designed as man-made transformers, but how do they explain these clever clam contraptions? They simply wrote that these structures are "highly evolved."2 Would it be more accurate to call them "skillfully crafted?"

These study authors made a great inference from one designed machine to another. But when it came to inferring that iridocyte light transformers were designed by Someone—just like electric transformers—these researchers clammed up.