Ancient Chinese pictographs are silent witnesses, like fingerprints, of historical events reported in Genesis. In particular, the details of these word-symbols are clues that point to how the earliest Chinese must have known basic facts of Genesis 1–11 at the very time their pictographs were invented.

Chinese is not an alphabet-based language—its word characters are both abbreviations of and combinations of picture symbols.1 The simplest symbols are combined to construct composite symbols that denote compound words.1,2 However, the actual pictures that were chosen, and especially their associated meanings, are what give us an amazing insight into Chinese history. The pictographic clues to that mysterious past have remained hidden in plain view for thousands of years.

Whereas most written languages construct words from the letters of an alphabet, the Chinese language uses radicals [i.e., root meaning-symbols], also called keys, roots or primitives, as the basic units and building blocks for the word characters. Each character contains one or more root symbols.3

But linguistic changes have occurred over the centuries, so pictographic analysis requires a forensic perspective, because the present is not the key to China’s linguistic past. The basic written vocabulary of the Chinese language is not being invented today, so the origin of their pictographs cannot be observed by empirical science methods.4 Rather, an investigative study of how the earliest Chinese historically selected relevant symbols to denote word meanings, during the invention of their written language, requires historical cause-and-effect analysis—what forensic scientists call “cause and origin” analysis.5 In this investigation, the forensic cause-and-origin question is: Where did the Chinese picture concepts come from—concepts that are memorialized in ancient Chinese pictographs? And a corollary question is: Why do these figures match Genesis history?

During the invention of a pictographic language, creating pictographic “words” involved selecting picture symbols that were relevant and meaningful to whoever invented those written symbols. But what motifs would signify meanings that the ancient Chinese would portray about 4,500 years ago? What ideas were familiar to those who invented China’s original written language?

Since Chinese civilization began soon after the Tower of Babel fiasco, the first Chinese settlers still had a fresh memory of mankind’s origins—from creation week to the dispersion of languages at Babel. Thus, they not only knew the history highlights in Genesis 1–11, but they would also have regarded those same events as important in human history and experience.6 It is unsurprising, therefore, that many of the picture-symbol characters, in the ancient Chinese language, match the thinking of a soon-after-Babel people who retained important memories of historic events reported in Genesis 1–11.

These creation-through-Babel events observed in Chinese pictographs include many themes and associations that readers of Genesis will recognize: God the Creator; creation of heaven and Earth, including a garden; man made from earth; man with stewardship responsibility; warning provided by God, hand, and a tree; man and woman as demonstrating completeness; covetousness involving trees and woman; temptation represented by garden, trees, and devil; death involves hands, tree, and mouths; thorns indicate weeds and punishment; alienation shown through man, woman, and garden; goodness involves woman and “seed”; sacrifice is represented by God, hand, and blood; “Lord” is designated by God and blood; “me” plus sheep equals righteousness; trust/dependence is represented by God covering a couple with clothing; violence is shown by an elder brother with a mark; flood involves universal water, and “universal” is conveyed by the number eight, united, and earth; boat is illustrated as a vessel or container and eight people; mankind plus one mouth/speech equals a type of unity, yet that unity combined with weeds (which depict the curse) equals ambition, and that ambition plus clay/bricks equals a tower; rebellion/confusion is represented by a tongue—and the list of correlations goes on. A few visual examples of this Genesis-relevant pattern follow, but note that there are many more documented in scholarly sources.1,2

The pictographic word for “to create” in ancient Chinese is composed of the components “to speak/talk” and “walking”—consistent with the Genesis account of God using His mouth to create and Adam being created fully mature and thus able to walk, as follows.

Kang and Nelson recognize that this etymology retains information from Genesis 2:7, since Adam (whose name means “ground” in Hebrew) was made from and received the breath of life from God, and was created fully formed, able to walk and talk, etc.7 Interestingly, the Chinese have a memory of a seven–day week, depicted pictographically as “the returning seventh day”—which is itself a monument to the creation week.

Recollection of the Garden of Eden is also evident in the ancient Chinese word for “garden.”6

If this does not link to the Genesis account, why else would the early Chinese combine the ideas of “two persons” who received the “breath” of life after the first one of those two persons (Adam) was made from the “dust” of the earth? 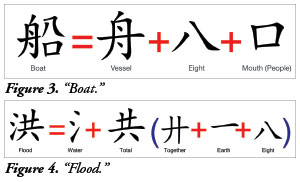 Additionally, the pictographic characters for “boat” and “flood” recall information recounted in the adventures of Noah and his Ark–borne family, as recorded in Genesis 6–9. These Chinese characters recall that there were exactly eight survivors of the worldwide Flood.7

Although the illustrations above only serve to introduce this fascinating trove of pictographic philology (word study), they do show what forensic professionals call a “beyond-genuine-dispute” witness of God’s historic workings in Chinese history, producing a form of providential history and evidence of biblical truth.

Before concluding this fascinating study a qualification is appropriate, because this writer is not an expert in ancient Chinese pictographs. Has this author ever seen the apologetics value of these Chinese pictographs tested in the real world? The answer is yes, as a previous Acts & Facts article indicated years ago.

Recalling that I learned somewhere that the Chinese character for “flood” somehow contained the symbol for “eight,” I asked my Chinese friend to write out the Chinese word for flood, and to describe what its component symbols represented. As indicated above, his description of flood included the number eight—a fact he had no explanation for, other than he guessed that it might have once been a phonetic symbol, similar to how “4” can be shorthand for “for” or “8” for “ate.”

Then I read 1 Peter 3:20 to him and pointed out how Genesis 6–10 reports that exactly eight humans survived the global Flood, a fact that perfectly made sense of the Chinese pictographs. Then, he added that the Chinese character for “boat” also contained the number eight, and he began to realize that his own language contained latent clues that the Bible’s early history was once well known to the Chinese people.

After further discussion about how the biblical God is a loving shepherd who seeks to secure wandering sheep into His heavenly sheepfold (Psalm 23; Luke 15; John 10), my friend concluded that, long ago, the Chinese people had known the truth about the God of the Bible, including the early history of God’s dealings with mankind as Genesis records, but that somehow this precious truth had been lost or wasted. During the wee hours of the morning, with joy in knowing that God had caringly revealed Himself to the Chinese people, my friend trusted Christ as his personal Savior, and he has enjoyed belonging to Him since (Luke 15:7; Romans 4:3; Luke 10:20).

The silent-yet-testifying witnesses of ancient Chinese pictographs, which remind us that the earliest Chinese generations knew much of what we read in Genesis, are a monument to God’s truth, preserved in simple pictographic symbols. That historically preserved truth points to the accuracy of the Scriptures, which in turn always point to and glorify the Lord Jesus Christ (John 5:39, 46).