NEWS     CREATION SCIENCE UPDATE     MAN WAS RECENTLY AND MIRACULOUSLY CREATED IN THE IMAGE OF GOD
Family Stories Told by Ancient DNA
BY CHANGE L. TAN *  |
THURSDAY, FEBRUARY 17, 2022
A group of scientists—including archaeologists from Newcastle University, UK, and geneticists from the University of the Basque Country, University of Vienna, and Harvard University1,2—unearthed a millennia-old family genealogy. They isolated and sequenced DNAs from postcranial, petrous, and teeth bones of 35 individuals buried in the stone cairn at Hazleton North (Gloucestershire, UK). This opens a new door to the hidden past.

Twenty-seven (21 males and 6 females) of the 35 were family members connected by blood, most of them genetic males descended from a single male and his four wives.2 This was a family of five generations, complete with an infant, toddlers, teenagers, and adults! The other eight were assumed to be non-family members because no genetic connection could be identified between them and the 27. Among these eight were a boy (aged 3-6 months), three women, and four men.

The stone cairn was excavated from 1979 to 1982.3 The bones of the 35 individuals were found in two opposed L-shaped chambered areas, flanked by rectangular cells of masonry on either side of the axial line. The whole cairn was enclosed by a retaining wall.2-3

Non-human bones were also uncovered on the site and nearby. Two red deer antlers were found in one of the dumps of rubble on which the cairn structure was built and were assumed to have been used to quarry stones (some of the stones were longer than a meter) for the construction of the cairn.4 In addition, a roe deer’s foreleg bones were found scattered in the lower fill of the south chambered area passage. Most elements of a perinatal sheep/goat skeleton were recovered from the primary fill of the south chamber. Grape seed, pig bones, and cattle bones were also unearthed in the area, and these were proposed to be pre-cairn (i.e., from before the cairn was constructed).

These ancient bones can reveal the genetic parent-child relationships but are unable to tell whether a parent died before, at, or after the death of his/her child. The human bones in the cairn were carbon-dated to around 3710-3615 BC.4 This would place the lifetime of those buried about 1200 years before Noah’s Flood. However, using the carbon-dating method to date ancient materials is problematic.5 Plus, these remains were buried in sediments that lie on top of the area’s Flood rocks, making it safest to interpret them as post-Flood remains.

It is worth pointing out that the bones were not neatly organized and intact.2 Though some bones were articulated, many were not. Most bones were fractured and intermingled. For example, the cranial of child SP4m (South Passage, individual 4, male) was fractured into 75 pieces. This child was identified as a member of the family though his parents were not in the 35 people whose DNAs were sequenced. The bones of the non-family member baby body NE3m (North Entrance, individual 3, male) were interspersed with the bones of NE1m whose bones were interspersed with those of NE2m. This suggests abnormal burial.

Nonetheless, the researchers of the Nature article concluded that these bones revealed the kinship practices at chambered tombs in Early Neolithic Britain.2 They further concluded that patrilineal descent was key in determining who was buried in the tomb because all 15 intergenerational transmissions were through men. They suggested that the eight non-family members were included in the tomb due to special social bonds. 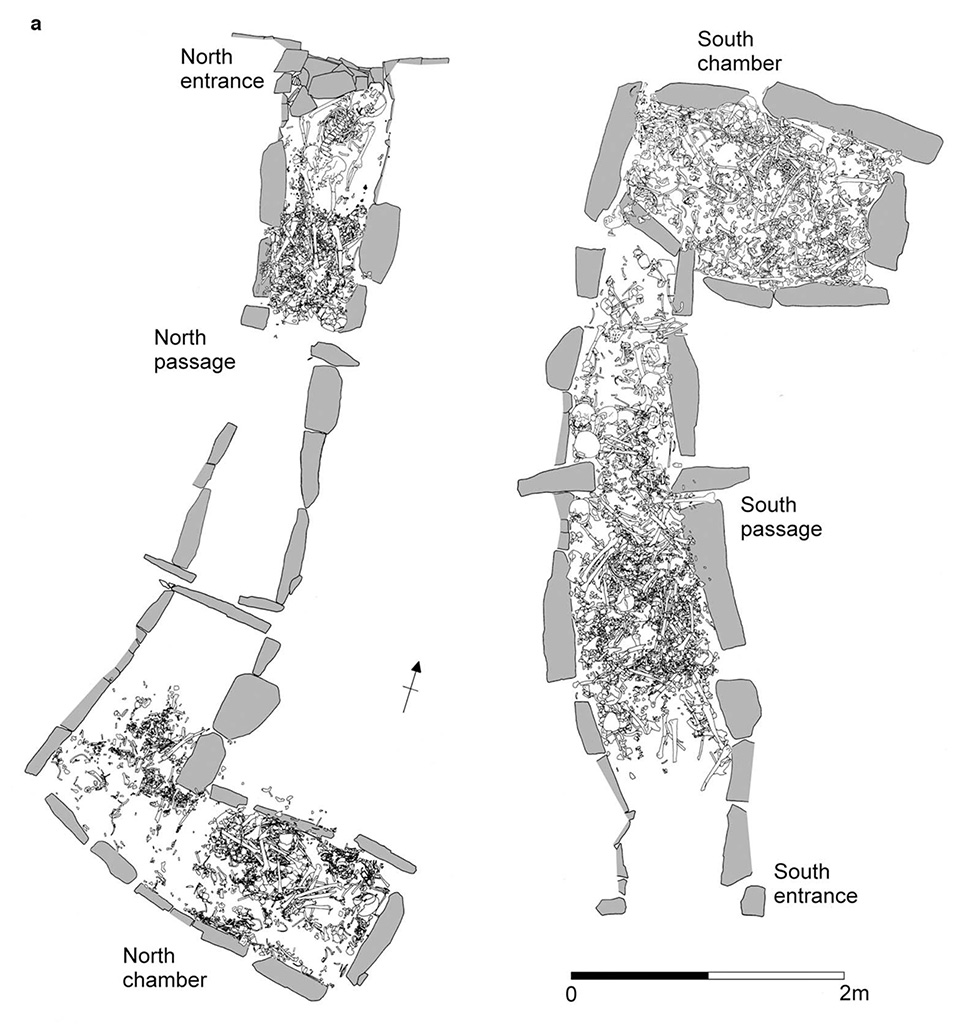 Distribution of human remains in both chambers.
Image credit: Nature magazine, 2021
However, many other possibilities exist, especially in the light of the less male-biased ratio of the eight non-family members (male/female ratio: 21 to 7 for family members and 5 to 3 for non-family members). Perhaps this family was one of those that tend to give birth to boys. Or maybe its female members outlived the duration of the usage of the tomb. Perhaps these people have been buried alive violently, or their bones were mixed violently after their death. Instead of being included in a family tomb because of special social bonds, the eight non-family members might be guests of the buried family. Who really knows?

Regardless of when and how these individuals lived and died, large-scale genome sequencing of ancient bones allows identification of lineage relationships of organisms. This could help solve mysteries surrounding the origins of humans and of animals.