Bird fossils do not generally ruffle paleontologist's feathers, but some amazing specimens from China's Jehol province—preserving eggs inside fossil bird bodies—might do just that. Researchers suggested that the bird egg features lend themselves to an evolutionary progression from crocodile-like reptile to chicken-like bird eggs. But if God made birds and reptiles according to separate kinds as clearly stated in Genesis, then they were and are unrelated. Which history does this recent evidence best match?

A team of mostly Chinese authors described the three extinct birds in the journal Nature.1 One of the birds had a long tail, and the team identified the other two as short-tailed birds called Enantiornithines. All three well-preserved fossils showed flattened remains of eggs situated just in front of the pelvis, like modern birds and reptiles. 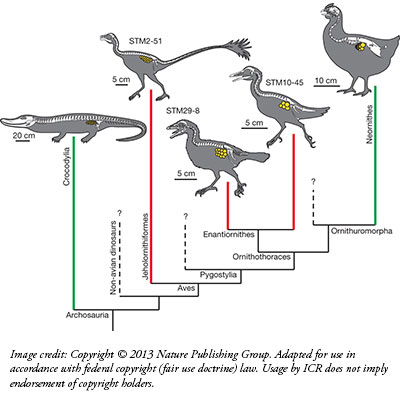 The crocodile shown on the left of the diagram held dozens of small eggs. The Nature study authors placed their long-tailed bird next to it and described it as "primitive." But if the long-tailed bird was more "primitive" than the short-tailed birds shown, then why were all three fossils found together in the same Chinese rocks? The primitive bird fossil should occur in rocks far below their supposed descendants.

The "primitive" bird had fewer eggs than the crocodile, but more than the Enantiornithines. The evolutionary diagram silhouetted a chicken on the far right as holding the fewest eggs. The viewer is supposed to get the impression that as reptiles evolved into birds, they produced fewer eggs.

But why select egg number as the key trait to define evolutionary relationships? Possibly because the study authors would have a difficult time depicting transitions in beaks or feathers, since reptiles don't even have feathers, and the dinosaurs that had beak-like mouth shapes were not the ones that allegedly evolved into birds. Clearly, the scientists hand-selected eggs to illustrate evolution, ignoring most of the anatomical data.

To support evolution, fossils should show a line-up of each trait evolving from nothing, but the best evolutionists can do is hand-select traits that God placed into creatures and force them onto an illustration. Where is the scientific evidence that eggs evolved from non-eggs?

In the process of trying to fit these new fossils into an evolutionary line-up, the Nature study authors encountered five features that clearly show the specimens to have been complete and created birds, thus outside of evolutionary flights of fancy.

The supposed evolution the Nature authors described rests squarely on "cherry-picking" the egg trait and ignoring the five more relevant bird traits noted in the very same report, in addition to other unmentioned traits. And their hand-picked differences in ancient bird egg numbers and sizes could merely reflect created variations in the way those specific birds produced eggs, or even differences in sexual maturity or mating seasons. Either explanation would crack this evolutionary story wide open.