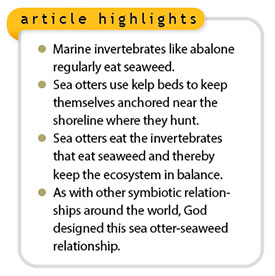 However, if these floating seaweeds were unanchored, nothing would prevent them from being washed far from coastlines out to sea—precluding them from fully filling the providential purposes that they serve in sublittoral tidewater habitats, such as ecologically partnering with sea otters, as noted below.3,4 So, for anchoring into rocky seabed substrates, God equipped them with holdfasts that connect via long, flexible, hose-like stipe stems to floating frond leaves. Fronds, like wrinkled elephant ears, have large surface areas, optimized for capturing sunlight to power photosynthesis.3

How do kelp help sea otters? Sea otters (Enhydra lutris) float in tidewaters while sleeping, so they harness themselves with kelp “seatbelts” to prevent themselves from floating out to sea too far from shore.4

Also, being carnivores, sea otters forage for sublittoral invertebrates—such as abalone snails, purple sea urchins, clams, crabs, and brittle stars—many of which are attracted to and dwell in underwater kelp forests.

[North Pacific] sea otters are voraciously hungry! Sea otters do not have blubber for insulation. To stay warm in below-freezing seawater (which stays liquid because of salinity), sea otters need warm fur and lots of food. They also have a high metabolism and eat about a quarter of their body weight every day!5

God designed kelp to help sea otters, who in turn help kelp. Even seaweeds glorify God, proving how He cares for His creation.