Some of the most eye-opening evidence you’ll find at the ICR Discovery Center for Science & Earth History is located in the Dragon Encounters exhibit. The word “dinosaur” didn’t come into use until 1842, when British scientist Richard Owen coined the term. What did humans call these “terrible reptiles” before then? You guessed it—dragons!

Our ancestors documented dragon sightings in different ways all over the world for millennia. Legends of dragon-like creatures have been found from the Americas to Europe, Asia, and the Middle East.

Genesis 9:2 tells us God instilled fear of humans into animals right after they left the Ark. This likely caused dinosaurs and other creatures to migrate all over the globe after the Flood. Sea levels dropped hundreds of feet during the Ice Age, exposing land bridges that provided passage from continent to continent. As people scattered across the earth, they would’ve encountered now-extinct creatures—like dinosaurs—that had already migrated to those places. This likely spurred the many dragon legends that persist today. People memorialized their encounters with these fearsome beasts in writings, art, and oral traditions that were passed down through time.

Here are just a few of the examples you’ll find in the Dragon Encounters exhibit. 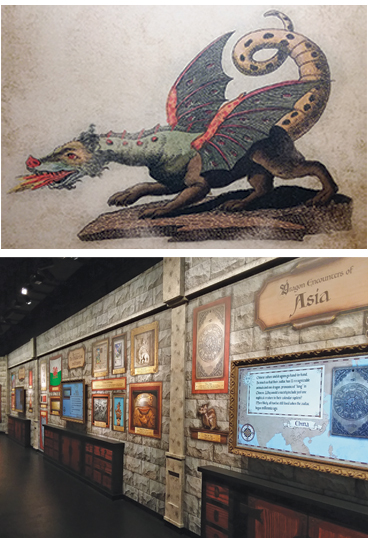 Dragon sightings were also reported by Alexander the Great (356–323 BC) and Marco Polo (1254–1324 AD). During his travels to the Far East, Polo recorded seeing huge “serpents” that had short legs, claws, and large jaws with sharp teeth.

The ancient historians Josephus (37–100 AD) and Herodotus (400s BC) mentioned winged serpents. And petroglyphs (carvings in stone) and pictographs (paintings on stone) created by native tribes in the Americas occasionally show creatures that resemble extinct reptiles.

The Dragon Encounters exhibit takes Discovery Center visitors on a compelling journey around the world and through time. Come learn the difference between ancient art that shows fictionalized giant monsters and art that shows exact fossil look-alikes. In the end, you’ll discover how dragon history confirms the Genesis historical accounts. Visit ICRdiscoverycenter.org to plan your visit today.