Dinosaur DNA Research: Is the tale wagging the evidence? | The Institute for Creation Research
Skip to main content

Dinosaurs are a popular topic of study, whether in the public imagination or in scientific research. The scientific community, however, has a dirty little secret regarding the manner in which that research is handled. If dinosaur DNA doesn't "look like chicken" (or a crocodile), it will most likely be discarded as "unreliable data" prior to publication--and thus be effectively censored from public access.

Why? Because evolutionary scientists are committed to only publish dinosaur DNA data that match their naturalistic tale of origins. Despite the amazing discoveries of soft tissue from dinosaur bones,1 dinosaur DNA research results (and other dinosaur "connective tissue" research) continue to be steered by evolutionary dogmatism.

An article published in Science in 1993 illustrates how and why dinosaur bone research has been chillingly censored. "Dino DNA: The Hunt and the Hype" by Virginia Morell stated that "several groups are racing to get the first DNA out of dinosaur bones, but other researchers say their efforts are taking attention away from the real scientific value of ancient DNA."

Mary Schweitzer, a biology graduate student at Montana State University's Museum of the Rockies, was examining a thin section of Tyrranosaurus rex bone…when she noticed a series of peculiar structures. Round and tiny and nucleated, they were threaded through the bone like red blood cells in blood vessels. But blood cells in a dinosaur bone should have disappeared eons ago. "I got goose bumps," recalls Schweitzer. "It was exactly like looking at a slice of modern bone. But, of course, I couldn't believe it. I said to the lab technician: 'The bones, after all, are 65 million years old. How could blood cells survive that long?'"2

Why was Schweitzer, an eyewitness who microscopically observed the insides of a T. rex bone, afraid to believe her own eyes? Isn't empirical science all about observation? Furthermore, Morell reported, "Schweitzer has already extracted a molecule that might be dinosaur DNA."

However, connective tissue ruins and degrades over time, such that DNA should not survive at all, even if the creature only lived 50,000 years ago.3 The existence of 65 million-year-old DNA is biochemically unthinkable. In other words, the old-earth evolutionary tale is clearly at odds with the fresh dinosaur bone evidence. How embarrassing to the academic establishment! This may be why ongoing dinosaur soft tissue discoveries are generally not broadcast through popular media channels.

Evolutionary "damage control" is observed in the form of "chilling" (i.e., coerced) censorship of research, with severe consequences to those who "buck the system." Consider the research flow chart pictured below describing the process of extracting dinosaur DNA. Note steps 7 and especially 8. Why must the research results be dismissed if the DNA extract doesn't look like birds or crocodiles? The answer is evolutionary gatekeeping:

To make sure she's liberated the right molecule, Schweitzer compares the extracted DNA sequences with those of hundreds of living organisms. If the sequence turns out to be similar to that of a known fungal gene, for example, she knows the sample has been contaminated.

That's how DNA hunters know they've gone wrong. But how do they know when they're on the right track, given that there are no living dinosaurs to provide a handy sample of DNA for comparison? The answer is that they rely on paleontological theory, which (according to most researchers) holds that dinosaurs and crocodiles came from the same stock, and that the dinosaurs' only living descendants are birds. Therefore researchers look for DNA that is similar, but not identical, to DNA from these groups of organisms.4

In other words, only DNA research that provides dinosaur DNA sequences similar to those of birds and crocodiles is allowed. As the flowchart indicates, all other results are deemed anomalies that should be rejected as though they were known contaminants, like fungal genes. This approach is not observation-directed empirical research; this is assumption-driven, theory-dictated censorship--"science" falsely so-called.5 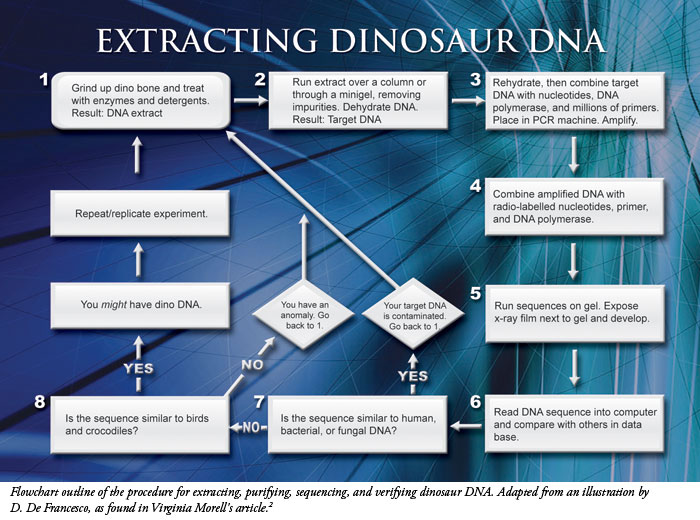 This purposeful pattern of coerced concealment of the nonconforming DNA data from unfossilized dinosaur bones (labeled "an anomaly" on the chart) involves what courtroom lawyers and judges call "chilling" coercion and "spoliation of evidence"--inducing the concealment (and eventual destruction) of embarrassing information in order to prevent one's opponent from using it at trial.

Whenever any kind of evidence is concealed, one immediately questions the spoliators' motives for doing so. The intuitive answer is that they dislike what the information would reveal. Therefore, to spoliate evidence suggests that the spoliators' argument or theory would be weakened, or embarrassed, by that evidence. This suggestion is so strong, forensically speaking, that it is treated as a rule of presumptive inference in law courts. In other words, if someone hides evidence in this way, the law presumes that the hidden evidence was damaging to the argument of the spoliator. The spoliator then bears the burden of proof to show otherwise.6

This shows that the civil law courts understand the importance of evidence spoliation--it points to a willingness to conceal or otherwise suppress truth in order to advance a specific cause. The name Arthur Andersen comes to mind, as this accounting firm's shredding of Enron documents hindered SEC investigators.8

In suppressed dinosaur DNA research--which is a subset of the irrefutable, but hushed, dinosaur soft tissue discoveries--the same issue of evidence spoliation is relevant. Why? Because today's dinosaur DNA controversy in particular, and today's dinosaur "connective tissue" controversy in general, directly puts at issue the real age of the dinosaurs: Did they live millions of years ago, or in much more recent history on an earth inhabited by humans--descendants of Adam and Eve?9

How will anyone really know what dinosaur DNA sequences look like until uncensored data from dinosaur bones are published for public scrutiny? And how will such data be published at all if "embarrassing" research results are routinely discarded as anomalous, simply because they didn't "look like chicken"? One way to acquire more reliable data in this case would be to repeat the DNA research across multiple labs, until consistent results emerge.

In fact, a similar approach was taken in 1994. The winners of the race to sequence dinosaur DNA were Scott Woodward and his colleagues, who published their results in Science.10 They extracted DNA from a purportedly well-preserved dinosaur bone. However, they were not rewarded for their victory. The sequence they discovered was not like birds or reptiles, but seemed unique.

These researchers decided not to follow the procedure outlined in the 1993 flowchart, which would have "told" them that what they found was an unacceptable "anomaly." Since this 1994 DNA did not fit the evolutionary interpretive filter, the authors were raked over the academic coals. Moreover, the objections to their results were not based on conflicting research results, but appeared in editorials and reviews. As a result of the uproar from the scientific community, their dinosaur DNA sequence never became a permanent entry in any public database. In fact, since this very public academic flogging, no scientist has attempted to publish any dinosaur DNA research (resulting in "chilled" academic speech).

Interestingly, Schweitzer has never published any of her purported DNA research on dinosaur tissue, although she has published on tissue analyses and, recently, data on protein sequence. While the tissue analyses reported over the past decade are nearly impossible to dispute, this recently published dinosaur protein sequence from a T. rex came under extreme criticism and the data were highly questioned by peers as having been manipulated to produce close similarities with chicken and ostrich protein.11 Was this done as per the "paleontological theory and protocol" described in 1993?

The gatekeeping approach to ancient DNA research established as a protocol in 1993 is a product of dogmatic evolutionary theory. The 1994 results put the dogma to the test, with the result that:

The coerced suppression of the results by the evolutionary scientific community has dissuaded anyone else from publishing dinosaur DNA research that is not in line with evolutionary dictates. Such self-censorship "chills" empirical research, which prevents the public reporting of observable DNA sequences in order to insulate the larger story of particles-to-people evolution from cross-examination.

Where are the real scientists in dinosaur DNA research who refuse to kowtow to evolution's gatekeepers?

* Dr. Johnson is Special Counsel at ICR. Dr. Tomkins, ICR Research Associate, worked in academic research in genetics and genomics for 18+ years, 12 involving research in cloning and sequencing DNA from a wide variety of plants, animals and microbes. Mr. Thomas is Science Writer at the Institute for Creation Research.