Have you ever wondered where all of Earth’s chemical elements came from? There is such a diversity of elements in the crust—ranging from the hydrogen atom with a single proton orbited by an electron to the uranium atom with 92 protons orbited by 92 electrons—that it is a formidable task for science to explain where they originated and how they came to be located in our solar system.

The traditional model holds that the light elements (those with 28 protons or less) are produced by fusion reactions within stars such as our sun. Indeed, observations of the sun’s photosphere and chromosphere confirm the existence of oxygen, carbon, magnesium, calcium, silicon, and iron. Recent measurements of the neutrino flux from the sun also seem to confirm that hydrogen fusion is the primary mechanism for generating the sun’s energy deep within its interior.1

However, nuclear fusion reactions are only exothermic (producing heat) up to the 56Fe to 62Ni element range. Beyond that, the fusion reactions thought to produce the heavier elements become endothermic (the surrounding material must supply energy for the reaction to occur). This has led mainstream science to accept models that predict heavier elements (>62Ni) are produced during the explosions of supernovas.

Earth’s elements were created by God on the second day before any stars came into existence.

But can supernova remnants explain the abundance of heavy elements like Pb and U in our solar system? This is an important question since all radiometric dating methods, with the exception of the 14C, K-Ar, and Ar-Ar methods, depend on elements with questionable origins.

Because of their vast distance from Earth, only supernovas’ atmosphere/ejecta can be observed, and they basically show extremely small amounts of the heavy elements barium,2 mercury,3,4 and technetium.5 This isn’t surprising since one might expect heavy elements produced in a stellar core to stay in that core and not be directly observable or widely dispersed. 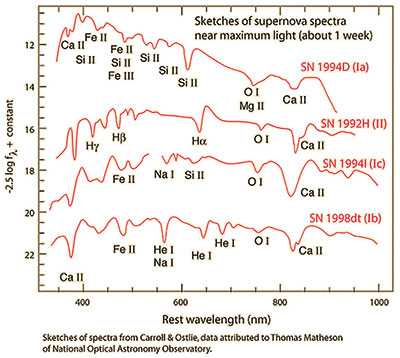 Our solar system has virtually all of the heavy elements present, so where is the supernova remnant that supposedly generated these elements? This question was posed to a University of Arizona graduate student, and he gave the generally accepted secular view that our galaxy was seeded by a supernova (or perhaps several), and then our solar system formed from a nebula 4.5 to 5 billion years ago.6 This view, of course, assumes the deep-time paradigm for the evolution of the universe.

It’s interesting to note that short half-life (105 to 106 years) radioisotopes such as 26Al and several of the Tc isotopes have been observed in the residue from supernova.7-9 The eminent astrophysicist Donald D. Clayton remarked that “one of the most fascinating problems in stellar evolution and nucleosynthesis is that of separating abundance abnormalities into those contained in the star at birth and those produced by the star during its own lifetime.”10 In other words, Dr. Clayton is stating the obvious conundrum that secular scientists really don’t know if the heavy elements were in the universe from its beginning or were produced over long time periods in stellar interiors.

The deep-time paradigm of heavy element creation is a matter of belief, not fact.

The biblical narrative provides us with a different paradigm for the origin of the elements. According to the Bible, all matter/energy was created on the first day of creation, the earth on the second, and stars on the fourth. It’s clear in this narrative that Earth’s elements were created by God on the second day before any stars came into existence.

Since there is no definitive evidence that any of the elements with more protons than 62Ni were formed in the interiors of supernovas, the deep-time paradigm of heavy element creation is a matter of belief, not fact.