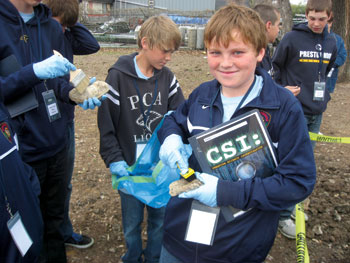 Think back for a minute to when you were a middle school student. What subjects were you interested in? English, math, history? Science, perhaps? What if you had been given the opportunity to study scientific evidence from a crime scene investigation (CSI) methodology perspective? Would it have made you more interested in science?

That’s exactly what occurred at the Dallas headquarters of the Institute for Creation Research this past March. Thirty-six seventh and eighth-grade students from Prestonwood Christian Academy in Plano, Texas, took a CSI—Creation Science Investigation—course from ICR scientists. The course was developed after ICR was approached by local Christian schools to develop a creation science “minimester” for students to attend during spring break. What resulted was a three to four-day intensive, hands-on approach for students to explore the evidence of science from a creationist perspective. 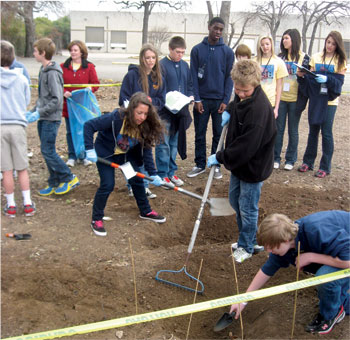 The purpose of CSI was to provide relevant experiences that reinforced the observation that while science explores evidence, one’s worldview largely interprets that evidence. Through information-gathering activities, students were taught three major concepts:

ICR Science Writer Brian Thomas, who was directly involved in the planning and teaching of the course, commented:

Our purpose during CSI was to equip young students with lifelong thinking skills that would enable them to properly discern between two different scientific approaches: operational science and historical science. We had the students practice each kind of science so they would know firsthand that operational science cannot directly obtain information about the past, and that the best way to learn history is to consult eyewitness accounts just like those found in Scripture.

Armed with their CSI field guide, trowels, shovels, measuring tapes, paintbrushes, gloves, and other instruments, the students were introduced to the evidence-gathering process by participating in a bone dig on ICR property. Students plotted the dig site, dug through dirt and rocks, found and extracted their evidence (bones and ammonites), and brought it back to the lab for identification and exploration. Mr. Thomas and ICR zoologist Frank Sherwin led the students through the process of extracting bone marrow from their identified bones. The process of answering the question “When was the bone deposited?” guided the students to see how one’s worldview largely interprets the evidence.

On the second day, students were treated to a discussion by ICR President Dr. John Morris on dinosaurs and the Bible, during which he answered such questions as “Are dinosaurs really found in the Bible?,” “Did dinosaurs go on the Ark?,” and “Did dinosaurs live with people?” The afternoon brought students a Question and Answer session with Harvard graduates Dr. Randy Guliuzza and Dr. Nathaniel Jeanson, as well as Mr. Thomas and Mr. Sherwin. Dr. Jeanson then summed up the students’ two-day experiences at ICR, while “helping them practice applying the Scripture to basic science problems dealing with origins, such as the origin of marsupials.”

The following day, Brian Thomas accompanied the students to Glen Rose for a private tour of the fossils found in Paluxy River on the McFall Property. Many students cited this as a highlight of the week and enjoyed being able to take the information they had learned on the ICR campus and apply it to the dinosaur tracks and fossils in real life.

Frank Sherwin summarized the experience this way: “It was an honor to share with and instruct the students in biblically based creation science that honors the Creator and not the creation.” ICR was pleased to be able to forge this relationship with this local Christian school, and we look forward to new relationships in the future.

* Dr. Forlow is Education Specialist at the Institute for Creation Research.

Why Use Words?
Conservative Christians speak of inerrancy and inspiration, while liberal theologians prefer dynamic equivalence. But what does Jesus teach? How...
BY: HENRY M. MORRIS III, D.MIN.

Created by Christ
"And to make all men see what is the fellowship of the mystery, which from the beginning of the world hath been hid in God, who created all things...
BY: HENRY M. MORRIS, PH.D.

The 'Two' Books of Isaiah
"Comfort ye, comfort ye my people, saith your God. Speak ye comfortable to Jerusalem, and cry unto her, that her warfare is accomplished, that her...
BY: HENRY M. MORRIS, PH.D.
More Days of Praise