NASA astronaut Col. Jeffrey Williams recently visited the Institute for Creation Research, and we had the opportunity to talk with him about his life, work, and faith. In our feature this month, we share excerpts from the interview (pages 5-7). Col. Williams talked about his time in space, his love of family, and his relationship with God. I was especially touched by a story he told about God hearing him on a “down day.” On that particular day, he witnessed something that no one else on Earth saw at that moment. He was moved by the way God revealed His wonders of creation, and he even had fun with the experience. 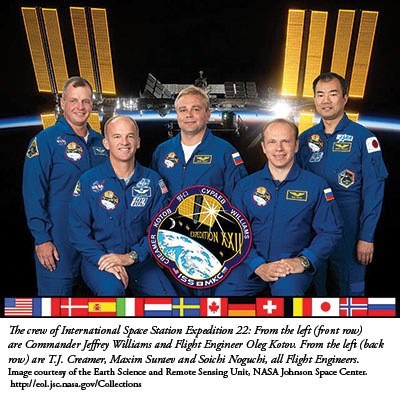 In the full interview, Col. Williams said he continually sees the providence of God in the details of life. He shared some of his testimony—how he grew up on a dairy farm and later became a military test pilot. He went to West Point and served in the Army for over 27 years. Over a period of ten years he persistently applied to NASA, and eventually became an astronaut. He also shared how a family crisis brought him to faith in Christ and how a specific prayer by his wife was answered as he floated in space.

Col. Williams enjoys photography—he’s taken about 200,000 photos from the International Space Station (ISS), and many can be found on NASA’s website. He said the astronauts were continually drawn to the image of Earth outside their station window…that Earth was their constant focal point. Some of the NASA photographs included with our feature and on the cover of this issue were taken by Col. Williams.

Clips from the interview can be seen on our website, ICR.org, and clips will occasionally appear on our social media sites. You can find us on Facebook (Institute for Creation Research) and on Twitter (@ICRscience).

Other articles in this issue also highlight the providence of God. Dr. James Johnson’s article “Genesis in Chinese Pictographs” explains how God providentially used the ancient Chinese language itself to witness to a questioning student (pages 18-20). In “Evolution of a Creation Scientist,” Dr. Jeff Tomkins describes how through a bizarre series of events God placed a Christian roommate in his path at the right time (page 21). And Dr. Vernon Cupps tells of his journey in becoming a young-earth creationist in his mid-50s (page 10).

Col. Williams reminded me how much the Creator of the universe loves us and wants to be involved in our lives. He said, “Look for the little things, the providence of God—He orchestrates the details of our lives.” Our heavenly Father wants to daily interact with us and reveal Himself to us in creative ways. And whether we’re floating in space and looking through an ISS window at the planet that He created as our home, or whether we have our feet firmly planted on this earth, He delights in unveiling His wonders to His children, even on the down days.

The Incredible Canine Sniffer
As any dog owner will tell you, the smelling ability of Rover is incredible.1 Surprisingly, however, “little is known about the structure...
BY: FRANK SHERWIN, D.SC. (HON.)
The Latest
NEWS   ACTS & FACTS   PODCASTS