ICR was very pleased to host the fifth annual Creation Research Society (CRS) conference this year July 31–August 1 in Dallas. Many attendees arrived early for a reception at ICR the evening before the conference began. It was a great time of fellowship with fellow scientists and others who hold the Word of God in high esteem. I always enjoy seeing old friends and making new ones. 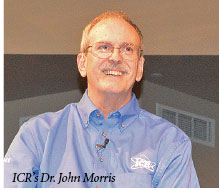 The CRS conference was a great opportunity for creation scientists to come together to present and discuss the latest research on the issue of origins. Topics of discussion included astronomy, geology, biology, and others. Several new models were presented, and some old models were challenged. It’s always exciting to see the latest research results in various disciplines.

Dr. Kevin Anderson opened the conference with a fascinating presentation summarizing the many discoveries of soft tissue in dinosaur remains. He also covered the more popular “rescuing devices” that evolutionists use to attempt to save their belief in deep time from the overwhelming evidence to the contrary. Can soft tissue be preserved by iron extracted from hemoglobin? The science just doesn’t support that conclusion. The decay rates of collagen and DNA have been studied and simply do not agree with the belief that dinosaurs died millions of years ago. For details, see the recent iDINO issue of the Creation Research Society Quarterly (volume 51, number 4, spring 2015, available at CRSbooks.org).

A number of ICR researchers presented their latest findings. To select just two from many, Dr. Tim Clarey presented some of his preliminary results on megasequences—extensive sedimentary rock units that suggest the stages in which the global Flood occurred. And Dr. Jeff Tomkins presented his research comparing the human genome with the chimpanzee genome. Most people don’t realize the extent of the evolutionary assumptions that have gone into constructing the chimp genome. Secular scientists have used the human genome as a guide to assemble chimpanzee DNA sequences based on the assumption of common ancestry. Dr. Tomkins is performing a de novo assembly of the chimpanzee genome and is researching more objective algorithms and methods by which human and ape genomes may be compared.

I was intrigued by some of the information brought forth in my own field of astronomy. Wayne Spencer discussed the Rossiter-McLaughlin effect, by which the orientation of transiting extra-solar planets can be estimated. He showed that a substantial fraction of the planets so far discovered have an orbital plane that is highly tilted relative to their star’s rotation axis. Some even orbit “backward”—in the opposite direction that their star spins. This information is starkly contrary to secular expectations. The secular model has planets and stars forming from a collapsing nebular disk—in which case the star and all its planets should rotate and revolve in the same plane.

Also, as Dr. Bob Hill showed, the New Horizons mission found compelling evidence of geological activity on Pluto. This was certainly surprising for the secularists who expected to find a cold, frozen, dead world scarred by countless craters accumulated over billions of years. Instead, they found few craters, large mountains comparable to the earth’s Rocky Mountains, and an enormous heart-shaped plane laid out in a quasi-polygonal pattern. This would seem to indicate lots of geological activity driven by internal heat. This confirms the biblical timescale because Pluto is far too small to retain heat over billions of years. Pluto’s largest moon, Charon, also has rugged surface features—ridges and chasms—suggesting recent geological activity.

What an exciting time to be a creationist! If you are interested in these kinds of issues, consider becoming a member of the Creation Research Society. Check out their website at
CreationResearch.org.

How Algae Do Fine When Tossed at Sea
How would you do if someone spun you around every few seconds all day long? Marine algae repeatedly get tossed about in coastal surf, and they cope quite...
BY: BRIAN THOMAS, PH.D.
More Creation Science Update

Radio Interview: God Made Gorillas, God Made You
ICR Editor Christy Hardy talks with WBGL in Illinois about getting equipped to discuss creation/evolution issues with your kids and reveals the...
BY: STAFF WRITER
The Latest
NEWS   ACTS & FACTS   PODCASTS