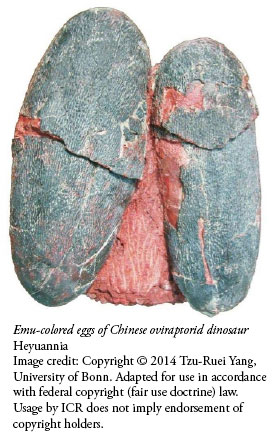 The eggs came from three different upper Cretaceous sites, and their dark color contrasted with the sediment that encased them. Curious about the color, the German team from the University of Bonn conducted chemical separation techniques to isolate original dinosaur egg pigments—the first discovery of its kind.1 Though the eggs have likely lost some of their pattern detail, the presence of specific pigments named protoporphyrin and biliverdin within the ancient shells confirmed they were probably a dark blue-green color.

These pigment molecules are somewhat complicated, though not as intricately organized as proteins or DNA. The dinosaur eggshell pigments contain five-sided chemical ring structures all bonded together. The pigments do not easily dissolve in water, which certainly helps account for them persisting for at least thousands of years, but their carbon and nitrogen-containing chemical rings include plenty of double-bonds. These bonds certainly can’t last forever. They hold stored chemical energy, fertile ground for the relentless chemical reactions that always break down these kinds of molecules. 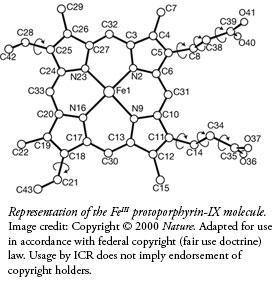 By their nature, complicated chemical rings and double bonds tend to break apart into smaller, simpler molecules. So how could they stay intact for hundreds of thousands of years, let alone a million or more?

Back in 2013, ICR presented similar evidence from the journal Geology where an article showcased pigments from marine organisms supposedly 340 million years old.2 An expert critiqued our article, counter-asserting that pigments like these should last millions of years because fossilization somehow “locked” the pigments behind mineralized walls, preserving them indefinitely. This assertion ignored the most significant factor involved.3

How could these tiny mineral walls stay intact through millions of years of earthquakes, floods, volcanic eruptions, climate changes, erosion, and asteroid impacts—catastrophes that evolutionists regularly describe occurring everywhere in the past? And if the pigments were locked behind mineral walls, why do they still appear visible? Even if the encasing minerals had the miraculous strength to resist cracking and exposing the pigments to outside chemicals—as unscientific an assertion as is possible—they still would not prevent complex biological molecules like pigments, with double bonds and complicated ring structures, from falling apart on their own.

In other words, even if we imagine the impossible scenario of biomolecules remaining hermetically sealed from all possible influences like microbes, oxygen and water for millions of years, the molecule itself—without the help of some science-defying miracles—would have to obey the most universally applied law in all the universe: the second law of thermodynamics. Also known as the Law of Entropy, the second law describes how all highly organized systems spontaneously disorganize over time. Entropy is incessant, and it works even when things are buried or frozen. No known process violates this law, especially the process of chemical reactions that relieve tension from double-bonds, reducing complicated chemicals to simple ones.

Scientists have not measured pigment decay rates, but they have measured how fast other biochemicals spontaneously degrade. Experimental results limit their age expectation to less than one million years. Until an experiment reveals that pigment decay rates magically buck this trend, the most scientific conclusion about dinosaur eggshell pigments must hold to the Law of Entropy, consistent with the burial of dinosaurs—and their eggs—in Noah’s Flood only thousands of years ago.

Image credit: Steve Starer. Adapted for use in accordance with federal copyright (fair use doctrine) law. Usage by ICR does not imply endorsement of copyright holders.