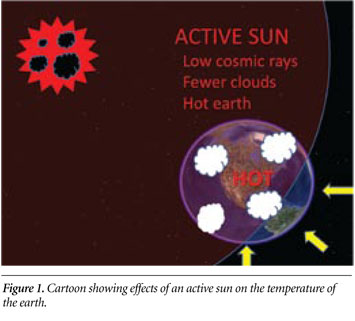 In several Acts & Facts articles over the past few years, I have addressed Henrik Svensmark’s theory that modulated galactic cosmic radiation (GCR) from outer space may be one of the primary driving mechanisms for global warming.1-5 Industrialization may have contributed slightly to global warming, but natural mechanisms involving the sun are probably more important. Svensmark has presented evidence that when the sun is active (more solar flares, a strong solar wind, and more sunspots), its electromagnetic field envelopes the earth and shields it from GCR, producing low cosmic radiation, fewer clouds and a hot earth (see Figure 1).

Svensmark has also demonstrated that when the sun is inactive (fewer solar flares, a weak solar wind, and fewer sunspots), the earth is exposed to more GCR, which produces high 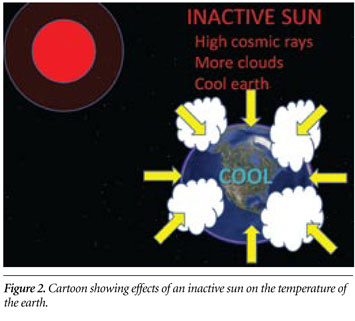 However, at least one key ingredient in Svensmark’s theory has prevented its wholesale adoption—the evidence that more cosmic radiation entering the earth’s atmosphere causes more nucleation of cloud droplets and the formation of more clouds that increase the albedo of the earth (the percentage of solar energy the earth reflects). If it can be shown that cosmic radiation increases the concentration of cloud droplets that lead to more clouds, the theory will be well on its way to being confirmed. 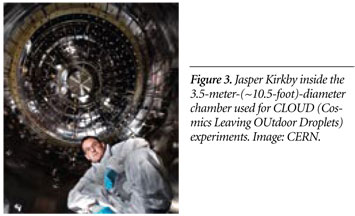 Jasper Kirkby at CERN (European Organization for Nuclear Research) in Geneva, Switzerland, took on the task of conducting experiments on the enhanced nucleation of cloud particles in a large cloud chamber that could be irradiated with a well-controlled beam of high-energy protons (see Figure 3). The beam of protons simulates galactic cosmic rays that nucleate cloud particles that continue to grow and form cloud droplets. Kirkby provided a video description of the chamber and the planned experiments at a lecture in Vancouver, Canada, on March 23, 2011.6

The chamber was fully installed and the first results obtained during 2010. Kirkby and his co-workers reported their results in a recent paper in Nature.7 The report provided data on nucleation rate versus sulfuric acid concentration, ammonia mixing ratio, negative ion concentration, and cluster composition for various temperatures. For example, Figure 4 shows the nucleation rate for cloud particles 1.7 nm (6.7 x 10-8 inch) in diameter versus sulfuric acid concentration at three temperatures—292K (33.9oF), 278K (8.7oF), and 248K (-45.3oF)—at 38 percent relative humidity and with trace amounts of ammonia. 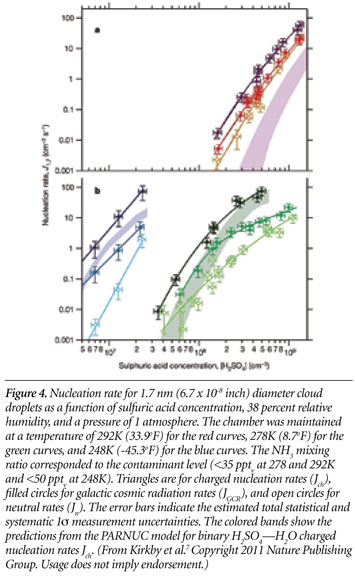 The primary result was that ground-level galactic cosmic radiation increases the nucleation rate of cloud particles containing sulfuric acid and ammonia between twofold and tenfold or more. Note the difference in nucleation rates between Jgcr (filled circles) and Jn (open circles) at each temperature in Figure 4. This enhancement of nucleation occurs for all temperatures and cluster compositions observed so far. The fraction of these freshly nucleated particles that grow to sufficient sizes to produce cloud droplets, as well as the role of organic vapors in the nucleation and growth process, still remains an open question experimentally. However, these are promising results for the potential linkage between galactic cosmic rays and clouds.

Climate scientists have misinterpreted earth history by rejecting the biblical revelation of a global flood only a few thousand years ago that provides an explanation for the Ice Age and past climate change. Instead, they believe the Ice Age was caused by minor fluctuations in solar heating over millions of years. Consequently, they believe a minor change in global heating introduced by even small amounts of gases or particulates in the atmosphere could cause the earth to reach a “tipping point” and lead to a “runaway greenhouse” or to enter another ice age.

From a creationist perspective, if the Ice Age was a consequence of the catastrophic processes of the Genesis Flood, then earth’s climate system would not be sensitive to minor influences. The climate appears to be a highly stable system and exhibits oscillations around an equilibrium level rather than being susceptible to transitions to new states. The earth-sun system does oscillate over short periods of time, as evidenced by minor heating and cooling and by the variation in the number of sunspots. But, these fluctuations do not destabilize the climate. So, the introduction of minor changes in gases or particulates in the atmosphere should not cause major changes but rather minor departures from an equilibrium state.

The primary cause of the conflict in the global warming debate is not the observation that carbon dioxide has increased in the atmosphere or that a small amount of warming has occurred, but that the Bible has been rejected as a source of important revelation about earth history. Scripture assures us that “while the earth remaineth, seedtime and harvest, and cold and heat, and summer and winter, and day and night shall not cease” (Genesis 8:22).