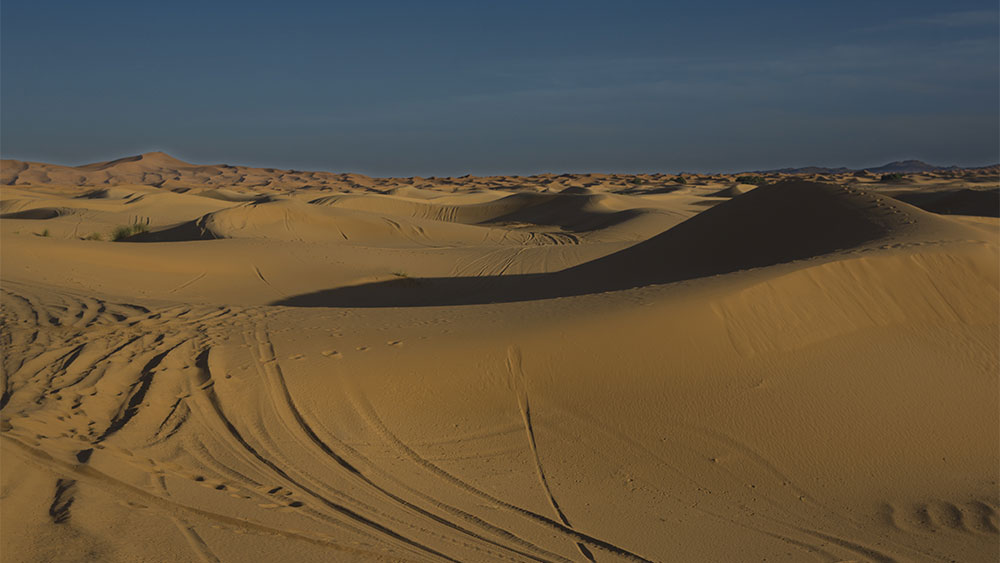 NEWS     CREATION SCIENCE UPDATE
Claims of 'Freshwater' Plesiosaurs Drowned by the Flood
BY TIM CLAREY, PH.D. *  |
MONDAY, AUGUST 15, 2022
A new discovery in Morocco’s Saharan Desert has evolutionary scientists making claims that plesiosaurs lived in freshwater too.1 Usually thought of as marine reptiles, plesiosaurs have been found on nearly every continent. Most are found within rock layers containing other marine organisms, but these were found in rocks with dinosaurs. Could the global Flood provide a better explanation?

Scientists from the University of Bath (UK), University of Portsmouth (UK), and the Université Hassan II in Morocco found bones of several small plesiosaurs scattered within the sandy beds of the Kem Kem Formation, a unit deposited as the Genesis Flood was nearing its peak.2 This same layer also contains spinosaur dinosaurs, frogs, crocodiles, turtles, and coelacanth fish, making for a rather odd collection.3

Dr. Nick Longrich of the University of Bath and one of the co-authors added:


It's scrappy stuff, but isolated bones actually tell us a lot about ancient ecosystems and animals in them. They're so much more common than skeletons, they give you more information to work with. The bones and teeth were found scattered and in different localities, not as a skeleton. So each bone and each tooth is a different animal. We have over a dozen animals in this collection.3

Because the bones were found with dinosaurs, the evolutionary scientists claim that these plesiosaurs must have swum up freshwater rivers, similar to freshwater dolphins today.

"We don't really know why the plesiosaurs are in freshwater, added Longrich. "It's a bit controversial, but who's to say that because we paleontologists have always called them 'marine reptiles,' they had to live in the sea? Lots of marine lineages invaded freshwater."3

Could the presence of other marine fish, like coelacanths, in the same layers be a hint? Why do we see a mixing of apparently different environments and only scattered bones of these plesiosaurs?


We don't really know, honestly. That's how paleontology works. People ask, how can [evolutionary] paleontologists know anything for certain about the lives of animals that went extinct millions of years ago? The reality is, we can't always. All we can do is make educated guesses based on the information we have. We'll find more fossils. Maybe they'll confirm those guesses. Maybe not. It's been really interesting to see the direction this project has gone in.3

At ICR we have a better explanation. Marine animals and non-marine animals are routinely found mixed together all over the globe by the Genesis Flood.4-7 Coelacanth fish were found previously in this very same Kem Kem Formation with Spinosaurus bones, leaving the conventional scientists flabbergasted. They resorted to unsubstantiated claims that coelacanths lived as freshwater fish in the past.5

Today’s coelacanths live about 500 feet below the ocean surface and not in freshwater rivers as evolutionary paleontologists have proposed. They dismiss the evidence from living specimens and insist that ancient coelacanths must have lived in freshwater simply because they are found in strata with dinosaurs. And now they are doing the same with these plesiosaur bones. Making similar baseless claims that plesiosaurs could live in freshwater too.

The research team was further amazed by the sheer numbers of carnivores in such close proximity in the same layer.3 Samir Zouhri, one of the co-authors of the present study said, “This is another sensational discovery that adds to the many discoveries we have made in the Kem Kem over the past fifteen years of work in this region of Morocco. Kem Kem was truly an incredible biodiversity hotspot in the Cretaceous.”3

The global Flood would certainly have washed in marine animals within the massive tsunami-like waves that were crashing across the continents.2 It would have placed a great diversity of animals together like a snowplow as the waves washed landward. Carnivores of all types would be entombed together in their catastrophic grave known as the Kem Kem Formation.

Freshwater plesiosaurs and freshwater coelacanths probably never existed. They were most likely marine animals all along. It was the Flood that brought these strange groups of animals together in death, a spectacle we see globally.4-7 And a global phenomenon is best explained by a global event.