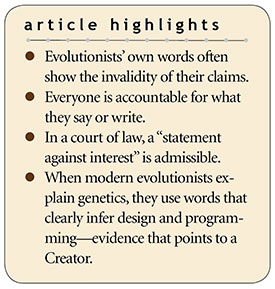 Is it fair to refute evolutionists’ claims with their own words?1,2

Yes, it’s fair to counter and judge someone’s argument by their own words.

However, some evolutionists criticize creationists for using evolutionist quotations to impeach Darwinian teachings. Such critics claim that “hijacking” (i.e., harnessing) such quotations unfairly distorts the initial intention of the quoted evolutionist. But that’s like saying that a message’s content can never be used to refute its own author. Authors are not immune from accountability. Rather, by teaching others, they incur extra accountability.5

Holding speakers and writers accountable for their own words in the context of a courtroom is illustrated by the “statement against interest” rule—an evidentiary exemption to the general rule prohibiting hearsay testimony. This time-honored forensic evidence rule is routinely applied by trial judges so that witnesses can be self-impeached by some of their own words.6,7

Specifically, Federal Evidence Rule 804(b)(3)(A) governs the admissibility of verbal evidence in litigation and administrative law contexts, defining a statement against interest as a hearsay-exception if the quoted statement is one that

…a reasonable person in the declarant’s position would have made only if the person believed it to be true because, when made, it was so contrary to the declarant’s proprietary or pecuniary interest or had so great a tendency to invalidate the declarant’s claim against someone else or to expose the declarant to civil or criminal liability.6

In other words, what a declarant says is credible, and is rebuttably presumed reliable, if a reasonable person would not admit it unless it were true. Thus, whenever an evolutionist admits something like Darwinism’s “missing links” are still missing, that admission is a reliable statement against interest.1,6

Evolutionary geneticists often use information communication terminology such as code, transcription, decipher, translation, program, instruction, messenger RNA, edit, alphabet, etc., to describe the bio-informational workings of human genes. Their very words betray that they are clearly observing a form of programming much more sophisticated than anything IBM ever invented.8,9

In fact, even the word “selection,” as in “natural selection,” is an evolutionist’s telltale admission against interest, because only intelligent beings can “select” whether and how to adjust to the changing conditions of the outside world.2,8,9

Anything you say can and will be used against you in a court of law.10

Perhaps Darwinists need a warning from Dragnet’s Sergeant Joe Friday before they publish their evolutionary imaginations, because phrases like “natural selection” and “hopeful monsters” can and will be used against them by creationists debunking their “science falsely so called.”11