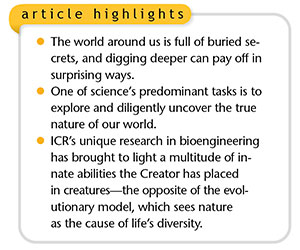 Buried secrets sometimes surface, revealing hidden things. However, if no one is willing to do some diligent digging, much of what is concealed will remain undiscovered.

For example, last year some “grave secrets” were uncovered: human bones from a Viking cemetery concealed in a coastal cliff near Orkney’s Newark Bay.1,2 No gravediggers triggered the coastal cemetery’s discovery—stormy weather did.

Recent storms…have [taken] their toll on a soft sandstone cliff where the [insular coast’s] graveyard is found. As a result, bones are starting to stick out after being exposed and…some are falling down onto the beach.…The size of the Viking cemetery has yet to be determined, though hundreds are thought to have been laid to rest [there].1

Sometimes discoveries, like this one, are unintentional surprises.3 But such fortuitous discoveries can be expanded by “digging deeper.”1,3

The Bible’s record of Earth history is completely accurate and reliable. If pieces don’t seem to fit what we think we know about history, dig deeper—Scripture withstands scrutiny.

Years ago, critics scoffed at how Scripture reported King Belshazzar’s offer of “third-highest” rank in the Babylonian empire to the person who could explain the miraculous handwriting on the wall (Daniel 5:7, 16). Since Joseph was promoted to second place in Egypt (Genesis 41:37-45), why was Daniel only given third place?

In 1924, newly found ancient records showed that Belshazzar’s father, King Nabonidus, had commissioned his son as regent (co-king) to rule while Nabonidus was off in faraway places. Belshazzar was thus in second place in the empire, so third place was the highest he could give to anyone.4

When Charles Darwin announced his theory, few bothered to “check under the hood” to see if there was an empirically verifiable process that substantiated his claim that natural selection serves as a substitute creator to think, favor (or disfavor), and select animals to survive. Thankfully, ICR’s Dr. Randy Guliuzza undertook the herculean task of digging deeper into evolutionist research literature and exposed the natural selection model as an etiological bait-and-switch scam like the Emperor’s New Clothes.5

Dr. Guliuzza patiently uncovered grave secrets and reported study after study, building a mountain of bioengineering research and analysis that not only refuted natural selection as a causal agent for life’s diversity but pointed irrefutably to the exquisite innate engineering the Creator has invested in every creature.5

Sound bites tickle ears, but the truth is often buried in fine print. At ICR, we strive to unearth the truth and provide readable articles on creation science informed by Scripture and biblical apologetics. And we simultaneously aim to report professional scholarship that has depth.

It’s part of the Berean tradition (Acts 17:11). Because digging deeper—finding more truth—will strengthen our faith in God and His Word.