Back in September, I challenged each of us to “Go For It!”1 Rising to the surface of my mind then was the deep burden that I have carried for over five years to put in place a legacy tool that would reach the coming generations. God’s people have always faced seasons of darkness and foreboding—and yet it is during such times that the Lord expects us to move forward with the messages of truth and hope.

Enlarge the place of your tent, and let them stretch out the curtains of your dwellings; do not spare; lengthen your cords, and strengthen your stakes. (Isaiah 54:2)

That was Isaiah’s message to the leaders of Israel during one of the more dismal periods in their history. They did not listen then, but it is clear from this Scripture that they were supposed to “enlarge, lengthen, and strengthen!”—and they missed out on a marvelous blessing that could have been theirs.

ICR took a big leap of faith when we moved our operations to Dallas back in 2006. But the impetus was strong to renew our commitment to another generation, and the Lord has proved Himself more than sufficient to the leading He was giving. ICR is stronger and more capable than before, and our impact has grown significantly. Not only did we “enlarge” the tent—we moved it! And the result has been wonderful.

Over the decades, ICR has had an internal commitment to operate without debt and to keep our ministry open, transparent, and resting in God’s provision through His people. It was our founder’s concern that if we were to follow the various “marketing” appeals and processes that seem to skirt dangerously near worldly processes that ICR would ultimately be entangled in nets of compromise that would hinder or dilute our passion for God’s Word.

Thankfully, we have not sought endowments or governmental funding, or used high-pressure appeals. ICR is still supported by faithful gifts that keep the ministry functioning, coming from “regular” folks who love the Kingdom and have caught the vision of how important scientific affirmation of the creation, the Fall of man, and the Flood of Noah’s day is to the entire message of Scripture. God has supplied all our needs (Philippians 4:19).

When the news broke in 2008 that the Perot family had given $50 million to fund a new science and nature museum in downtown Dallas, the early publicity celebrated the fact that the new project would display the “wonders of evolution.” That news broke my heart, and I became burdened to find a way to somehow counter that message, particularly since it would affect countless children and families who might never know about the tremendous evidence of God’s design and purpose for their lives.

But as is often the case, God’s timing was a bit slower than my wishes. We did not have (yet) enough property to build such an answer to the “monument” that would ultimately aggrandize evolutionary “wonders.” We had just assembled the basics of our science team and were in the early stages of planning for key research projects that would confront the beautifully staged, stunningly presented special effects and growing popularity of the godless story of evolution as presented in the Perot and other museums.

If we are to answer the lies, we must be ready to do so with the “reason for the hope that is in [us]” (1 Peter 3:15). And we must, above all, be sure that the Lord is with us in these efforts, following the advice of Scripture to “sit down first and count the cost, whether [we have] enough to finish” (Luke 14:28). In ICR’s past, the Lord provided the necessary funds “on the go.” That is, as the need becomes clear, funds come just in time to make the next move possible.

ICR is located on a main east-west boulevard, just south of a central east-west freeway, some 10 miles or so from the DFW airport, which is right in the middle of the two major cities of Dallas and Ft. Worth. But if we were going to build a museum and planetarium of any stature, we would need some significant addition to our frontage. An opportunity arose to purchase the adjacent acre. The funds arrived, and the purchase was made in 2010.

It then became clear that we would need more property if we were to provide parking and expansion for the project. An additional two-plus acres became available just as a large and unexpected donation came in, and that property was secured. As we became more aware of the need to build a facility that would handle large numbers, it also became clear we would have to expand our sales and distribution center with enough space for staging new exhibits. That million-dollar project was funded—just like the previous property needs—just in time. We were given over $3 million we did not have previously for absolutely necessary increments in preparation for the answer God had laid on our hearts.

We thought we were ready to go. But it became apparent in late 2010 that we needed to wait for God’s signal to begin. We knew we needed about $20 million to do a proper job. We have spent over $3 million, but the remaining funds were nowhere in sight. So, slowly, as little “extras” came in from small estate gifts and some designated gifts from folks who knew of our dreams, we were able to reserve about $1.5 million beyond our normal operating requirements, in addition to producing the Unlocking the Mysteries of Genesis and the newly released Made in His Image DVD series, all the while praying and waiting for God’s signal to begin.

Then, as I shared with you in September, ICR received a $2 million estate gift that was totally unexpected! That gift, plus the $1.5 million already in the bank, gave me enough courage to start. On top of that, as I began to share my heart with some of my inner circle of friends, I was promised another $2 million for the project. What a gracious God! “How unsearchable are His judgments and His ways past finding out!” (Romans 11:33).

Obviously, all of us are ready to go now! But we still have the admonition to “count the cost” and to be sure we can “finish” what God has opened the door for.

Here are the basics: 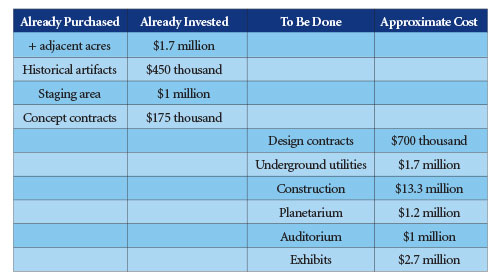 Here’s a quick summary of where we currently stand.

Of a total estimated cost of about $24 million, we have either already spent or have in reserve about 37% of the total project cost. We are ready to go. By the time you read this, we will have already approached a few in the Lord’s family who have the resources to help us substantially. I am expecting that their commitments will bring us to the point where we can start construction sometime in the early spring.

You will be receiving more information in the weeks ahead. Certainly pray with us about this. We are as sure as we can be that the need is real and the time is right. Please do not merely designate your regular giving to help with our Dallas Museum of Science and Earth History. The ongoing operations of ICR will continue, and the funds to assist us with that must continue. But as you pray with us, please consider giving an extraordinary gift to make this legacy tool a reality in 2016.