Sow for yourselves righteousness; reap in mercy; break up your fallow ground, for it is time to seek the LORD, till He comes and rains righteousness on you. (Hosea 10:12)

Most major construction projects begin with a groundbreaking ceremony. I’m not sure where the idea for that came from; it’s been around for a long time. However, the Bible does suggest a reason for godly groundbreaking when the Lord tells Israel to “break up your fallow ground.” That old English farming term is used to translate a Hebrew term for “tillable” soil, ground that should be used to grow crops or to develop some resource that would increase the effectiveness of God’s people or demonstrate the majesty of the God of Israel.

Israel had been languishing for some time, yielding to the lifestyle of the pagan natives surrounding them. Hosea was sent to challenge them to take advantage of who they were in the Lord, shake off the shackles of the ungodly, and turn the fallow (unused) ground to the purpose God had intended for it. God gives them the command to start working and states the promises that will come with their obedience and trust.

The Institute for Creation Research recently had the opportunity to break fallow ground on a project specially designed to uphold God’s truth and reflect His glory. On April 21, 2017, ICR held an official groundbreaking ceremony at its headquarters in Dallas, Texas, to initiate the construction of the ICR Discovery Center for Science and Earth History.

ICR has long had a vision to reach younger generations who are leaving the Christian faith because of the myth that science disproves the Bible. The ICR Discovery Center will showcase the wealth of scientific evidence affirming the biblical account of origins and Earth history. ICR is in a unique position to initiate this venture because it employs the leading science research staff dedicated to the question of origins from a biblical perspective. ICR scientists have explored some of the most challenging questions of faith and science, and their research will be presented in innovative and engaging ways in state-of-the-art exhibits and a planetarium featuring 3-D imagery.

Many of those who have been closest to the project were in attendance at the groundbreaking. Over 300 guests represented the many thousands of supporters who have poured their prayers and resources into bringing this vision to life. Dr. Richard Bliss, chairman of the ICR Board, spoke for the Board members who have diligently and prayerfully overseen the planning and vision of the center. Dr. Jason Lisle, the preeminent astrophysicist who serves as ICR’s Director of Physical Sciences and who designed the center’s planetarium, described the cutting-edge technology that will allow planetarium visitors to virtually explore the wonders of God’s solar system. And ICR Director of Donor Relations Henry Morris IV related God’s special provision through His people that has enabled the center’s journey to this point.

ICR has also been blessed by the outside companies that have had a hand in the discovery center’s development. The international architectural firm The Beck Group has worked with ICR over the past few years to put together the construction plans. Beck Managing Director Kip Daniel shared with the groundbreaking guests how his life was impacted by The Genesis Flood by Dr. Henry Morris, and how special it was years later to have the opportunity to be involved in a project sharing the same message that science supports the Bible. Also present were Michael and Wendy Jenkins, whose talents have played an important role in developing the center’s look and feel. Their company, the world-renowned firm Leisure and Recreation Concepts, Inc. (LARC), is designing the center’s cutting-edge exhibits.

First Baptist Dallas Senior Pastor Dr. Robert Jeffress offered a dedicatory prayer and encouraged everyone there that creation ministry matters because “what you believe about creation determines ultimately what you believe about salvation.” Then three groups ceremonially broke ground to launch the ICR Discovery Center for Science and Earth History—the outside contributors to the development of the Center’s construction and exhibits, the ICR department directors who have worked tirelessly through the countless details involved in a project of this scale, and the ICR scientists who have poured their hearts and their expertise into the creation message the center will proclaim.

It was a special time to celebrate what God has done and will do through the work of ICR. As one longtime supporter at the ceremony said, “We’ve followed the ICR ministry for a number of years…and what’s so exciting is to see [that] what God has revealed in nature is actually [affirming] of what the Scripture says God did. Just to see what is being built now—and the prospect for an even finer way of demonstrating this to people—is a tremendous joy.” The breaking of this ground will allow many more people to “seek the LORD” and His creation truth.

In the Lord’s instruction to Hosea regarding breaking fallow ground, there are two specific requirements included with the command, one of which is “Sow for yourselves righteousness.” Maybe we could most directly apply this to ICR by making sure that everything we plan to do will be both godly in presentation and accurate in content. All our plans thus far have been focused on being careful we do not promote anything other than the biblical message, with all science used as a demonstration of the accuracy and authority of Scripture.

All of the exhibits will have a “Jesus is” theme. For instance, in the gallery that displays the universe, the theme will be “Jesus is the Creator.” In the gallery that deals with the Garden of Eden and the wonder of life, the theme will be “Jesus is the Designer.” Each of the galleries will have an overview theme that will stress something about the wonder and majesty of our Lord Jesus. The discovery center will demonstrate the scientific evidence throughout—and will be a constant source of learning and discovery for all who attend—but the central purpose is to “sow righteousness.”

It is important also that Hosea records God insisting the fallow ground should be designed so Israel could “reap in mercy.” Several of the Levitical laws dealt with making sure that the entire population of Israel would be fed from the bounty of the land. You might remember that Ruth gleaned from the leftovers in the field of Boaz. Just so, we are trying to design the exhibits so that every level of visitor can learn and grow from the layers of information that will be available.

And, although we hope the discovery center can be self-supporting through entrance fees and book sales, we want to make sure it is not designed as a “profit center” but rather as a resource for all who might want to gain a confident knowledge that the Scriptures are both trustworthy and accurate in every detail.

Time to Seek the Lord

Finally, it is abundantly clear that the time is now. We have sought the Lord’s direction for several years. We have submitted the prospect and concepts to you, and all the indicators have come together with sufficient funds and approvals from the many agencies involved in order for us to begin construction of the buildings.

It looks like the major construction will be complete in May 2018, but the complex information within the many exhibits and displays inside the exhibit hall will probably take us another few months. We anticipate a grand opening sometime in the fall of 2018.

But in order to accomplish this, we need your continued help. Although enough funds have come in or been promised for us to begin the construction, we still have to fund the exhibits. There are two ironclad rules of construction: 1) It takes longer than you think it will, and 2) it costs more than you anticipate. We expect we will need around $6,000,000 more to finish the construction and complete the exhibit halls.

There is still about $1,300,000 left in the generous $4,000,000 matching gift that was granted to us. So, if you can give something during the remainder of this calendar year, your gift would be doubled! You can find out more about supporting this project at ICR.org/discoverycenter. Please consider investing with us in this wonderful legacy in the Kingdom. If I heard it once at the groundbreaking ceremony, I heard it many times: “This is so needed, thank you for letting us know about your project.”

Thanks for being part of this. Long after many of us have completed our assignments here on Earth, God will use this discovery center to change and challenge the lives of thousands over the decades ahead. 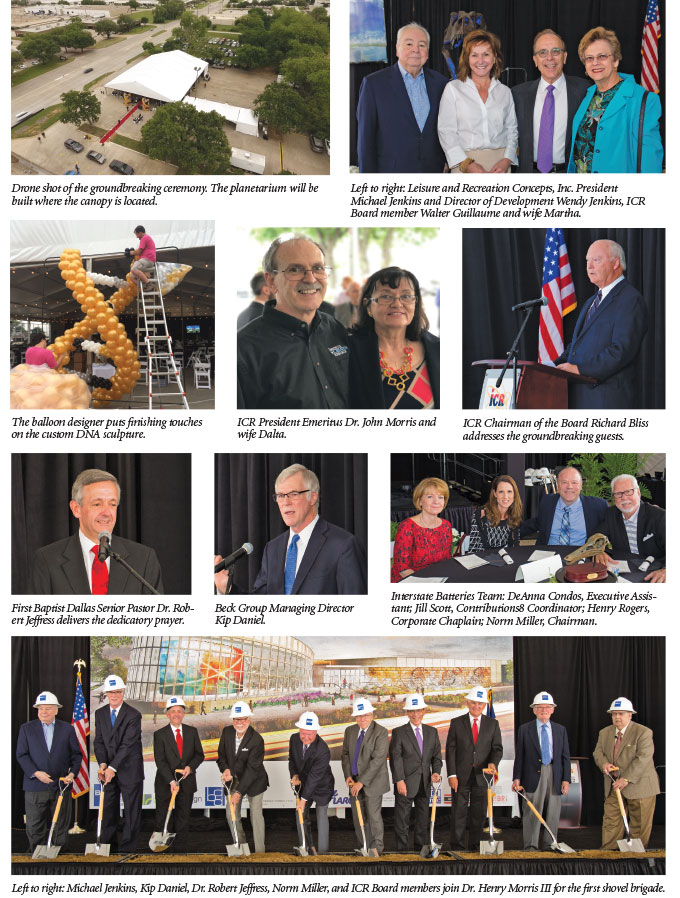 NEWS
Inside January-February 2022 Acts & Facts
How can we use the Bible to guide scientific research? Why is counting ice core layers an insufficient way to determine Earth’s age? How does...
BY: STAFF WRITER
Shop Related Products
$
$
$