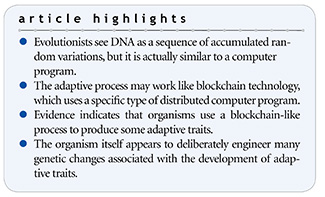 The previous article in the Engineered Adaptability series focused on how a population might continuously track environmental changes.1 We hypothesized that populations are analogous to distributed problem-solving applications. If engineering principles best explain biological functions, then a biological mechanism would likely have system elements that correspond to those of a human-engineered mechanism.

In this scenario, individual organisms correspond to computers running the same distributed algorithm (immanent selection) in order to generate similar solutions (traits). During reproduction, traits are redistributed in a targeted, problem-solving manner (not randomly) to rapidly adapt the population to changing environmental conditions. In contrast to selectionism, which emphasizes competition over cooperation, both the individual and the population are vitally important to the process. This model expects rapid convergence on solutions rather than slow, gradual evolution.

The way the adaptive mechanism works may be similar to a cutting-edge distributed computer program called blockchain technology.

Adaptive Genetic Modifications Appear to Be Controlled, Not Random

Evolutionary selectionism believes that outside forces called selective pressures produce DNA modifications that lead to trait variations in organisms. Thus, DNA is an accumulation of selected random variations. However, selectionism finds it difficult to simultaneously explain both variation and stasis. The dilemma is that DNA cannot be modified via random mutation without also quickly losing its ability to produce traits. In other words, this kind of variation tends to not simply alter traits but eliminate them.

In contrast, computer software specialist Mitchel Soltys uses engineering principles in a model that compares DNA to a computer program that combines both instructions and data in a single stream.2 Though the code is bounded by fixed, top-level instructions, input data called variables enable variation. Soltys describes how this model accounts for both variation and stasis:

Using abstraction, computer programs can also dynamically load, move and control portions of instruction code, called subroutines or functions, during execution to perform their job. It is even possible for computer programs to generate sections of programming code on the fly, turn them on and off and call them in different orders, but it is always a computational result of information at a higher level created by an intelligent being or beings. No matter how many layers of abstraction you have in a computer system, there is always a top level instruction set that controls everything below it and must be the result of a creative mind.2

Blockchain was developed to run the Bitcoin digital currency network. It can also be used, however, in a range of applications in which a distributed consensus must be established—similar to the way populations rapidly adapt. How do blockchains work? 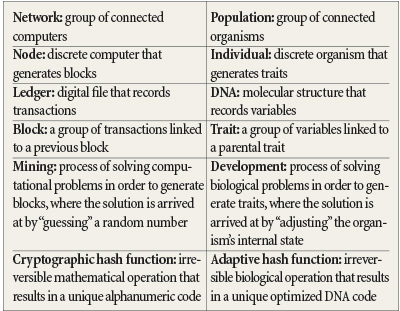 Using engineering principles to explain biological function opens up powerfully insightful ways to understand biological phenomena. Remarkably, a side-by-side comparison of the transactions recorded in a blockchain to variables recorded in DNA reveals analogous processes between creating blocks and generating adaptive traits. We can draw a direct correspondence between the elements involved in each process.

The cryptographic hash function (f ) used to create new blocks can be represented as follows:

We can generate a similar function to update our concept of the biological mechanism that produces adaptive traits:

We hypothesize that adaptive traits result from a biological function based on the inputs of inherited information (previous trait), information gleaned from sensing environmental conditions (new variables), and the internal resources available to an organism at the time the trait is generated (internal state).

A hash function is a mathematical process that can take any amount of incoming data and return a data output of a fixed size, as specified by the function. Thus, if adaptive traits are produced by this type of function, we would expect the length of DNA sequences associated with the traits to remain stable. This implies that even though DNA sequences may be altered, reshuffled, or recombined in order to produce adaptive traits, the size of the genome should remain fixed over time.

Blockchain Technology and the CET Model

The CET model explains the regulated, rapid, and targeted characteristics of adaptation. CET hypothesizes that organisms use sensors, logic mechanisms, and output responses to track environmental changes. Like human-engineered sensors, biological sensors are sensitive to specific environmental conditions and are designed to ignore others.5 Sensors trigger adaptive responses both in the behavior of adults and in the development of their offspring.

This is where new variables may play a role. When environmental conditions change, sensors trigger an organism’s pre-programmed logic to select pre-existing information designed to respond to the changed condition. When combined with inherited information and an organism’s internal state, these new variables comprise the inputs to the function that generates an adaptive trait—one altered from the inherited trait in a targeted way.

If many adaptive traits are produced by adaptive hash functions that draw data from multiple sensors and internal systems, then we would expect to observe the following characteristics in living systems.

Is there any evidence that adaptive traits can be produced by adaptive functions? Yes, there is.

The threespine stickleback, a small fish with marine and freshwater variants, provides an excellent example of adaptive traits associated with genome-wide changes to DNA. Marine variants are generally larger in size and darker in color, are heavily armored with rows of bony plates, and have a pelvis with two long spines. Smaller freshwater variants are generally lighter, have few or no armor plates, and have a pelvis lacking spines. Both variants still interbreed along coastal rivers and produce both marine and freshwater offspring.

Their traits appear to be determined both by inheritance and during development. One study demonstrated that differences in adaptive traits between the marine and freshwater variants are generated by dynamic reassembly of many DNA sequences distributed across many chromosomes.6 Further, these differences were associated with both protein-coding and non-coding DNA sequences, with non-coding sequences having the prominent role (83% vs. 17%). This fits expectations if adaptive traits in threespine stickleback are produced “on the fly” by changes to the “instruction code” as hypothesized in the computer program model of DNA.

If adaptive traits are produced by a biological function, then inputting multiple new variables to the function would enable a significant divergence of traits in a single generation. A 2016 paper documents a particularly striking example of precisely this kind of divergence in a species of nematode (roundworm) that colonizes figs.7 When they arrive at a fig after hitching a ride on pollinating wasps, all of the nematodes are small and have a simple tube-like mouth for feeding on microbes.

However, the offspring of colonizing nematodes develop into four distinct types with “strikingly disparate” shape and size of mouth parts. Three of these forms undergo radical dietary changes and feed on other nematodes. The researchers demonstrated that the colonizing form and distinct offspring “morphotypes” are genetically identical. The “extreme disparity” in the traits of offspring results from their responses to the different conditions encountered during development.7 Further, the researchers identified three species that each have the ability to generate five distinct morphotypes. We can expect this if adaptive traits are generated by a biological process similar to the one described above.

Other examples illustrate how adaptive traits may be constrained in a mathematically predictable manner. Researchers studying hammerhead sharks discovered an inverse relationship between the surface areas of the hammer (cephalofoil) and pectoral fins such that the combined surface area of both is a constant.8 This relationship holds despite significant variation in the width of cephalofoils, from the winghead shark with a cephalofoil half its body length to the bonnethead shark with small knobs. This relationship indicates developmental constraints from a predetermined algorithm or function.

An even more impressive study searched for a mathematical description of beak shape diversity in songbirds.9 The researchers discovered that the diverse beak shapes of all songbirds are constrained to mathematically precise conic sections that are somehow linked to the modulation of genes that govern beak morphology during development. This is exactly what we would expect if the development of adaptive diversity in beak shape is controlled by a constrained function.

The hypothesis that organisms generate adaptive traits using a biological function in a blockchain-like process opens lines of inquiry that previously haven’t been considered—with profound implications. First, it implies that the primary purpose of adaptation is not survival but optimization. Second, it implies that many genetic changes associated with the development of adaptive traits are deliberately engineered by the organism itself. These implications logically follow from the observation that organisms appear to be using a mathematically precise problem-solving process analogous to a human-engineered computer program in order to arrive at targeted solutions to environmental problems.

The remarkable diversity and adaptive abilities of Earth’s creatures can only be the result of the brilliant engineering and master design of their Creator, Jesus Christ.

Far from being the result of random external pressures, the remarkable diversity and adaptive abilities of Earth’s creatures can only be the result of the brilliant engineering and master design of their Creator, Jesus Christ.