ACTS & FACTS     FEATURES
Behind the Scenes of Uncovering the Truth about Dinosaurs
BY JAYME DURANT *  |
FRIDAY, SEPTEMBER 30, 2016

In 2014, ICR produced Unlocking the Mysteries of Genesis. The following year, we produced Made in His Image. This year, our scientists and host Markus Lloyd are back for a new DVD series—Uncovering the Truth about Dinosaurs.

While scripts were in the process of drafting, review, and approval, we discussed the unique challenges of this project. One of the biggest is that dinosaurs are extinct—they aren’t grazing in some swamp or field outside Dallas waiting to be filmed. Animation was extremely important to this project, and our film production team did a great job creating convincing, lifelike dinosaurs.

We filmed at a dinosaur animatronic manufacturing warehouse, a college paleontology lab, a San Antonio historic mission, the only natural lake in Texas, an East Texas botanical garden, a Christian university library, and a remote Wyoming dinosaur fossil dig site.

While each project has its own challenges, they all have their signature memories. A few things stood out to me as we spent a year uncovering the truth about dinosaurs. 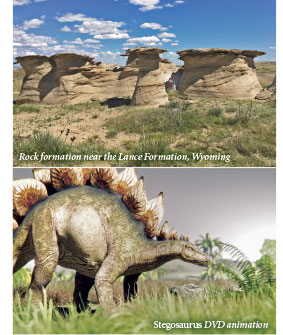 Many of the people we encountered as we traveled and filmed cling to evolution’s story. From the makers of giant dinosaur models to students at Christian universities, most people assume dinosaurs lived millions of years ago, long before humans walked on Earth. Park rangers present their spiels with such authority, and postcards and historical site markers seem to confirm evolution’s tale to park visitors with such certainty, as to leave little doubt millions of years is a proven fact. Even many believers we spent time with have a hard time figuring out how dinosaurs fit with the biblical record.

Fascination with dinosaurs is universal, and many of those we worked with asked questions as they began to see the scenes unfold. Hotel workers, boat guides, venue owners, librarians, park managers—they all had questions. What about the science (as if the evolution of amphibians to dinosaurs is scientific)? What about the fossil record? But dinosaurs lived in a different age from humans, right? How did dinosaurs go extinct? How could a flood cover the whole earth? How could huge dinosaurs fit on the Ark? How could so many people be wrong?

Everyone, everywhere, displayed fascination with these mysterious creatures, but many were still in the dark when it came to the truth about dinosaurs. They embrace the evolutionary ideas that pervade our culture. Little of the general public’s understanding rests on science—it’s based on the imaginations of creative filmmakers, museum placards, and evolutionary textbooks and teachers. Confusion dominates the topic of dinosaurs.

God Uses People’s Curiosity to Draw Them to Him

When a film crew breaks out the cameras, people show up. Curiosity causes them to pause and investigate. How can we use that curiosity to pull people into the truth of God’s Word? How do we create an opportunity for people to pause and wonder about the Creator? How can we use that natural inquisitive nature of humans to lead them to understanding? We hope this series will encourage our viewers to seek answers and to experience the thrill of discovery.

Laughter Behind the Scenes

As always, the production team laughed along the way. Unusual things happen when you film, particularly when you travel with a film crew. How is it that South Dakota had record-breaking 100-degree temperatures when we arrived there to travel to the fossil dig site, while it was only 72 degrees in Texas? Have you ever had to count cattle guards to follow directions to a location? Sixteen, to be exact. What happens when you lose count? I’m so glad Markus stayed on top of that task! We were miles from civilization on an 8,000-acre Wyoming ranch about to call “Action”—when a road grader showed up and began to repair the gravel road. 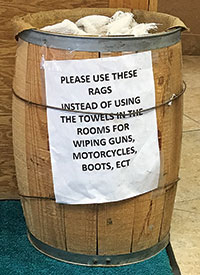 We discovered that filming on a dirt road turns a black Jeep almost white—inside and out. We also learned how to mildly rough it. When there’s no time for a shower before dinner, the next best option is to use a blow-dryer to blow the dust out of your hair and clothes. We stayed in a hotel with a sign that read, “Please use these rags instead of using the towels in the rooms for wiping guns, motorcycles, boots, ect.” Yes, spelled e-c-t.

We witnessed dozens of antelope grazing in Wyoming fields—but somehow we avoided snakes and alligators while standing along the water’s edge in East Texas. The local sheriffs of a small East Texas town decided to bring their jail inmates to the botanic gardens to pull weeds on the day we filmed about the wonders of God’s creation. Coincidence? Or did those inmates need to hear about the behemoth that day? I wondered about the history of the town we stayed in—Uncertain, Texas—and how it was named. We all had a laugh when we passed the sign pointing us to a local church. You guessed it, the Church of Uncertain!

And we shared moments that left us in awe. A lone cypress in the middle of a lake drew our thoughts to God’s Word. Raindrops appeared when we stood at the edge of a Texas lake filming about the Flood of Noah’s day, with perfect little ripples forming on the surface. Black clouds and flashes of lightning engulfed the Wyoming sky just as we wrapped up shots that speak of God’s majesty. No artist could have produced the backdrops that God provided as we filmed Uncovering the Truth about Dinosaurs. 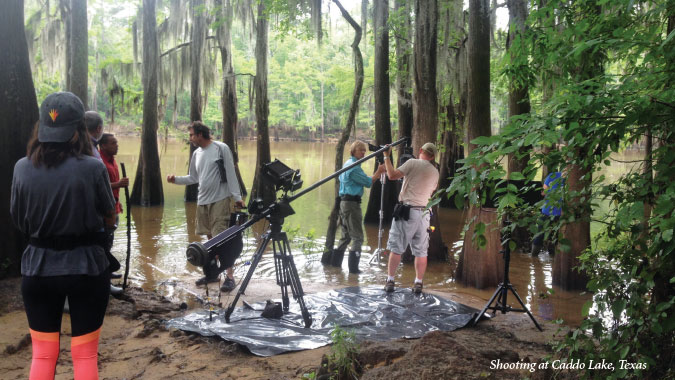 Cite this article: Jayme Durant. 2016. Behind the Scenes of Uncovering the Truth about Dinosaurs. Acts & Facts. 45 (10).