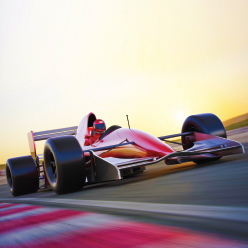 Bright red with perfect details, a Ferrari Formula 1 F1 SF15-T diecast model race car would make a great present! Young boys around the world push their model Ferraris across the floor while making sounds of growling engines and squealing tires. They envision themselves seated behind the wheel, racing on winding tracks and reaching speeds over 200 miles per hour. A select few will become race drivers. Along the way they will be physically transformed into something they probably haven’t considered: a world-class competitive athlete.

Watching a Formula 1 (F1) car maneuver at high speeds is exciting. Seated in one during its performance is a different story altogether. Even riding as a passenger in dual-seated racing vehicles provides a whole set of sensations—mostly quite uncomfortable—that must be experienced to be appreciated. They are so unlike average driving that a realistic experience in one of these machines can’t be imagined. The physical strains demand that the drivers be in excellent physical shape.

As with most athletic challenges, mental concentration must equal physical performance. Skilled operators can only effectively operate these high-performance machines by managing a barrage of incoming data and executing rapid responses. Unlike fighter aircraft, where computers are being continually integrated into operation to help manage the flood of data, F1 racing rules greatly limit computer operation of the vehicle. This keeps the sport as challenging as possible. The race is a competition of driver skill and car performance—with driving ability as the greater factor. Fortunately, the human body comes well-equipped to handle the challenges.

Without many unique sensors, neither the F1 car nor the driver would be able to relate to their environment.

Formula 1 cars are the fastest course-racing cars in the world. Despite rules limiting their weight and performance, these vehicles are incredible engineering achievements. The entire vehicle weighs only around 1,520 pounds, including the fuel and driver, but comes equipped with a 900-horsepower engine. The engine speed hits 15,000 revolutions per minute. Formula 1 cars accelerate from a dead stop to 100 miles per hour in about three seconds and exceed 230 mph.

Though some street-legal sports cars are fast, none match F1 cars for high-speed maneuvering. At high speeds, the low and wide body style develops very low pressures under the car. High air pressure pushes down on the body to keep it on the track, equaling almost three times the weight of the car itself. This feature, combined with exotic suspension and large tires made of “sticky” rubber, enable the car to resist skidding off the track on tight, high-speed turns.

If you are susceptible to motion sickness riding through the mountains in a minivan, then F1 racing is not for you. When a car rapidly accelerates or makes a turn, the force you feel pushing you backward or sideways is called g-force. One “g” is equal to the force of your body weight. The sensation of g-force against the body contributes to feeling nauseous. By comparison, commercially available sports cars only develop about one g of lateral force during turns, but when an F1 car turns at high speed, the driver sustains up to five gs, or five times their body weight. Moving one’s arm can feel as if there’s a bowling ball attached to it. Rapid decelerations are physically harder to tolerate. In some races, the driver moves out of one turn and accelerates to about 220 mph and then decelerates in two seconds to 35 mph for another turn. This maneuver applies over four gs of forward force on the body against the restraining harness. To make this rapid deceleration, the driver’s left leg modulates the brake with over 240 pounds of force, and then gradually eases back during the turn while the right foot moderates the accelerator. 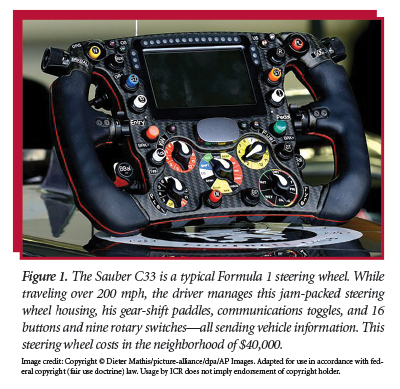 Since F1 cars can cover the length of a football field in one second, drivers must monitor approaching track activities over 200 yards in front of them…as well as the speeding cars around them. In addition to just driving the car, information management competes for the driver’s attention. Modern helmets enable constant two-way communication with support engineers. The F1 car is packed with sensors that relay information to the car’s nerve-center that resides right on the steering wheel. The steering wheel in Figure 1 shows that drivers must manage an incredible volume of incoming information with split-second timing. How can they do it?

Drivers must manage an incredible volume of incoming information with split-second timing. How can they do it?

If the engineering genius behind the F1 car is incredible, then the design of the human drivers who compete in 19 annual races, rain or shine, is simply beyond comparison. Like many athletes, they endure grueling conditions. Drivers will lose about five pounds in water weight during the two hours they are strapped into a cockpit where temperatures can reach 120 degrees. Power-assisted functions for steering and braking are disallowed. Noise levels can exceed 130 decibels—an intensity approaching a jet engine at takeoff. Engine vibrations are transferred throughout the vehicle. Seated only four inches above the ground with tight suspension, road lumps and bumps punish the body throughout the race.

Without many unique sensors, neither the F1 car nor the driver would be able to relate to their environment. In fact, they would be functionless since a sensor acts as the “trigger” in either’s response to specific stimuli. Sensors are the key elements that make a system responsive and/or adaptable, yet, regrettably, they are often omitted in descriptions of biological function. The F1 driver’s body is packed with thousands of sensors gathering data for the brain that, compared to his car’s, are highly miniaturized and even more sophisticated.1

If the engineering genius behind the F1 car is incredible, then the design of the human drivers who compete in 19 annual races, rain or shine, is simply beyond comparison.

During an interview, one F1 driver described what he senses during the race and how he interprets this incoming data in real time.2 Steering wheel vibrations in his hands tell him about the grip of his tires in a turn. His fingers constantly modulate the gear shifter, not just for speed, but to also manage the bite point of the tires. His eyes take in data that make him spatially aware of the other cars and road hazards. He smells the odors coming from the tires and fluids of the car in front of him to discern the performance of his competitor’s vehicle. He deftly manages his right foot to regulate speed, wheel spin, and control tire wear. His left foot moves less than a quarter of an inch to apply and release several hundred pounds of force on the brake for a fraction of a second while sensing small vibrations indicative of a skid or locked brakes. The strain on his neck resisting the g-forces that cause his head to weigh up to five times the normal amount is part of managing correct turning speeds. The sound of the revving engine is constantly monitored, along with tire chatter and track sounds. The rest of his body senses motions associated with wheel spin, lateral skidding, or mechanical problems.

An enormous amount of data reaches the human brain from just the inner-ear sensor that monitors linear motion. The resting signal rate is about two million impulses per second. Now add signals from the thousands of other sensors whose rates are fluctuating due to motion. Through processes that are still unclear, the brain can readily process this data into information, program the driver’s responses in less than a second, and enable a driver to previsualize his actions two turns in advance.3

[The] oversimplified belief was that synapses acted like basic on/off switches—but nothing could be further from the truth since the brain acts more like a quantum computer than a digital computer. Just one synapse alone can contain about 1,000 molecular-scale microprocessor units acting in a quantum computing environment. An average healthy human brain contains some 200 billion nerve cells connected to one another through hundreds of trillions of synapses….The study’s results showed a single human brain has more information processing units than all the computers, routers, and Internet connections on Earth.4

The equivalent man-made devices would require at least 10 megawatts of power to operate. The human brain uses only about 10 watts.

Who can begin to grasp the knowledge and capability of the Lord Jesus, who designed F1 drivers and other world-class athletes?

Who can begin to grasp the knowledge and capability of the Lord Jesus, who designed F1 drivers and other world-class athletes? The quality of His craftsmanship evidenced in human beings should cause the best F1 engineers to stand in applause.