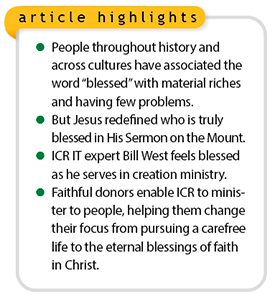 During the days of Jesus, being blessed had a different meaning from what Christians understand it to mean today. The Theological Dictionary of the New Testament says the word for “blessed” was used by Greeks when talking about gods and their blessedness. Later, it was used to describe how the rich were free from worry.

When Jesus preached the Sermon on the Mount, He redefined the word for all who listened. All people want to be blessed, and many people looking up at Jesus that day had in mind what being blessed would look like for them. It just wasn’t what they were expecting. In Matthew 5, Jesus tells His followers that the blessed are those who are poor in spirit, mournful, meek, hungering and thirsting after righteousness, merciful, pure in heart, peacemakers, persecuted for their righteousness, and reviled by this world for Jesus’ sake. This does not sound like the path to being rich and loved, today’s version of “blessed.” Yet for those who follow Jesus, we can see it.

One weekend while in Gilmer, Texas, I witnessed the first outing of one of my best friends’ little ones into the world of Little League Baseball. As joyful a time as that was, I will remember more what happened later. We had lunch downtown with those same friends and family. That day, they were having a barbecue contest downtown, so the square was full. I decided to wear one of my ICR T-shirts for two reasons. The first reason was the name of the baseball team had dinosaurs in it.

Secondly, I had hoped for a reaction from someone who would read it, and someone did. A gentleman walked up to me and asked what it meant. I was wearing the “Dinosaurs Est. Day 6” shirt, and he was curious. He had never heard of the Institute for Creation Research, so I let him know all about us. I felt so much joy from that. Jesus knew when He was speaking to those people on the mount that most of them were not the rich elite but might have wanted to be. He also knew that if they focused on what He wanted instead, they would get way more joy than what money could bring them. 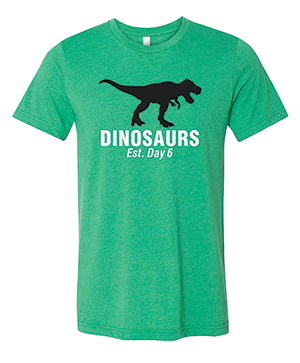 That day I felt blessed, and that wasn’t the only day. I love my job working in information technology, and it always seems like I’m blessed whenever we need to do an upgrade or fix something that just got old and worn down.

Every time I think about the donors who give money to ICR, I feel blessed. God works through our donors to help us get to where we need to be, to stay at the cutting edge. Those donations have helped us to create things like designs for T-shirts so that introverts like me can have a way to spark up those conversations to help spread Christ’s kingdom. They also helped to get the ICR Discovery Center for Science & Earth History off the ground so that we can equip those brave souls who will use the information they gain from it to go and be blessed with the kind of blessing Jesus was talking about—the favor of God and heavenly riches.

* Mr. West is IT Systems Administrator at the Institute for Creation Research.

Flood Solves Mystery of Amazon Sea
In the past 15 years, it’s been determined that a vast ocean once covered the western Amazon drainage basin.1 However, studies of the...
BY: TIM CLAREY, PH.D.
More Creation Science Update

Deep-Sea Lobster Microbiome
Research continues regarding complex and amazing microbiomes found on or within a variety of creatures.1 The microbiome is a microbial community...
BY: FRANK SHERWIN, D.SC. (HON.)
The Latest
NEWS   ACTS & FACTS   PODCASTS