"And the light shineth in darkness; and
the darkness comprehended it not." (John 1:5) 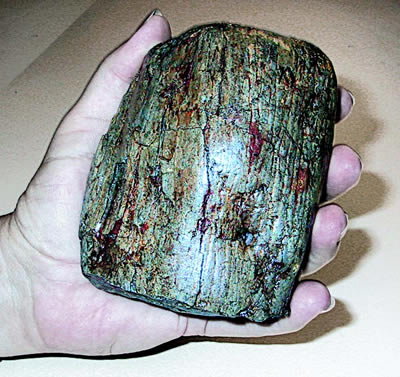 Common folklore holds that petrification takes "millions and millions of years." Even though every knowledgeable scientist knows differently, this misconception continues. The great ages concept forms the backdrop for the entire evolution worldview, thus there's no desire to lessen the hold "millions and millions of years" has on the lay public. But petrification can and does happen rapidly. At least this argument can and should be removed from evolution's arsenal.

Petrification is that subset of fossilization in which the organic material is encapsulated or replaced by silica. In wood it can best be accomplished by injection of hot, silica-rich water into the wood. The silica fills in the voids left by decaying cells, or, most often, surrounds each cell with an impervious shell, halting all organic activity or decay.

Wood can be petrified in a laboratory in a very short period of time using high pressure injection. Likewise in nature many examples can be given of recent or living objects rapidly petrifying in the presence of silica and hot water. In Yellowstone National Park, hot waters percolating through volcanic ash dissolve the silica contained therein. Trees growing near the bubbling sources naturally draw the waters into their trunks. As the silica penetrates into the pores, organic activity is interrupted, and the tree eventually dies by petrification.

Many, many examples could also be given of human structures, mine timbers, bridge supports, etc., being petrified since their time of emplacement. It obviously doesn't take a long time; it takes the right conditions.

Recently, at a seminar in the state of Washington, I was given a "petrified fence post" pictured above. Subsequent analysis showed that it was definitely petrified wood, had a nail imprint and marks of a strand of barbed wire. It was found along an old fence line probably dating from the late 1800s in an area of central Washington dominated by a thick blanket of volcanic ash. All that remained of the post was a stub four inches long, three inches wide and two inches thick. It was obviously a "worked" piece of wood, for the clearly visible tree rings had been truncated. The log from which it had come was probably two feet or so in diameter, judging from the curvature of the rings.

Does it prove anything? No, not really, but maybe this report will encourage some reader to realize that these long age/evolutionary stories of "millions and millions of years" he's heard over and over again are really just myths. The Biblical truth of creation/flood/young Earth might just be right after all.