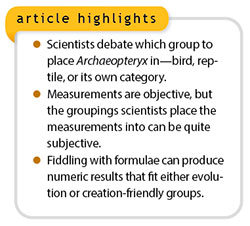 Sometimes scientists get a chance to collaborate. This happened last year when a fellow creation-based researcher invited me to contribute comments about bird and dinosaur anatomy to his statistical analysis of relevant fossils. The end result was a technical (i.e., peer-reviewed) article published in the Journal of Creation.1 Our main question asked if certain fossils’ features fall into an evolution-friendly or Genesis-fitting classification. This experience illustrated how shared talents can lead to a more defensible worldview.

We scientists too often believe our results came from objective analyses, not seeing the subjective ideas that crept in unnoticed. Evolutionary workers now call dinosaurs “non-avian dinosaurs” to distinguish them from birds, which they call “avian dinosaurs.” They have classified some fossil birds as reptiles and certain fossil reptiles as birds. Many bolster these beliefs by citing analyses backed with numbers from measurements, formulae, and statistics. What could be more objective than numbers?

But the statements “birds evolved from dinosaurs” and “God created…every winged bird according to its kind”2 cannot both be true.3 Do the numbers really support this evolutionary perspective? Our analysis showed that those kinds of numbers are more subjective than they at first appeared. 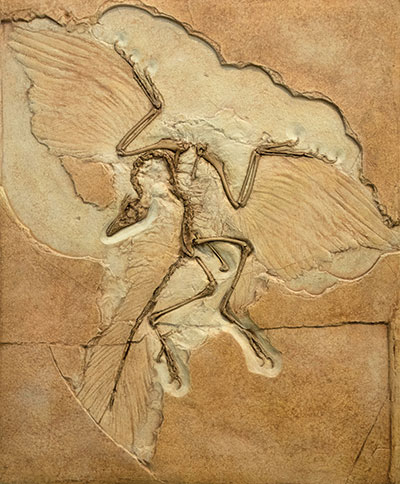 Computational biologists use formulae to assign numbers to estimates of how different one specimen is from another. The raw data are the fossils in the ground—fossils that are almost always incomplete. Someone has to measure various parameters, like the number and placement of holes in the skull, teeth in the jaw, or claws on a foot.

Then, formulae turn those initial measurements into values that indicate how likely it looks for creatures to belong to different kinds. A simple example formula uses a calculation to estimate the anatomical distance between two specimens: dij = mij/nij.4 Workers can add to this an assigned cutoff value, usually different for each set of fossil measurements. Stricter cutoffs produce more groups and looser cutoffs lump more specimens into fewer groups. Which slant would you prefer?

These processes present plenty of room for bias. Subjectivity enters when selecting fossil sets, creature traits, the importance of each trait, completeness of data sets, which formulae to use, cutoff values, and more.

Prior studies have grouped the extinct bird Archaeopteryx with certain extinct reptiles. But Archaeopteryx was no reptile, despite what someone’s numbers may say. Its body balanced over its knees like modern birds, not over its hips as in heavier-tailed theropods. It had flight feathers like birds and unlike theropods. However, it had teeth in its beak and long tails, unlike most birds.5

Numeric results that lump this creature with reptiles play into the impossible story that theropods evolved into birds.6 That’s why we did our own study. Our new filters recategorized some of the same specimens using the same trait lists that others had used. And our equally numeric results separated Archaeopteryx from reptiles.

What does all this show?

My small part in this project helped me see even more ways that subjectivity creeps into the classification process. In response to the one who says Archaeopteryx was a dinosaur and that numbers back it up, I can now ask, “Whose numbers?”