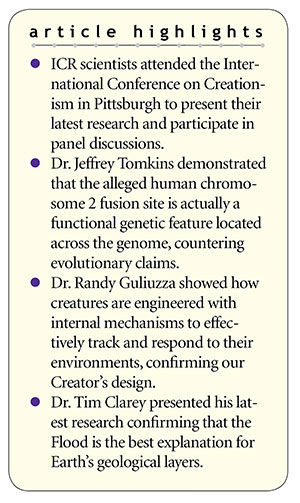 ICR scientists recently attended the International Conference on Creationism (ICC) to present their latest research and participate in panel discussions with others in their respective fields. The conference was hosted by the Creation Bible Fellowship of Pittsburgh.

Dr. Jeffrey Tomkins presented research from his ongoing evaluation of the alleged fusion of two chimp-like chromosomes to form human chromosome 2.1 First, Dr. Tomkins reviewed the history of his research, which showed that the alleged signatures of this event in human DNA—the so-called “fusion site” and “fossil centromere”—were each functional features inside active human genes. Not only does this debunk the evolutionary fusion idea, it also refutes the claim that this so-called fusion site is an accident of evolution. The discovery that its telomere-like sequence was an important functional switch inside a gene led Dr. Tomkins to investigate whether it might be found in other places within the genome. Thanks to data generated from an ongoing genome project called ENCODE, he discovered thousands of these internal telomere-like sequences across the genome acting like genetic switches. What many thought was a rare remnant of evolution is actually a prevalent feature in the human genome.

What many thought was a rare remnant of evolution is actually a prevalent feature in the human genome.

Dr. Randy Guliuzza described a new creationist model called continuous environmental tracking that explains how organisms adapt to changes in environmental conditions.2 He showed how creatures seem to be tightly tracking their environmental conditions and self-adjusting to changes in ways that are highly regulated, rapid, and repeatable. Some of their responses are so targeted that they are predictable. These characteristics are consistent with products of purposefully engineered internal mechanisms.

Dr. Tim Clarey presented two papers from his ongoing geologic column research. One paper established a worldwide flood as the origin for the column.3 Dr. Clarey explained that only a true global flood could explain the extent and universal nature of the geologic column. Instead of demonstrating evolutionary progress, the same types of fossils found around the world in similar strata are actually the result of a global event that inundated the same ecological levels at the same time. His second paper detailed how the order of the megasequences can help reveal clues about the pre-Flood geography, identifying shallow seas and lowland and upland environments.4

Dr. Clarey also participated in the Geosciences Workshop as a panel member. The symposium examined Flood boundaries, with particular emphasis on the post-Flood boundary. Dr. Clarey and Dr. John Baumgardner collaborated to make a strong case that the post-Flood boundary must be in upper Cenozoic strata based on the nature of global stratigraphic data and the age relationships of the ocean crust. The continuous deposition of marine limestone, extending from the Cretaceous up through the Miocene across North Africa and the Middle East, invalidates the claims of Flood sediments terminating at the end of the Cretaceous.

ICR scientists spoke to packed rooms about scientific research that furthers the creation message. Your faithful support enables us to continue to lead the way in the battle against evolution. Thank you!