Did you know airplanes evolve? A 2014 research article titled “The Evolution of Airplanes,” written by Duke University’s distinguished Professor of Mechanical Engineering Adrian Bejan, makes that very claim.1 He begins with all the visible differences between a biplane and a jumbo jet. Airplanes have gotten bigger and faster over the decades. We could say airplane design evolves in the sense that it changes over time.

A second look reveals some common features like engines and wings. What is the best way to explain both the similarities and differences at the same time? Are we seeing a core common design enhanced with many ingenious variations? Or did all modern airplanes descend from a common, primitive airplane ancestor, evidenced by similar ancestral traits but with new features adapted to new conditions? These questions sound a lot like those asked by evolutionists and creationists about living creatures. Bejan wrote his article to supply those answers.

First, we must know what Bejan means by “evolve.” He zigzags in his definition, initially saying, “Evolution means a flow organization (design) that changes over time.” The generality of this definition makes it uncontroversial—but almost useless. However, it eases acceptance of the far more specific, hotly disputed theory of evolution. For the rest of the paper, he uses biological evolution in the sense of a universal common ancestor that gave rise to life’s diversity by a long, natural process of modified descent. Bejan argues that the “evolution” of the “human-and-machine species” clearly depicts Darwinism.

His premise raises a couple of questions. Why must Bejan conjure up a “human-and-machine species” (whatever that is)? Can we reasonably assume that any “evolution” we observe in this mystical species accurately reflects natural processes?

Bejan makes a telling disclosure about evolutionary theory as he explains why we can’t use real organisms as examples of evolution.

In biology, evolution is largely a mental construct built on imagination, because the time scale of animal evolution is immense relative to the time available to us for observations. We cannot witness animal evolution, and this places the biology argument for evolution at a disadvantage. It would be useful to have access to the evolution of one species in real time….The species to watch is the human-and-machine species.1 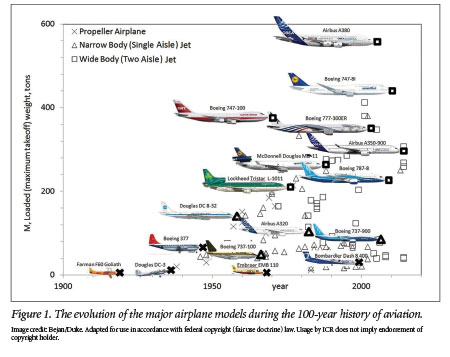 The centerpiece of his case is the article’s Figure 1, which depicts “the evolution of the major airplane models during the 100-yr [sic] history of aviation.” After readers carefully study this figure, Bejan contends that descent with modification will be so self-evident that these new insights will “open everybody’s eyes to the natural phenomenon called ‘evolution.’”1

Though evolutionists think this argument is solid, Bejan actually makes a common evolutionary blunder. He supposes that just by looking at a succession of variants from anatomical traits, DNA sequences, or fossils that diverge from a norm that descent with modification is the self-evident explanation. But merely lining up successions of similar-looking objects fails as scientifically adequate proof of evolution.

One problem is that studying pictures of airplanes does not by itself provide evidence about any evolutionary mechanisms. Unless a plausible biological mechanism capable of answering our key questions is provided, these pictures are only linked by imagination. Neither Figure 1 nor the remainder of Bejan’s research paper describes the evolutionary mechanism.

The most obvious problem is the availability of another equally valid, if not superior, explanation. When people look at different kinds of airplanes, they know from experience that the real explanation for similarities and differences is engineering processes that come from the minds of real engineers. The most rational conclusion is that a core common design was enhanced with many ingenious variations.

Evolutionists like Bejan often point to the slow, successive modification of man-made things over time as examples of how they interpret fossils or DNA sequences. However, this is known as Berra’s Blunder.

Former UC Berkeley Law School Professor Phillip E. Johnson coined the term “Berra’s Blunder” in his 1997 book Defeating Darwinism by Opening Minds. In one section titled “Learn the difference between intelligent and unintelligent causes,” he explains why this should be a basic proficiency for all advocates of intelligent design. He uses several illustrations to show how “this is a distinction that many otherwise capable scientists do not understand.”2

One of Johnson’s examples is evolutionary biologist Tim Berra. In his 1990 book Evolution and the Myth of Creationism: A Basic Guide to the Facts in the Evolution Debate, Berra says, “Everything evolves, in the sense of ‘descent with modification,’ whether it be government policy, religion, sports cars, or organisms.” He applies “evolution” to Chevrolet’s Corvette Stingray automobile to illustrate his point. He says, “If you compare a 1953 and a 1954 Corvette, side by side, then a 1954 and a 1955 model, and so on, the descent with modification is overwhelmingly obvious. This is what paleontologists do with fossils, and the evidence is so solid and comprehensive that it cannot be denied by reasonable people.”3

Berra summarizes everything by claiming that the causal mechanism of change between living creatures and man-made Corvettes is the same:

The point is that the Corvette evolved through a selection process acting on variations that resulted in a series of transitional forms and an endpoint rather distinct from the starting point. A similar process shapes the evolution of organisms.3

Johnson’s analysis spots several logical blunders. His concise reply demonstrates that either he is not a “reasonable” person (as Berra claims) or that he is truly a lucid thinker:

Of course, every one of those Corvettes was designed by engineers. The Corvette sequence—like the sequence of Beethoven’s symphonies to the opinions of the United States Supreme Court—does not illustrate naturalistic evolution at all. It illustrates how intelligent designers will typically achieve their purposes by adding variations to a basic design plan. Above all, such sequences have no tendency whatever to support the claim that there is no need for a Creator, since blind natural forces can do the creating. On the contrary, they show that what biologists present as proof of “evolution” or “common ancestry” is just as likely to be evidence of common design.4

Those who commit Berra’s Blunder usually combine two elements. First, they miss how reasonable people might explain similarities and differences in a variety of ways simply because they have different perspectives. They overlook other possibilities, fixate on common descent, and insist that it is the only explanation.

Second, they also neglect to rightly distinguish between intelligent and unintelligent causes. They see an engineer exercise agency and then assume nature can exercise a similar type of agency. Advocates of design should be trained to spot Berra’s Blunder in evolutionary literature, such as the succession of airplanes within Bejan’s “The Evolution of Airplanes” paper. Once the blunder is spotted, just calling it Berra’s Blunder summarizes the discussion.5

Darwin set the stage for his followers to make Berra’s Blunder. It flows from the circular mental picture depicted in his writings. For him it was self-evident that common descent explains similar features. Darwin concludes, “The similar framework of bones in the hand of a man, wing of a bat, fin of the porpoise, and leg of the horse…and innumerable other such facts, at once explain themselves on the theory of descent with slow and slight successive modification.”6 Circular arguments are naturally self-certifying. Thus, common ancestry explains similar features, and similar features explain common ancestry. This is an axiom in evolutionary biology, an obvious truth to be assumed and used as a general explanation. Apparently, it does not need experimental validation.

Accordingly, Bejan truly does expose that “the biology argument for evolution [is] at a disadvantage” since “evolution is largely a mental construct built on imagination.”1 This is no trivial observation. Bejan, like Berra, shows how their successions have no real observable intermediates. They are only conceptual. Fertile imagination, not evidence, fills the gaps. Conceptual intermediates join other major evolutionary presumptions like co-evolution, co-option, nature exercising agency, and convergent evolution. None of these flow from observations of discernable causes but are actually declarations built on mental pictures. One must ask: How much of the evolutionary scenario exists only in an evolutionist’s mind rather than reality?

Why does this problem of unbridled imagination persist? Evolutionary authority Stephen Jay Gould said that a “pillar” of evolutionary thought is extrapolationism, or scope. Evolutionists explain “large-scale results by extrapolation from short-term processes…[and] extrapolation to longer times and effects of evolutionary changes actually observed in historic times (usually by analogy to domestication and horticulture).”7 Extrapolation, in the sense Gould identifies, is not the same as an inference. It always invokes imagination to project from the known to the unknown—it’s clearly speculation. Intervening time or distance is usually proportional to how much conjecture is summoned. The larger the gap, the more extrapolation and imagination are needed.

However, similar features linked with imagination are not enough to establish whether two or more distinct entities are closely, remotely, or totally unrelated in ancestry. Just comparing similar features—or even DNA—to determine related ancestry is virtually always an inference with a probability of being right ranging from high to essentially zero. True relationships are fact-based connections, like a line of connected birth certificates.

The good news is that it doesn’t take any imagination to see the flying performance of an airplane or the phenomenal capability of birds. Bejan wonderfully documents how flying animals “converge on the same design—the same scaling rules—as the evolution of human fliers [airplanes],” and “yet, airplanes obey allometric rules that unite them with birds and other animals.”8 The same principles of design that exploit natural properties enable flight in both airplanes and birds. That fact is clearly seen.

Human engineering can be pretty amazing. The far-superior aerial acrobatics capability of birds testifies to the engineering genius of the Lord Jesus Christ.9 Let’s learn to recognize both elegant design in nature and the massive blunders evolutionists use to explain it away.