What does it mean to be a dinosaur? Older generations understood dinosaurs as reptiles with hip structures that pointed their legs straight down, instead of out to the side to produce the sprawling waddle we see in crocodiles and lizards. Those old-timers probably never imagined that scientists would one day insist that dinosaurs grew feathers. Modern scientists seem to hold a broader, looser definition of dinosaurs, and a new fossil find has found its way into the often-blurred region between dinosaurs and birds. Was it really a dinosaur? 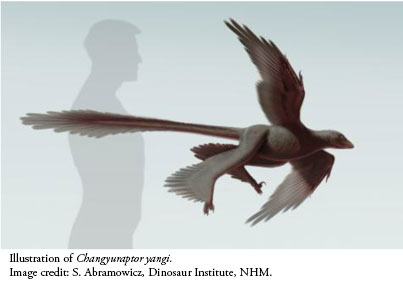 An international team of scientists described a new fossil in Nature Communications from Chinese sediments famous for their supposed feathered dinosaur specimens.1 Like a handful of previous finds, this new example apparently had four wings. Fossil impressions show flight feathers extending not only from the front wings of Changyuraptor yangi, but also from a pair of hind wings, making this the largest four-winged creature yet found in fossils.

It looks as though the unique creature could run, walk, or fly by using its dual-function hind limbs as either legs or wings. Now, evolutionary biologists are interested in fitting the creature's funny format into a dino-to-bird fable.

If this ancient creature really represents an evolutionary transition between dinosaurs and birds then details in its anatomy should look part-dinosaur and part-bird. For example, perhaps it should show feathery forelimbs that could not quite generate the lift required for flight. Ironically, however, the study authors insisted that Changyuraptor exemplified dino-to-bird transition, but on the other hand described it as a unique but fully functional flying creature.

They wrote, "Full sets of pennaceous [flight] feathers form extensive 'hindwings.'" Not only did the animal have a full set of feathers, but each feather was fully formed, not made of 'protofeather' fibers. The study authors also wrote, "They [symmetrical feathers] exhibit strong rachises and the vanes remain barbed throughout the length of the feathers."1

Changyuraptor had "a unique combination of traits" that worked and fit together as though it was purposefully designed. The study authors analyzed its long, feathered tail, noting that it could generate a significant part of the bird's aerial lift. The tail seemed well suited to steady the creature's flight while the wings made small adjustments in pitch. They called the creature "highly adaptive for controlling rapid descent," which is just an evolution-leaning way to say "highly specified for controlling rapid descent."1

Do these unique features fit evolution's expected transitions? Do these descriptions of wings, flight feathers and flight control dynamics sound even remotely dinosaurian? It doesn't seem so. Changyuraptor had the same kinds of features as birds.

Four-winged birds, complete with fully-formed feathers and appropriately proportioned tails might be called "dinosaurs" by those more committed to the belief that dinosaurs evolved into birds than they are committed to following the actual evidence.

Perhaps like the recent author who reverted back to calling a long-time bird a dinosaur after a second look at the evidence,2 these evolutionary researchers may one day regret having referred to Changyuraptor as a "four-winged dinosaur." Changyuraptor had none of the transitional features required to morph a real dinosaur into a bird. True, it was unlike any of today's familiar birds, but as the saying goes, if it quacks like a duck, has feathers like a duck, then it's probably a duck. In this case, bird wings and feathers don't make a dinosaur, but rather an exquisitely well-fashioned four-winged flying bird.

Humans Used Fire Earlier Than Believed
According to standard notions of human evolution, the controlled use of fire represented a key turning point in the development of modern humans from...
BY: BRIAN THOMAS, PH.D.

Another Failure to Recreate Life's Origins
A new study by NASA scientists has just been published where researchers did nothing more than convert a pre-cursor chemical into a single type of amino...
BY: JEFFREY P. TOMKINS, PH.D.