Do rocks and fossils hold clues that demand millions-of-years? Not the fossils from China's Daohugou beds. On the contrary, their clues speak to more recent origins.

Accessible from several outcrops northeast of Beijing, fossil hunters have been unpacking a trove over the last few decades, including some of the best-preserved insect and other arthropod fossils, as well as both familiar and unfamiliar vertebrate fossils.

When were they deposited? Authors of an extensive review of Daohugou vertebrate fossils, published in the Journal of Vertebrate Paleontology, wrote, "Following the discovery of this locality, conflicting opinions rapidly emerged as to the age and correlative relationships of the Daohugou strata."1

The study authors cited peer-reviewed reports that assigned Daohugou layers to Middle Jurassic, Upper Jurassic, and even Lower Cretaceous—a span of about 40 million years in conventional thinking. If these fossils contain clear clues about when they were deposited, then why would researchers propose these conflicting opinions on their ages?

The main technique used to assign ages to these layers involves correlating similar-looking fossils. It works on the assumption that the fossilized creature that is used to date the layer in which it is found lived during a particular evolutionary time frame. In other words, the method assumes millions of years of evolution before any dating assignments are even attempted. It also assumes that similar fossils found elsewhere are of the same evolutionary age, even if they are on separate continents.

However, many Daohugou fossils span multiple layers. Thus, the same creature survived unchanged for millions of years—assuming each layer represents such vast time spans—erasing these fossils' usefulness as time indexes.

The study authors may have unwittingly made this point when they admitted that certain fossils "might be expected to persist for considerable spans of geologic time."2 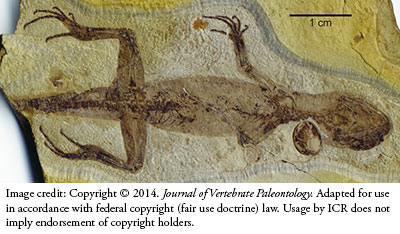 But couldn't this logic explain away any fossil-based age assignment?

This admission should nullify the whole method, since any index fossil might have lived before or after its fossil occurrence, but researchers insist on moving forward, selecting arguments and fossils that best fit their preconceptions.

In another example from the same report, the team described how certain plant and insect fossils correlated with the wrong layers. They wrote, "However, even brief survival of some plant and invertebrate taxa regarded as Middle Jurassic index fossils into the Late Jurassic in northeast China would be sufficient to resolve this apparent contradiction."1

In this case, the authors "solved" the contradiction by imagining—without fossil evidence—that ancient creatures failed to evolve for millions of years. Dating fossils with fossils seems quite subjective.

Their report has several more examples of fossil finagling. Its authors seem to struggle to force the evidence into an evolutionary time scheme, such as a salamander fossil (which the Daohugou beds are famous for) called Liaoxitriton. According to the Journal, this fossil looks like the "modern salamander clade Hynobiidae." If very little change has occurred between the fossil and its living counterpart, then it also stands to reason that very little time has elapsed since the day it was fossilized.

Thus, "The presence of Liaoxitritonat both Daohugou and the [supposedly millions of years younger] Yixian Formation locality of Shuikouzi implies that these sites must be reasonably close in age, unless Liaoxitritonis a rather long lived genus."1

Do the problems that secular researchers encounter when assigning ages to fossils stem from a lack of clear clues, or from the faulty reasoning inherent in the method itself?

Apparently, evolutionary thinking blinds its proponents from even considering clues that confound their worldview, like original tissues still inside un-mineralized fossils. The Journal of Vertebrate Paleontology report's press release even displays a Daohugou feathered bird's original bone material and soft tissues that reflect UV light differently than the surrounding mudrock.3 The idea that such biological material—portions of intact soft tissue—can last for even one million years, let alone 160 million, stretches credulity way past the breaking point.4 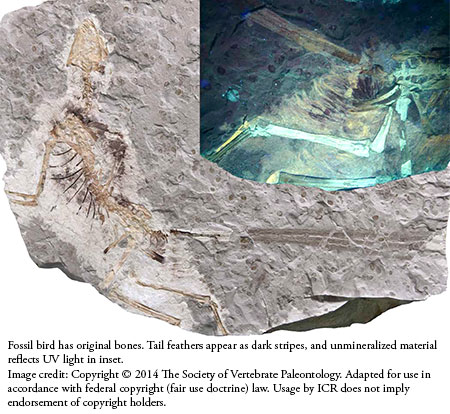 Do the fossil plants, insects, salmanders, birds, mammals—including one that resembles a flying squirrel and another that resembles an otter with a scaly tail—and other reptiles like pterosaurs and dinosaurs in the Daohugou sediments require millions of years to form? Not at all. They make much better sense as deposits from Noah's Flood. Clearly, some muddy calamity swallowed all these different creatures and preserved them together—a feat that everyday processes simply don't perform.

In this context, a rock layer does not represent "a window on life," as the Society of Vertebrate Paleontology's press report said, but instead a window on death by watery cataclysm.3

Image credit: Copyright © 2014 The Society of Vertebrate Paleontology. Adapted for use in accordance with federal copyright (fair use doctrine) law. Usage by ICR does not imply endorsement of copyright holders.