Secular scientists used to regard the planetary collision theory as a triumph in explaining several of the moon's specific arrangements. But newfound facts severely debilitate this lunar impact origins theory.

According to this new theory, an early Earth collided at a glancing angle with a planet that was one or two times the mass of Mars. Some of the debris launched into orbit around Earth and somehow collected to form the moon. This could explain the moon's peculiar orbit and some of its other properties.1 But, as Bob Jones University astronomy professor Ron Samec noted, recent studies refute even this origins scenario.2 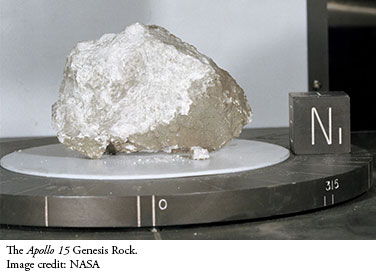 For example, ratios of rare titanium forms in moon rocks were identical to those found on Earth. This implies that the supposed impacter did not contribute its material to the moon after all.3

An increasing number of computer simulations have revealed additional flaws in this planetary collision model. Science journalist Daniel Clery recently wrote in Science, "As a result, researchers are casting around for new explanations. At a meeting at the Royal Society in London last month—the first devoted to moon formation in 15 years—experts reviewed the evidence. They ended the meeting in an even deeper impasse than before, as several proposed solutions to the moon puzzle were found wanting."1

California Institute of Technology's David Stevenson, who helped organize the Royal Society event, said, "It's got people thinking about the direction we need to go to find a story that makes sense," according to Science.1

In a recent article published in the technical Journal of Creation, Bob Jones' Samec summarized reasons why three older naturalistic lunar origins stories had failed—reasons that would have compelled secular astronomers to warmly greet the newer impact theory.2

The first story—one invented by Charles Darwin's second son George—held that dense, sinking matter increased the early earth's rotation speed so fast that it threw off material from the Pacific Ocean basin. It later cooled to become the moon. Samec wrote, "The problem with this is that the initial spin or angular momentum is not conserved in the present earth-moon system."2

A replacement moon origins story told how Earth's gravity somehow "captured" a large object that would become the moon as it was flying nearby. Even the secular community now agrees that this is not the answer. Samec commented, "One major problem with this idea is that capture is an extremely rare event."2 Also, such a capture would have produced a highly elliptical lunar orbit, not the nearly circular one it actually has.

A third story tells of gas condensing in eddies to form Earth and its moon. But if this were true, then "the moon's orbital plane and earth's equator should coincide."2 But they don't. Earth is tilted to 23.5 degrees relative to its orbital plane, and the moon's orbit is inclined only about five degrees.

And now, titanium measurements and new computer models deal the glancing-blow theory a direct hit. But one theory still accommodates all the data. If God created the moon in a supernatural event, then that would explain its many specifications directly related to life on Earth, including its peculiar size, mass, orbit, angular momentum, composition, and density. This evidence confirms God's Word, which says, "God made two great lights: the greater light to rule the day, and the lesser light to rule the night.…And God saw that it was good."4

Common-sense inferences, not only from failed hypotheses, but also from straightforward observations, continue to confirm the moon's supernatural origin.