A recent study indicates that only 37 percent of Americans believe God created human beings in the very recent past—essentially as described in the Bible.1 Another 25 percent believe humans evolved over millions of years, but the process was somehow guided by the hand of God. The sum of these two figures shows that 62 percent of Americans believe that God—in some fashion—created mankind. 17 percent of survey respondents answered "not sure." 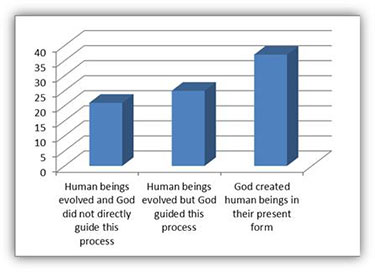 However, 21 percent of Americans believe humans evolved over eons of time with no God in the picture. While that figure may seem rather low, it has actually grown since 2008, when those believing in a Godless evolution stood at only 15 percent. And in 2004 it was only 13 percent.

It appears that the trend will continue to grow, since almost a third, 31 percent, of people in the 18 to 29 year-old group believe humans evolved from lower forms of life without God's intervention.

This growing disbelief in any form of creation may reflect decades of successful indoctrination tactics such as those used in evolution-soaked classroom settings. After all, a 1998 poll confirmed that 72 percent of "greater" U.S. scientists do not believe in God—an increase of only four percentage points from 1933.2 Is the trickle-down effect of decades of anti-God instructors bearing fruit of unbelief among younger segments of the U.S. population? Secular religious views, with their accompanying Godless tales of human origins, purpose, and destiny, have somehow gained traction without the support of sound reason or substantive evidence.

Other details from the study, posted on yougov.com, reveal potential opportunities.3 The highest percentage of "not sure" respondents, 19 percent, also came from the seemingly skeptical 18 to 29 year-old group. This indicates a possible willingness to listen to both sides of the argument. Also, many Jewish, Muslim and Buddhist responders were "not sure," coming in at 32, 36 and 40 percent respectively.

This trend toward secularism reflects an urgency to reach people—especially the younger generation—with the message of creation. One side of the coin suggests urgency, and the other side, opportunity.