Being the first ever to examine a dinosaur fossil long buried in sedimentary rock is thrilling enough for a field researcher. But a team working in Canada found an exhilarating bonus on a hadrosaur fossil fragment—it had actual skin still attached. 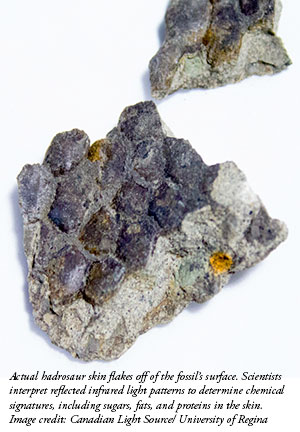 They found the duck-bill dinosaur fossil near Grand Prairie, Alberta. University of Regina physicist Mauricio Barbi operates state-of-the art synchrotron equipment that can detect and identify chemical signatures without destroying samples. He plans to use the technology to investigate the special fossil and its skin. He told Canadian Light Source (CLS), which houses the synchrotron device, "As we excavated the fossil, I thought that we were looking at a skin impression. Then I noticed a piece came off and I realized this is not ordinary—this is real skin."1

What do they plan to do with this "real skin?" Barbi said, "Everyone involved with the excavation was incredibly excited and we started discussing research projects right away."1 Each project will examine a different question. For example, they plan to sort out what color the dinosaur skin may have been by investigating the skin’s pigment-containing melanosomes. Researchers in China performed a similar analysis on a Sinosauropteryx dinosaur in 2010.2

Which research question carries the most mystery? "But perhaps the greatest question Barbi is trying to answer at the CLS is how the fossil remained intact for around 70-million years." Barbi declared, "There is something special about this fossil and the area where it was found, and I am going to find out what it is."1

Special indeed. But finding the right answer works best by first asking the right question, and focusing on some special quality "about this fossil" that enabled it to persist "for around 70-million years" does not appear to be the right question. That line of research will leapfrog a far more fundamental and relevant mystery: How long could actual dinosaur skin tissue possibly last?

Who, upon entering a room and encountering a burning candle would immediately begin to wonder what special something about that candle enabled it to continually burn for a million years? Would it not make more sense to first question how long such a candle could potentially burn before going out?

Similarly, questions that assume some special factor in the skin or in the earth could preserve original organic dinosaur remains for even one million years ignore what is already widely known about skin protein decay. A candle’s flame can be extinguished and relit, but skin decays continually and relentlessly until it is completely gone, becoming dust in thousands, not millions of years. The research questions so far proposed typically exclude the very best explanation—these fossils look young because they are young.