"Curiouser and curiouser!" cried Alice (she was so much surprised, that for the moment she quite forgot how to speak good English).... "Oh dear, what nonsense I'm talking!"1

For the time will come when they will not endure sound doctrine; but after their own lusts shall they heap to themselves teachers, having itching ears; And they shall turn away their ears from the truth, and shall be turned unto fables.2

Both of these widely separated quotes deal with the same issue. Sometimes, folks just cannot (or will not) see truth. The wonder is not that some get caught up in lies, confidence scams, news "spin," or outright efforts to deceive. The wonder is that those who claim to be the people of God--those who have been given "the mind of Christ"3--can be taken in by such "nonsense." Paul's warning to Timothy, after urging him to "preach the word," was that such would be the case, however, as time continued on.

Over the past year or so, there has been a coalescing of several independent groups that have combined their talent and notoriety to capture the intellectual ascent and theological agreement among evangelicals that "creation" certainly does not have to be recent. Nor, in their estimation, did it have to occur during six "normal" days as is indicated by the words of Scripture, but rather can be understood to mean "natural development over time"--as has been "proven" by modern science.

Their arguments are not new. Theistic evolution has been taught in one form or another for 150 years. The so-called "day age" interpretation of Genesis is equally long-lived, and various harmony theories have been propagated, such as the gap theory, progressive creation, and the more recent "creation by evolution" postulated by Bruce Waltke.4

The organization that has risen to be the "umbrella" under which most of these various proponents gather is the BioLogos Foundation, founded by Francis Collins and funded by the Templeton Foundation. Under the leadership of President Darrel Falk, BioLogos has co-sponsored a new initiative called The Vibrant Dance of Faith & Science, whose stated mission is to:

…inspire, educate, and unify pastors, scientists, Christian leaders, and concerned lay people, as well as seekers and skeptics, with the growing congruence of scientific discovery with our Christian faith and to explore the implications and applications of that congruence.5

This "series of symposia and online resources" is led by a number of well-known speakers from Reasons to Believe, BioLogos, Discovery Institute, and several eminent universities and world-renowned churches that espouse a harmony of naturalistic science with the biblical text.

More than ever before, recent scientific discovery is both confirming and illuminating our Christian faith. From progressive-creationism to theistic-evolution, there is a wide spectrum of interpretations of both science and the fact-and-mode of God's creative activity. Informed, non-confrontational discourse will be a key to furthering the gospel of Christ.6

The men and women who are heading and leading these efforts "by good words and fair speeches deceive the hearts" (Romans 16:18). Some, perhaps, have been themselves deceived by those "good words," but all of them--all--are superimposing the words of "scientific" men (most of whom are open atheists) over the inspired words of God. I grieve for them. I grieve for the ones who will be led astray by the "fair speeches" of those who at the very least are looking for the "praise of men more than the praise of God" (John 12:43).

It is worthy of note that the Bible lists several key characteristics by which the sincere believer may identify those who are seeking to distort the truth of the Scriptures. Permit me to remind the reader of the basics.

-- Denigrate the actions of God toward man. ("For God doth know that in the day ye eat thereof, then your eyes shall be opened, and ye shall be as gods, knowing good and evil.")

The Bible's text is amply clear. The creation account is written so precisely that one must both insert words and override clear meanings of words to make the passage say anything other than a six-"ordinary"-day creation, making, and organizing of the cosmos. Not only is Genesis clear, but the many, many such references and verification throughout the biblical text support, amplify, verify, and demand adherence to what God has done. It is simply wrong to disavow what the words teach.

I have come to personally know many of the proponents of the "other" side. And while I do not (and have no authority to) question their salvation, I certainly question their motivations and conclusions. The most common answer that I get when I ask "why?" is "well, science has proven that the earth and the universe are billions of years old, so we must interpret the Bible in the light of science."

Perhaps one might consider the rest of what these scientists propose and where such arbitrary discarding of the clear text of Scripture might lead, before so glibly endorsing the "doctrines of men."7 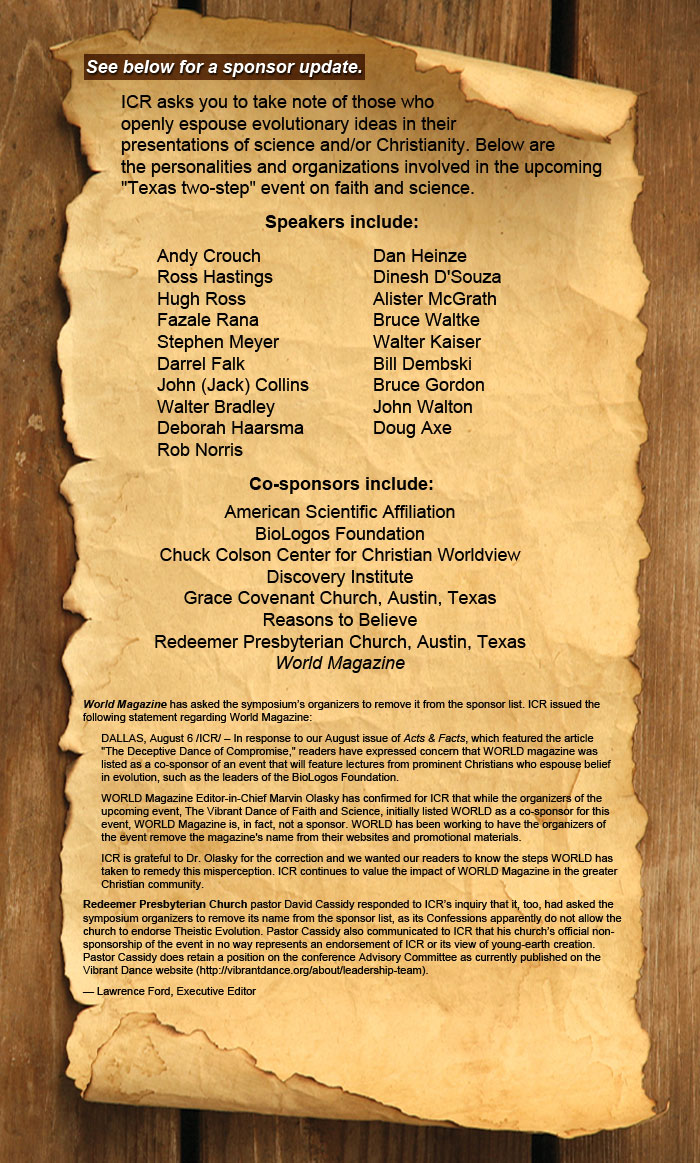