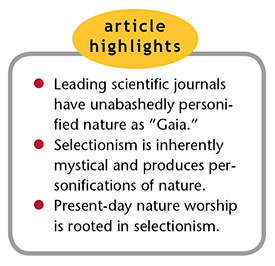 Organisms have many systems that work together for a purpose. For example, your heart and associated circulatory system fulfill life-sustaining functions. Human experience tells us that intentional results always indicate the actions of a volitional agent, and the Bible affirms that nature’s creative engineer is the Lord Jesus Christ.

Yet, most evolutionists would not see circulatory systems as intentionally designed by God. They interpret natural phenomena through their anti-design worldview of selectionism, which envisions a substitute agent that selects for the “fittest” characteristics over time. Thus, what creationists perceive as purpose is to selectionists the unforeseen outcome of a natural selective process.

Selectionists have replaced God with nature as the volitional, creative agent behind this intricate complexity. Remarkably, the Bible predicts that exact exchange. This article will examine one selectionist hypothesis about the origin of the tight interdependencies between creatures that look purposefully designed.

Romans 1 describes the religious practices of people who don’t credit God as the Creator. An exposition of the Greek words in verse 25 reveals what they do:

Who exchanged the truth about God for a lie (or “exchanged the true God for the false god”1), not only falling into adoration of but also reverentially serving the created material realm of nature, contrary to the Creator, who is praised (by His handiwork in creation) endlessly. Amen.2

In short, people will either believe that God creates nature or that nature creates itself. The projection of God-like powers onto nature is increasingly prominent in scientific literature, with some scientists personifying nature as “Gaia.” Publishing in Science, University of Exeter evolutionary ecologist Tim Lenton and French sociologist Bruno Latour laud nature’s cognitive powers in “Gaia 2.0.”3 This paper highlights how modern evolutionists can be deeply religious—but revering nature rather than God.

This particular portrayal of nature is named after the mythological goddess Gaia, venerated by ancient Greeks as the personification of Earth.

The Gaia hypothesis—first articulated by James Lovelock and Lynn Margulis in the 1970s—holds that Earth’s physical and biological processes are inextricably connected to form a self-regulating, essentially sentient, system.4

[Lovelock] argued that the Earth regulates itself, and responds to change, in the same sort of way that a single living organism does. The Earth acts to keep itself alive….Gaia seeks, through a mechanism of self-regulation of the sort exhibited by organisms, to maintain factors like temperature and oxygen in states that are favourable to itself, the living Earth….The strongest statements of the hypothesis hold that the Earth really is a living organism.5

In sum, Gaia is a sentient, living planet exercising intrinsic agency that “acts to” stay alive and “seeks” ways to attain favorable conditions. Tim Lenton doesn’t write about Gaia as a theoretical framework. Gaia is something that just is, and within it everything on Earth is connected and functions. Lenton visualizes humans consciously interacting with Gaia. Because he feels humans are one with Gaia, they fundamentally change Gaia as they change themselves. Thus, he believes that “making such conscious choices to operate within Gaia constitutes a fundamental new state of Gaia, which we call Gaia 2.0.”3

Lenton embodies nature with volition and wisdom by contrasting the way human machines consume resources with what Gaia does:

An audit made by Gaia would question the purported quality of many [human] innovations....Compared to Gaia, this is a very poorly coupled and unsustainable set of inventions. This does not mean that humans should stop inventing, but rather that engineering should shift attention to become as smart as Gaia.”3

Evolutionary theorist W. Ford Doolittle’s recent article “Making Evolutionary Sense of Gaia” is no less imaginative.6 He develops two connections between selectionism and Gaia. First, he suggests that diverse creatures in close association constitute an individual organism, thus exploiting the vivid imagination evolutionists use to visualize such things as a four-legged land animal morphing into a whale. Godfrey-Smith agrees that this approach works “once the concept of an organism is loosened up.”5 That “individual” is combined with other multi-organism individuals into a new ecosystem-level individual. Doolittle eventually dreams that all of Earth’s living creatures are absorbed into a collective “individuality of life” that is Gaia.

But is Gaia any more operative than a rabbit’s foot or the Canaanite god Baal? Their power to effect change exists solely in the minds of those who project volitional powers onto them. Gaia is just a superstitious personification of nature that masquerades as science.

This is true of any theory that slips an alternative pseudo-agency into the operation of nature in order to avoid God as the originator of biological functions that clearly look like they were purposefully designed. That’s why Darwin was heralded for his great feat of eliminating any need of God’s selective agency. He did this by invoking a totally materialist mechanism he called natural selection.

But Darwin didn’t discover the secret passage around pseudo-agency. Rather, he cleverly cloaked the agency within an analogy that few people recognize as illegitimate. But two prominent atheists, bothered by Darwin’s duplicity, pull back the curtain:

Familiar claims to the contrary notwithstanding, Darwin didn’t manage to get mental causes out of his account of how evolution works. He just hid them in the unexamined analogy between selection by breeding and natural selection.7

Simply put, human breeders have minds that can make real selections and nature doesn’t—though selectionists treat it like it does.

How Selectionism Produces Personifications of Nature

Darwin reintroduced veneration of nature back into science through selectionism.8 Both atheistic and theistic selectionists embrace the view that environments can exercise agency in molding the diversity of life. This inherently mystical pseudo-agency animates all Darwinian explanations and, as we saw, is essential to superstitious Gaia beliefs.

Selectionism begins with the projection of volitional selective capacity onto nature to do something like “favor” or “weed out” organisms. Scientists should find this unsettling. While some religious practitioners ascribe volition to inanimate things, how can selection ever legitimately be applied scientifically to an immaterial concept or to mindless entities? As intelligent design advocate William Dembski observed:

Before Darwin, the ability to choose was largely confined to designing intelligences, that is, to conscious agents that could reflect deliberatively on the possible consequences of their choices.9

No one would easily or inadvertently slip into talking of nature as a realm where anything like selection was located; and, indeed, we find few authors before Darwin making that transition.10

One source of trouble was that Darwin liked the term “natural selection” because it could be “used as a substantive [a mental concept] governing a verb” (F. Darwin, 1887, vol. 3, p. 46). But such uses appeared to reify, even to deify, natural selection as an agent.10

The pithy statement “used as a substantive governing a verb” is very important to both Christians and scientists. Christians should recognize how humans can deify material things or even imaginary thoughts exactly through this formulation—conceiving of them as volitional agents that govern a verb (e.g., “Baal acts”).

This practice also threatens science. Selectionists who believe in Gaia are predisposed to envision Gaia “acting to” stay alive. Why? Because just like Darwin, they “use a substantive [Gaia] to govern a verb [acts].” Theistic selectionists use the same formulation when they say things like “natural selection cannot see most mutations” or “the only thing natural selection can do is…” Evolutionist Stephen Talbott, seeking to extricate the theory from the mysticism of selectionism, objected that “natural selection becomes rather like an occult Power of the pre-scientific age.”11

Recently, Talbott went into great detail to reveal why Darwin’s selectionism didn’t deliver biology from bondage to religious superstition. He identifies why no substitute word for “selection” would enable selectionists to employ natural selection as a mystical supervising agent in their explanations. He said:

Natural selection is always doing things….We learn that natural selection shapes the bodies and behaviors of organisms, builds specific features, targets or acts on particular genomic regions, favors or disfavors (or even punishes) various traits….This sort of language is all but universal. I think it is safe to say that relatively few references to natural selection by biologists fail to assert or imply that we are looking at something like a humanly contrived mechanism with the well-designed power to do things, beginning with the activity of selecting….Some evolutionists are uncomfortably aware that their use of a phrase intentionally evoking the breeder’s “artificial selection” invites mystical belief in a breeder-like agent supervising adaptive evolution. And so they assure us that “natural selection”, despite its explicit suggestion of a selecting agent, is “just a metaphor”….But it is hard to see this as anything but subterfuge. There is a reason why no effective verbal alternative to the painfully tendentious “selection” has taken hold. The idea of a selecting power is deeply rooted and seemingly ineradicable from the modern biologist’s thinking about evolution.12

Why would leading scientific journals give Gaia—an unabashed personification of nature—credibility other than to reinforce the inherently mystical selectionist worldview common among academics? Since, as Talbott observes, evolutionists are trapped in their selectionist worldview, if they replace Gaia we should expect another superstitious hypothesis.

Romans 1:25 said the false god is viewing nature as self-creative—and now we see how selectionism facilitates this. Like Doolittle, some evolutionists further imagine Earth, moon, stars, galaxies, etc. like a massive organism “acted on” by “cosmic natural selection,”13 meaning that “the universe could be further understood as a self-coherent and self-creating whole, without the need for anything outside itself to give it law, meaning or complexity.”14

The Bible can read human behavior perfectly—even atheists like Carl Sagan who add “reverence and awe” to nature:

A religion old or new, that stressed the magnificence of the universe as revealed by modern science, might be able to draw forth reserves of reverence and awe hardly tapped by the conventional faiths. Sooner or later such a religion will emerge.15

It seems such a religion has emerged. As Romans 1 predicted, it’s “not only falling into adoration of but also reverentially serving the created material realm of nature, contrary to the Creator.”2 The Bible gets it right every time.