I am not ashamed, for I know whom I have believed and am persuaded that He is able to keep what I have committed to Him until that Day. (2 Timothy 1:12) 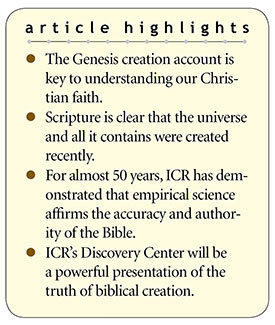 The Institute for Creation Research was founded almost 50 years ago to encourage Christians to get “back to Genesis.” The account of special creation and early human history recorded in the Bible’s first book is foundational to an understanding of the Christian faith, and we work to equip believers with evidence of the Bible’s accuracy and authority.

The account of special creation and early human history recorded in the Bible’s first book is foundational to an understanding of the Christian faith.

That message has not always been welcome. Recently I was reminded that some within the broader creationist movement think ICR is an embarrassment because of our strong stand on the inerrancy of the Bible—particularly our insistence that a plain reading of the words of Scripture clearly indicates a recent creation. Apparently this is keenly felt within the academic and scientific community since “everyone knows” science has proved the earth to be billions of years old.

Some within these communities may feel that if they present the evidence against evolution in any way that connects their presentation to a personal, omniscient, omnipotent Creator who spoke the universe into existence just a few thousand years ago, that evidence would be dismissed out of hand because it would be seen as an embarrassingly “simple” belief in the Bible. But if the origins question is between evolution and creation, can one really leave God and what He has explicitly revealed out of the picture?

There is no doubt that the more one sides with the clear message of Scripture, the less the broader secular world will tolerate it. This teaching is so prevalent in Scripture it hardly needs a reminder. Jesus said, “If you were of the world, the world would love its own. Yet because you are not of the world, but I chose you out of the world, therefore the world hates you” (John 15:19). The more one identifies with the person, work, and teaching of the Lord Jesus, the more confidence one can have that He will identify with us. “Therefore whoever confesses Me before men, him I will also confess before My Father who is in heaven. But whoever denies Me before men, him I will also deny before My Father who is in heaven” (Matthew 10:32-33).

There are a number of pillars on which ICR stands and on which we will not waver.

We Affirm That Jesus Christ Is the Creator

John 1:1-4, Colossians 1:16-17, Hebrews 1:1-3, among many other passages throughout the Old and New Testaments, are more than sufficient to identify the “Word made flesh” as the second Person of the Godhead through whom God “made the worlds.” From the declaration of the Ten Commandments through the stunning passages in the book of Revelation, God makes it clear that He is “the LORD, that is My name: and my glory I will not give to another” (Isaiah 42:8). We who are privileged to live in the New Testament last days are commanded “whether you eat or drink, or whatever you do, do all to the glory of God” (1 Corinthians 10:31). ICR will always publicly honor the Lord Jesus Christ as the Creator.

ICR will always publicly honor the Lord Jesus Christ as the Creator.

We Uphold the Scriptures as the Written Word of God

“I will worship toward Your holy temple, and praise Your name for Your lovingkindness and Your truth; for You have magnified Your word above all Your name” (Psalm 138:2). “For whoever is ashamed of Me and My words in this adulterous and sinful generation, of him the Son of Man also will be ashamed when He comes in the glory of His Father with the holy angels” (Mark 8:38). Those two passages alone should cause every child of God to delight in declaring the writings of Scripture to be “profitable for doctrine, for reproof, for correction, for instruction in righteousness, that the man of God may be complete, thoroughly equipped for every good work”
(2 Timothy 3:16-17).

ICR often states in its publications, public seminars, and resources that we are privileged to use empirical science to affirm the accuracy and authority of the written Word of God.

We Hold That the Creation of the Universe Was Recent

It should be obvious to anyone aware of the creation debate that the age of Earth is a touchy subject. This is simply because the evolutionary argument cannot stand without unmeasurable and unimaginable eons in which to set the story that random chance interaction among molecules could produce the stunningly complex and absolutely beautiful design we see all around us. Furthermore, if there were eons of death and destruction prior to Adam’s sin (Romans 5:12), then the entire gospel message is swept into the black hole of allegory and symbolism.

No, the text of Scripture is clear. The week of creation took place during six normal 24-hour days. God rested on the seventh day and insisted that we remember that seventh day because God “worked” for six days and rested on the seventh (Exodus 20:11). ICR will always present the evidence for a recent creation. “Indeed, let God be true but every man a liar. As it is written: ‘That You may be justified in Your words, and may overcome when You are judged’” (Romans 3:4).

We are privileged to use empirical science to affirm the accuracy and authority of the written Word of God.

We Seek to Demonstrate That Empirical Science Affirms a Recent Creation

While it seems acceptable in some creation circles to insist that ICR does not do “real” science and/or that ICR scientists are rejects from serious science schools, that is far from the truth. Each of our Research Associates have earned masters or PhDs from well-known universities, and many have worked in laboratories or taught at the college level prior to coming to work for ICR. All of their biographies are available on our website, and their credentials are excellent. Several members of our science team have worked in the secular world long enough to have their papers published in peer-reviewed journals relevant to their disciplines. But because of ICR’s open stand that empirical science affirms the biblical text, it is almost impossible to get their current papers published in secular journals whose editors reject anything that comes from ICR.

That annoying and sometimes frustrating limitation is beside the point. ICR does not answer to the secular journal editors, nor are we burdened that we are not receiving praise from an atheistic-inclined academic community. Jesus Himself felt that rejection from among some of those who should have embraced His ministry: “Nevertheless even among the rulers many believed in Him, but because of the Pharisees they did not confess Him, lest they should be put out of the synagogue; for they loved the praise of men more than the praise of God” (John 12:42-43). ICR ultimately answers to the Lord whom we serve and secondarily to those of our supporters who faithfully give so that this ministry can continue.

We Partner with Fellow Believers to Present God’s Creation Truth

When it became clear that the time was right to build the ICR Discovery Center for Science and Earth History, we knew at the outset that the costs would exceed any normal capital project we had ever attempted. ICR has not used debt or leveraged credit. It was our founder’s position that if ICR’s leadership was carefully following the Lord’s leading in its decisions for the future, the funds would be forthcoming as we made those decisions known to those among whom we ministered. That has certainly been the case thus far.

Now that we are nearing the final stages of construction, all of us have been honored by the $20 million “extra” dollars that have been supplied for the project by the Lord’s people. The remaining $8 million seems like a small amount compared to the whole, but that money must come from those who are aware of what ICR is doing and are willing to invest the resources the Lord has provided them in the work ICR is uniquely qualified to accomplish.

This discovery center may “embarrass” the secular world, and perhaps some of those within the creationist community who want the praise of men rather than that of their Lord, but I can assure you ICR’s stand on God’s truth will benefit the thousands of visitors and guests who will find the world-class planetarium and the stunning exhibit halls a source of delight, a wealth of accurate science, and a wonderful testimony to the glorious gospel of Christ.