Although evolutionary scientists insist there is no evidence for the global, Earth-destroying Flood described in Genesis, accepting the Genesis Flood as literal history enables researchers to make sense of a wide array of geological, climatic, and cultural data.

Most of Earth’s land surface is covered with sedimentary rocks or sediments, which are formed when pre-existing rock material is weathered. The resulting sediment is then transported to another location by water, wind, or glacial action. Even secular geologists acknowledge that nearly all the world’s sedimentary rocks are water-deposited, although they would deny that these rocks were the result of the Genesis Flood.1 Furthermore, some of the sedimentary rocks that secular geologists attribute to wind action are better explained as resulting from water currents.2

Within these water-deposited sedimentary rocks are the fossilized remains of billions of plants and animals. These fossils are evidence of rapid burial since organisms that are not buried rapidly will quickly decay or be eaten by scavengers. The fossils are often found in mass graveyards, and marine and land creatures are frequently buried together.3 This is exactly what one would expect from the catastrophic global Flood described in the Bible.

People groups all over the world have recollections of a great flood that nearly destroyed the human race. ICR President Emeritus Dr. John Morris has personally collected more than 200 such flood stories, many of which bear remarkable similarities to the Genesis account.4 If the Flood was a real event, then it would surely have been remembered by those who lived through it—Noah’s family—and told to their descendants. 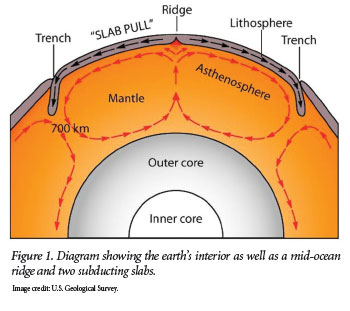 The Flood also enables us to make sense of clues contained within Earth’s interior. Our planet can be divided into a thin outer crust, a core at its center, and the mantle between them (Figure 1). The core is comprised of a solid inner core and a liquid outer core. The uppermost part of the mantle and the crust together comprise the lithosphere, about 60 miles thick. Like a cracked eggshell, the lithosphere is divided into seven or eight large plates and many smaller plates.

Creation geophysicist John Baumgardner—described as “the world’s pre-eminent expert in the design of computer models for geophysical convection”5—has spent many years studying the connection between plate tectonics and the Flood. Today, the plates are moving very slowly, at rates of just a few centimeters per year, but Dr. Baumgardner argues that they moved much faster in the recent past.6

When an oceanic plate and a continental plate collide, the denser rocks of the ocean floor tend to slide under the less-dense continental rocks, a process called subduction. As a subducting plate moves down through the mantle, the resulting friction heats the surrounding material. This heating reduces the viscosity of the material, enabling the subducting plate to move more quickly. As long as the heat is carried away by the surrounding mantle rocks faster than it is generated by the subducting slab, subduction will be slow and gradual. If, however, the generated heat is not carried away at a sufficient rate, the viscosity of the slab decreases still further, enabling the slab to descend even faster. This results in an effect called runaway subduction in which the subducting slab moves at speeds of meters per second rather than centimeters per year!6 Fortunately, conditions for runaway subduction are not currently present in the mantle, but there are good reasons to think such conditions occurred in the past. 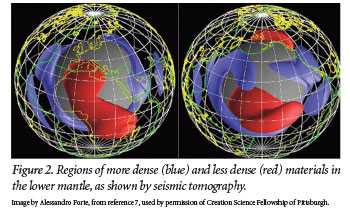 An imaging process called seismic tomography has revealed a ring of dense rock at the bottom of the mantle. Since its location corresponds approximately to the perimeter of the Pacific Ocean, it appears to represent subducted ocean crust (Figure 2). Located inside this ring of cold rock is a blob of less-dense rock that appears to have been squeezed upward toward the crust. If one assumes that the density of the cold ring is comparable to that of the surrounding material, which is the most straightforward assumption, this ring is 3,000 to 4,000 °C colder than the inner blob. This is completely unexpected in the conventional plate tectonic model since it can take about 100 million years for a slab to descend all the way to the base of the mantle. In that time, one would expect any such temperature differences to have evened out. However, in the catastrophic plate tectonics model, such a temperature difference is to be expected if the slab rapidly subducted into the mantle just a few thousand years ago.7

If runaway subduction did occur, then certain things logically follow. Since one expects Earth’s volume to remain constant during the subduction process, rapid subduction and the destruction of the old seafloor also imply rapid creation of a new seafloor. This would occur at the mid-ocean ridges, where hot magma rises upward (Figure 1). The lithosphere above the ridge would stretch and thin, allowing the magma to break through the crust. Dr. Baumgardner thinks the mid-ocean ridges, which encircle Earth like seams on a baseball, were the result. As this hot magma came into contact with cold seawater, the result would have been a long, linear geyser that ejected huge amounts of superheated water into the atmosphere. This may have been the source of the intense rains that fell for 40 days and 40 nights (Genesis 7:12). 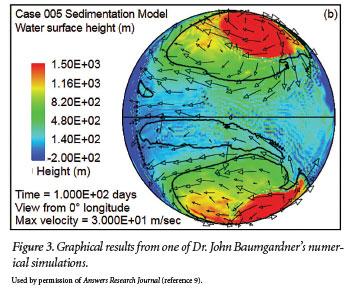 Furthermore, this upward motion of less-dense material at the mid-ocean ridges would have temporarily raised the ocean floor along these underwater belts, displacing massive amounts of seawater onto the continents and resulting in catastrophic flooding on a global scale. This is exactly what one would expect during the global Flood. Dr. Baumgardner has written sophisticated computer programs to model both the rapid plate motions and the transportation of sediments by water currents during the Flood (Figure 3).8,9

Molten lava, or magma, contains minerals whose magnetic domains tend to align with the direction of Earth’s magnetic field. When the rock cools and hardens, this alignment is “locked” into the volcanic rock. The basaltic rocks on either side of the mid-ocean ridges depict a striped pattern consisting of alternating bands of magnetization that reverse direction as one moves away from the ridge. This striped pattern indicates that Earth’s magnetic field has flipped dozens of times, with the north and south magnetic poles trading places.

If a new seafloor rapidly formed during the Genesis Flood, then the fact that these magnetic reversals are recorded in oceanic volcanic rocks (most of which were formed during the Flood) implies that the magnetic reversals must also have occurred rapidly. Uniformitarian scientists found strong evidence for rapid magnetic reversals, although such rapid reversals are very hard for them to explain.10-12 Creation physicist D. Russell Humphreys proposed a theory that at least qualitatively explains how such rapid reversals could occur.13 His mechanism requires strong up-and-down motions of fluids within Earth’s outer liquid core due to convection. Such convection might be initiated if a cold subducting plate were to come into contact with the outer core at the core-mantle boundary, which Dr. Baumgardner argues is exactly what happened.7

As the newly formed ocean floor cooled, its density increased and it sank, allowing the floodwaters to drain off the continents. The rapidly receding waters would have eroded away an enormous amount of sediment. In places where the sediments were relatively thin, the water would have eroded all the sedimentary layers, leaving the original basement rocks exposed. Huge volumes of fast-moving water would have planed some areas flat, resulting in so-called planation surfaces. Since they are not forming today, these surfaces are difficult for secular geologists to explain.14 This extensive erosion implies that huge amounts of sediment would have rapidly been dumped into the ocean basins. The Whopper Sand in the Gulf of Mexico—a complete surprise to uniformitarian scientists—is an example of this massive, sheet-like draining of North America.15

The Genesis Flood also provides a straightforward explanation for the Ice Age. The heat generated by the rapid formation of a completely new seafloor during the Flood would have significantly warmed the world’s oceans, dramatically increasing global evaporation. This would have put far more moisture into the atmosphere than we see today, resulting in greatly enhanced snowfall at high latitudes and on mountaintops. Late-Flood and residual post-Flood volcanic activity would have put great amounts of light-reflecting aerosols into the stratosphere, resulting in cooler summers that would have allowed thick ice sheets to persist and grow over hundreds of years. As the oceans cooled and volcanic activity diminished, the Ice Age would have gradually come to an end.16 In contrast, the currently popular secular ice age theory has serious problems.17

Accepting the Genesis Flood as literal history enables researchers to make sense of a huge array of data. Although creation scientists are still working to resolve unanswered questions, the creation-Flood model is much more robust and has much more explanatory power than secular Earth history stories. Skeptics “willfully are ignorant of” (2 Peter 3:5) the reality of the Genesis Flood—not because of a lack of evidence but because of an unwillingness to acknowledge God’s Lordship over their lives.