Dinosaurs continue to play an important role in science education, for few subjects command students' attention as well as dinosaurs do. Evolutionists shrewdly use them as a tool to teach evolutionary thinking, often employing the statement "millions of years ago, when dinosaurs ruled the earth...". Creationists often use them, too, for the Bible claims that "in six days the LORD made heaven and earth, the sea, and all that in them is" (Exodus 20:11), which necessarily includes the dinosaurs. If evolution is true, there should be no evidence that they lived at the same time as humans; but if creation is true, we should find historical memories of encounters with them.

Without a doubt, if you saw a huge dinosaur, you would tell your kids about it. And when they had kids, they would pass the story on. Eventually, as the creatures became rarer, the story would be embellished by added details, but a kernel of truth might remain in the folklore of civilizations. And that is what we find. Individuals who were known to history as real people encountered or chronicled great reptilian beasts called dragons. Alexander the Great, Beowulf, Herodotus, Asian kings, Indian warriors, St. George who "slew the dragon," sailors of many nations and centuries, and many more are remembered for their exploits with extraordinary creatures.

In recent years, several creationists have also discovered physical evidence of human encounters with such beasts. For example, American Indians have many legends of fearsome creatures such as the thunderbird, but they also left numerous rock pictographs indicating they had real interaction with them, both flying and walking. Drawings in Utah, Arizona, Colorado, and elsewhere document this. 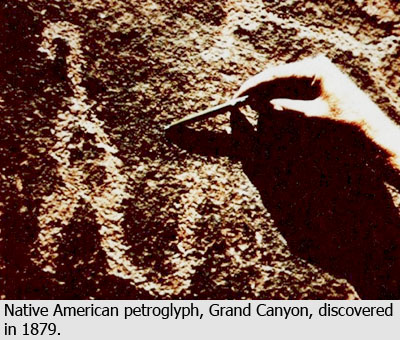 A monastery in Cambodia built in about 1200 A.D. includes carvings of numerous creatures on its ornate walls, creatures that evidently lived nearby. It also includes an explicitly clear carving of a stegosaur. Remember, dinosaurs were not discovered and reconstructed by scientists until the 1800s.

Aborigines of Australia etched an episode of numerous hunters gathering around a watery inlet and spearing a marine reptile like a plesiosaur, complete with long neck and powerful flippers. They must have killed and butchered it, for the pictograph also depicts its internal organs.

Experts have documented many thousands of ceramic figurines in Mexico, collected by a local merchant. Excavated from graves predating all known cultures, they date back to at least B.C. times. Many of the figurines are apparently of dinosaurlike creatures portrayed in living postures. It appears that an entire culture was engaged in their production. 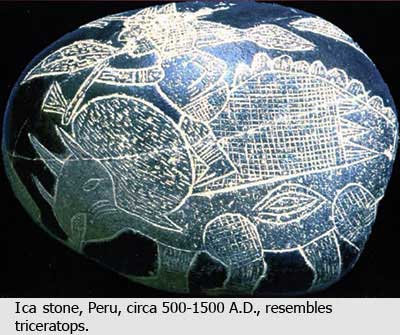 In Peru, numerous burial stones have been excavated from graves. They depict various scenes, from human medical operations (or perhaps human sacrifice) to men interacting with great beasts that look like modern reconstructions of dinosaurs. Some have long necks and long tails; others have pointed structures on their spines, small forearms, and vicious teeth. 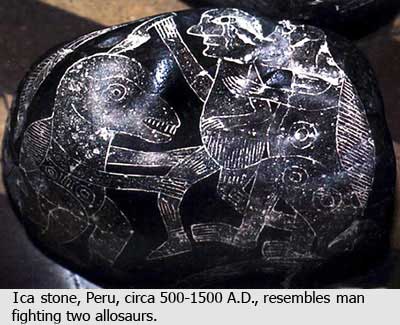 To those who value the biblical data, the frequent mention of "dragons" is of interest, as is the lengthy descriptions of "behemoth" and "leviathan" in the book of Job, written soon after the great Flood. God is the speaker in the narrative that describes behemoth in Chapter 40 as being of enormous size, with bones like iron and a tail like a cedar tree. The leviathan in Chapter 41 has terrible teeth, scaly skin, and the ability to breathe fire. Sounds like a dinosaur to me.

Surely the evidence is clear--dinosaurs and humans lived at the same time, just as it says back in Genesis!