Regular Acts & Facts readers know I have long studied the methods uniformitarian scientists use to assign ages to the deep ice cores of Greenland and Antarctica. Although Bible skeptics claim these cores present an unanswerable argument for an old earth, creation scientists can plausibly account for the excessive ages secular scientists assign to them.1-3

Although Bible skeptics claim these cores present an unanswerable argument for an old earth, creation scientists can plausibly account for the excessive ages secular scientists assign to them.

Ages for the ice cores are usually tied to the ages uniformitarian scientists assign to deep seafloor sediments. Those ages, in turn, are assigned by the astronomical (or Milankovitch) ice age theory,4 which claims ice ages are paced by slow, gradual shifts in Earth’s orbital motions that cause subtle changes in the way sunlight falls on Earth. Most secular scientists believe the astronomical theory is correct because of the well-known 1976 paper “Variations in the Earth’s Orbit: Pacemaker of the Ice Ages.”5 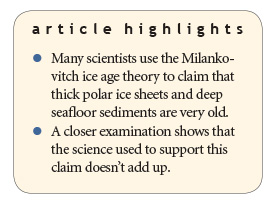 Early in my investigation of these claims, I realized the Pacemaker results depend on an age assignment of 700,000 years for the most recent reversal of Earth’s magnetic field.6 Secular scientists used this reversal, located at a depth of 1200 cm within a western Pacific sediment core, to assign ages to the two sediment cores used in the Pacemaker analysis. Yet, secular scientists now claim that the age of this reversal is 780,000 years!7 After replicating the original results, I re-did the Pacemaker calculations taking the new reversal age into account. This revision significantly weakened the argument for an astronomical influence on climate.8 My recent Acts & Facts articles show how you can confirm these results yourself.9,10

However, secular scientists have made other revisions to the data. For instance, the newest versions of the data sets used in the Pacemaker paper are a little different from the 1976 versions. Also, secular scientists now claim the depth of the magnetic reversal within the Pacific core was actually 1170 cm rather than 1200 cm.11

Although it’s very unlikely, there is a slim possibility these changes could cancel each other out so that results of the Pacemaker analysis are again in agreement with Milankovitch expectations. For this reason, I am in the process of re-doing the calculations after taking all the changes into account, as well as possible distortions within the two sediment cores used in the Pacemaker analysis. Preliminary findings suggest the results will not be kind to the Milankovitch theory.

Work on this particular project has been very fruitful, resulting in the toppling of an iconic old-earth argument.

My work on this particular project has been very fruitful, resulting in the toppling of an iconic old-earth argument. ICR supporters, thank you for your generous giving that make this research possible.