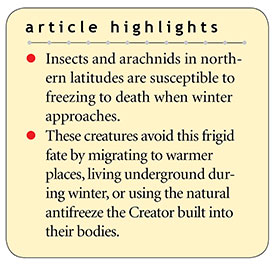 On hot July days you might miss winter’s chill.1 In higher latitudes, however, it’s the coldness that needs mitigation. For example, Arctic insects and arachnids are cold-blooded, so freezing to death is a real possibility!

How can insects and arachnids withstand frigid forces of frost and freezing?2  The answer highlights a strong apologetics argument for creation. Evolutionists are routinely guilty of the oversimplification fallacy, as if creature survival traits implement “one size fits all” simplicity.3 The opposite is true—God loves variety and intricate details, so don’t be surprised when He employs diverse problem-solving strategies to overcome the same problem. With careful bioengineering (including environmental tracking programming), God has providentially prepared multi-legged creepy critters with five very different solutions to avoid being fatally frozen.

Options 1 and 2: Live Where It Never Freezes or Migrate There

The easiest survive-the-cold strategy is to live, as jungle bugs do, where it never gets cold enough to freeze. Another avoidance strategy is seasonal migration, illustrated by monarch butterflies, which migrate south for overwintering, then return north with the warmer spring weather.4

Some nonmigratory social insects, including ants and termites, survive winter by hunkering down in diapause, a state similar to hibernation, in underground colonies located below the frostline. There they stay warm and feed on stored food as they wait for spring.5

An amazing survival option for many insects and spiders is to safeguard their hemolymph—essentially bug blood—with built-in “antifreeze” biochemicals. God designed some insects with physiologies that actually lower the hemolymph’s freezing point, using thermal hysteresis proteins (“antifreeze” proteins) in conjunction with sugar polymers such as xylomannan and/or glycerol.6,7 Most insects that survive frigid temperatures use this “antifreeze” option, but some insects are actually able to tolerate some amount of freezing.6-8

As a matter of cold logic and biochemistry, these super-cool critters can’t be lucky products of evolutionary magic.

How would beetles evolve these magnificent adaptabilities, phenologically indexed to Earth’s annual temperature and photoperiodicity rhythms? There is no way that random mutations accidently “emerging” along insect or spider genomes could ever program bug physiologies to so successfully fill super-cold habitats. As a matter of cold logic and biochemistry, these super-cool critters can’t be lucky products of evolutionary magic. They instead demonstrate God’s creatorship!